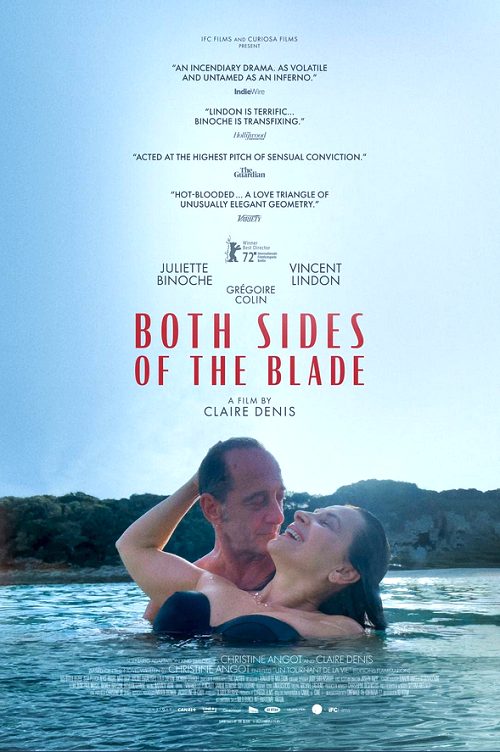 Opening on Friday, July 8, at the Laemmle Royal Theatre in West Los Angeles was Claire Denis’ Both Sides of the Blade (France, 2022), a pandemic-era melodrama that reunites Juliette Binoche and Vincent Lindon that plays like the twilight version of Denis’ Let the Sunshine In (2017). Also written by Christine Angot, Both Side of the Blade (Avec amour et acharnement) features Juliette Binoche as a lovelorn woman seeking companionship in vain. The slow build in the first hour as we navigate a quintet of characters and how they’re connected, all set to a soundtrack befitting a brooding thriller. But the mood is meant to match the interior rumblings of its heroine, a woman unable to vocalize her true feelings for a variety of reasons, the most important one being her selfishness. The film is an authentic portrait of long-term relationships and their tendency to result in strained or non-existent communication regarding feelings and desires.

Claire Denis, during a panel in New York in March 2022 claimed that Both Sides of the Blade was almost her last film, and that Vincent Lindon helped pull her out of a pandemic rut to make the movie. “Vincent Lindon called me and said, ‘You cannot stay home and be cooking all the time. It’s insane. Please, you can write a story during the summer and we can shoot in the winter,’” Denis said. “I thought, ‘No, no, no, I can’t.’ Vincent said, ‘We don’t know what the future is going to be so please do it.’” Denis added, “Somehow, it was easier than I thought.” And then Claire Denis turned around to make Stars at Noon (2022), her new thriller set in 1984 Nicaragua – which is much awaited in theatres after garnering the Grand Prix at Cannes 2022.

Sara (Juliette Binoche) and Jean (Vincent Lindon) are in a committed, stable relationship of ten years. Though comfortable, he’s a bit skittish about sharing details concerning his son Marcus (Issa Perica), who is raised by his mother (Bulle Ogier) due to his incarceration regarding a vaguely defined ill-advised venture. Prior to being with Jean, Sara was in a relationship with his best friend Francois (Gregoire Colin), who suddenly resurfaces, sending Sara’s emotions into a tailspin. As Francois approaches Jean concerning a position as a middleman at his new sports recruiting agency, Sara’s concealed emotions for Francois are unleashed, compromising her relationship with Jean.

Denis spends the first half of the film slowly doling out information about Jean, Francois and Sara. Initially, it seems Sara and Jean are having the time of their lives on a sun-dappled vacation, but clearly this is not the case. He’s unable to communicate effectively about his biracial son Marcus (Issa Perica), who lives with his grandmother (Bulle Ogier), much to Sara’s chagrin, while she doesn’t bring up her own related issues concerning “white thinking” in one of a couple interviews she gives at work on an NPR-like radio station. But these are small threads which lead to the more problematic issue –-Sara’s feelings for her first love, Francois, whose return causes her life with Jean to unspool rather quickly. It’s amazing how adept Angot’s script feels regarding stifled conversations, played effectively by Lindon and Binoche, who spend their time talking in circles or in code. This makes for a rather frustrating first hour until we come to realize the extent of Sara’s gaslighting of Jean.

Juiette Binoche embodies Sara as a woman who doesn’t have the courage to be transparent with Jean and thus compromise the stability he’s afforded for the past decade. Details are muted concerning the crime which landed him in prison, but it paints a portrait of a man made vulnerable, stretched thin across an impossible set of standards he can’t possibly meet, including for his troubled son. Denis regular Gregoire Colin is the returning lothario, but this is really a Binoche/Lindon vehicle, as evidenced by their increasingly agitated conversations, playing out like the middle-aged rendezvous of Jules and Jim.

Before they met, Sara was with François (Grégoire Colin), who also happens to be Jean’s best friend. And one day, in walks François back into Sara’s life via a chance sighting, and while François doesn’t see Sara at first, she becomes engulfed by the possibilities of what another life with him could be. The characters exist in airtight bell jars – together, and then separately – making connection nearly impossible. There’s something broken in Jean (Vincent Lindon), and perhaps he didn’t realize just how bad it was until Sara says, too casually, “I saw François today.” He is also drawn to his old friend, a sketchy guy who represents an entryway into the criminal underworld again. When Jean accuses Sara of being in François’ “grip,” she could say the same thing to him.

Binoche is all raw nerves. It’s a destabilizing kind of performance, because she lies, to herself and to Jean, so much so that when she speaks the truth it sounds like a lie. She is so placid and competent in the opening scenes, and the mask falls away so completely when she sees François that you wonder how she managed to carry on with this new relationship at all, let alone for a decade. There’s an urgency in all of these confrontations and contradictions. Every moment is life or death. It’s exhausting, but again: Love is not known for being sedate.

Sara has intricate conversations with heavy-hitting intellectuals on her radio show, but falls apart when trying to be forthright with her intimate partner. Jean is loving and kind to Sara, but avoids his struggling son. Sara loves Jean, but can also say with a straight face that he is “controlling” her, even though we have seen little to no evidence of that. Perception is all. If she feels it, she feels it. The truth is different depending on where you stand, and in a bell jar there’s not enough room for everyone. No matter which way you try to make a move, you bump into someone else.

Denis is sensitive to environment and atmosphere. Consider Sara and Jean’s apartment. We really only see the bedroom, where Sara spends so much time lying in bed, her back to the camera. There doesn’t seem to be a lot of space. The balcony, looking out on the city rooftops, is a huge presence: It’s a No-Man’s-Land, a neutral space, where the warring couple can come back together. But it’s also a place of escape and secrets. Consider, too, Jean’s driving. He spends so much time driving back and forth between his apartment and his mother’s, outside of the city. He does his grocery shopping out near his mother’s house. But he never stays to visit, and avoids his son. This “quirk” is never mentioned outright but it’s fascinating. Why drive over an hour to go grocery-shopping, right down the street from your mother’s house, and not stop by to say hello? Maybe being behind the wheel gives Jean a sense of control he lacks everywhere else.

Claire Denis’s new film is a seductively indirect love triangle, a drama of the mind as much as the heart. It’s intriguing if contrived and anticlimactic, though acted at the highest pitch of sensual conviction. The movie interestingly shows that when a person is having an affair, they are capable of the most profound emotional doublethink. On the one hand (or perhaps on one side of the blade) this person is able to be happy in the marriage and yet also passionately infatuated with the other person.

Lensed by Eric Gautier, this isn’t Denis’ most visually lavish production, per se, but it’s an intimate face-off between lovers left alive, featuring another perfectly resonant score from Tindersticks, whose signature song “Both Sides of the Blade” gives the film its title in English. As ever, Denis charts how the vicissitudes of modern life (even COVID face masks feature prominently here) get in the way of meaningful romantic connections. Binoche is enthralling to watch in freefall as she waffles and flounders between two loves, with the erupting jealousy between Jean and François threatening to capsize it all.