At the Sierra Madre Playhouse Solo Shows Festival, Independence: The True Story of Dr. Mary Walker tells the story of the first female surgeon in the U.S. Army who became the only woman ever awarded the Congressional Medal of Honor.

“Let the generations know that women in uniform also guaranteed their freedom.”

At the Sierra Madre Playhouse on Saturday, April 9, 2022, at 8:00 p.m. and on Sunday, April 10 at 2:30 p.m., actor Kathie Barnes plans to chew deeply into the role of Dr. Mary Walker (1832-1919). She believes this part will allow her to create a banquet of a performance. Barnes gratefully accepted the role when given the chance to play the American hero in the one-woman show. Written and directed by Lloyd J. Schwartz, Independence: The True Story of Dr. Mary Walker is a passion project across the board. 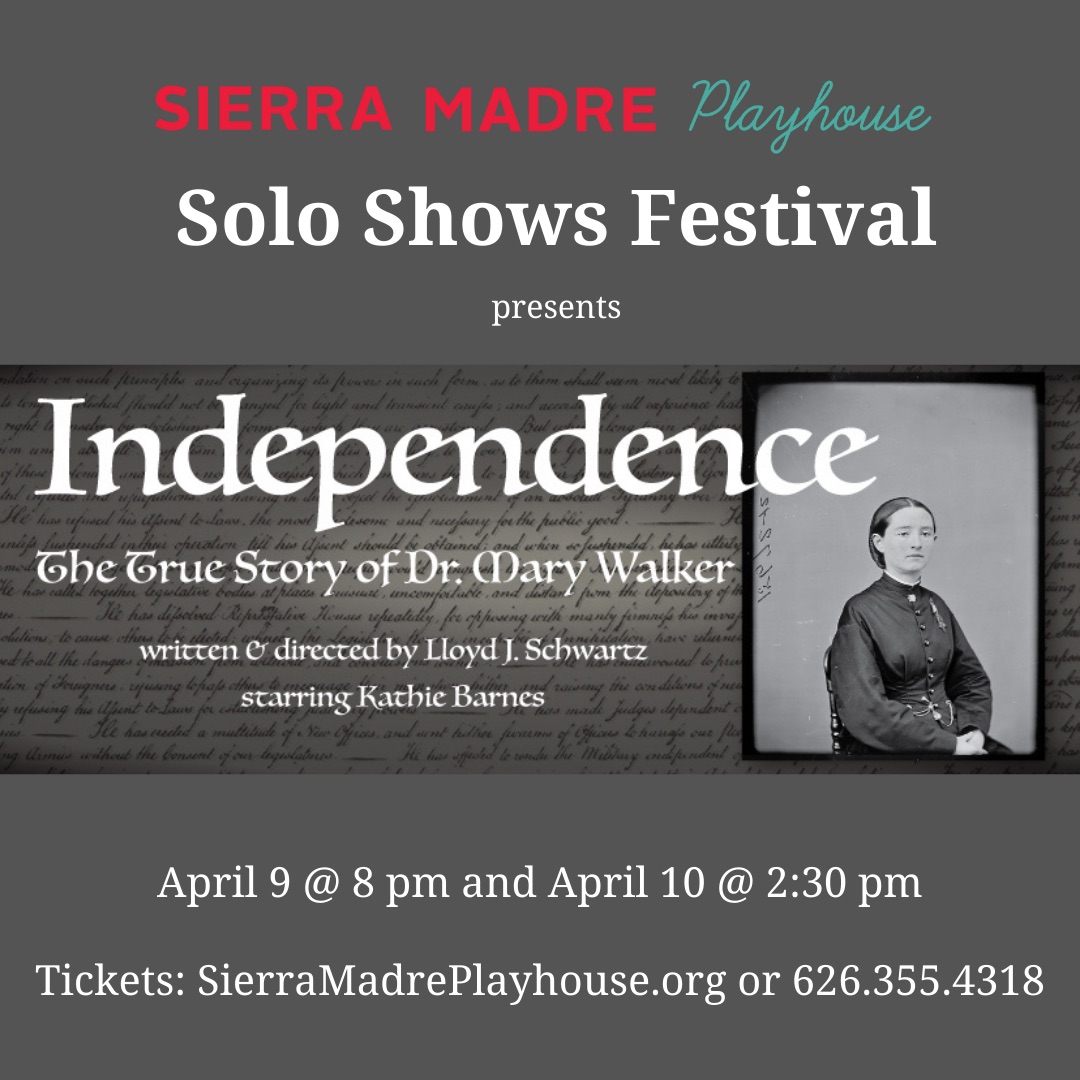 A successful television creator who wrote and produced shows from Alice and The Love Boat to The A-Team and Harper Valley P.T.A., Lloyd J. Schwartz also created the long-running Storybook Theatre at Theatre West. With his wife Barbara, he has produced thirty-four plays. However, his deep dive into the life of Dr. Mary Walker is a love letter of recognition and respect to a forgotten American hero.

Perhaps no American hero has been more subjugated by the patriarchal nature of American history than Dr. Mary Walker. As the first female surgeon in the U.S. Army, she is a legend for breaking glass ceilings. A suffragist and an abolitionist, she became a spy for the Union, crossing lines into Confederate states and returning with valuable intelligence. Near the end of the bloody conflict, she endured four months in a Confederate prison camp. To this day, she remains the only woman out of over 3500 recipients to be awarded the highest honor of the United States: The Congressional Medal of Honor.

Although her ordeal as a prisoner of war diminished her health for the rest of her life, Dr. Mary Walker did not slow down. Fighting for women’s equality in an unjust society, her passion for her cause was reflected in her appearance. Indeed, after the war, Dr. Mary Walker attired herself in “reform dress,” a skirt over trousers. Before the term was coined, she was a radical feminist, and Independence: The True Story of Dr. Mary Walker tells her story. Battling against the innate sexism of the time, she transcended a broken heart due to a philandering husband and found meaning in her crusade for equality and justice.

Actor Kathie Barnes inhabits the role of Mary Walker and brings her to life on stage. Despite the California connections of Lloyd J. Schwartz, Independence: The True Story of Dr. Mary Walker had its world premiere at The Women’s Convention in Seneca Falls, New York, in 2017. The convention celebrated the century mark of women attaining the right to vote. Although she was near the end of her life when this happened, one can only imagine the satisfaction felt by Dr. Mary Walker at that moment. After all, fighting for a just cause and standing up for what was right stayed at the forefront of her life. It is wonderful to see the story of Dr. Mary Walker’s life brough back home to Southern California.

To purchase tickets for the show online, go to http://sierramadreplayhouse.org or call (626) 355-4318 to make reservations. The play is at the Sierra Madre Playhouse at 87 W. Sierra Madre Blvd, CA 91024. Just east of Pasadena, there is parking on the street and in free lots behind the Playhouse.