Los Angeles, California (The Hollywood Times) 11/14/17 – “Thank you for coming out to The Citadel Outlets here in the beautiful city of Commerce.  It is our pleasure to have you here and enjoy yourself, be safe and have a Happy Thanksgiving then a Merry Christmas. Thank you so much and enjoy yourself.”  Mayor of the City of Commerce Oralia Rebollo told the audience.

Tony McEwing, Marla Tellez and Bob DeCastro were on hand to host the Citadel Christmas tree lighting concert.  The event will be broadcast on Fox Channel 11 on Thanksgiving night at 8:00 p.m.  Tony McEwing has been part of this concert for over six years now.  They talked about the other past entertainers that have been onstage at the prior years like Demi Lovato, Ariana Grande, Justin Bieber, Victoria Justice and told the screaming young ladies that Forever In Your Mind would be coming up soon along with John Lindahl and the All-American Boys Chorus.

Tony McEwing told the crowd that the building behind the stage was not there last year and it houses four of Marla and Bob’s favorite shops, Tommy Hilfiger, Coach, Hugo Boss and Guess.

They introduced those involved with the design and building of the new structure.  Tracy Markel, Director of Marketing of Citadel had each of them come up on stage to acknowledge them.  “How do you like our beautiful new building?” Tracy Markel told the crowd.   She said they tore down the old building and started building the new one in February. It opened last week.

It was a great celebration and amazing concert. Don’t forget to watch it on Fox 11 Thanksgiving night at 8:00 p.m.  Gather the family after dinner and enjoy the concert.

THT: What brings you out the Citadel tonight?

Orion: I am opening up for the band Forever in Your Mind.

THT: What is the name of your band?

THT: When did you start performing?

Orion: I started performing when I was four years old and I saw the movie Grease with Danny Zuko in it and it was so unbelievable.  Ever since then, I started doing everything from plays to singing. My grandfather showed me Elvis Presley and I feel in love with Elvis. I really like him, Michael Jackson, Prince and James Brown.

THT: What do you want for Christmas?

Orion: I think love, peace and joy in the world because we really do need it right now. I would like an electric guitar.

THT: What is happening in your career right now?

Orion: I am actually sending in bids for auditions right now. I have a very big audition coming up next week and I can’t say the name of it, but it’s very big and it’s going to be on TV.

THT: What are you looking forward to tonight?

John: I am looking forward performing with my friends onstage and I will hav e a full band and feeding off the energy of them and the crowd. I am super pumped.

THT: What do you want for Christmas?

John: Honestly, my sister is coming home from college so I am really excited to spend time with the whole family, my Mom, my Dad and Sister. I also love Nintendo Switch and there is a new game coming out called “Mario Odyssey” so I will want to check that out. I am very into video games and when I am not working on music, I’m playing video games.

THT: How long have you been singing?

John: Since I can remember. I have been performing in stage productions since I was five. I did musical theatre when I was younger. I was JoJo at the Gem theatre in Garden Grove.

John said he just turned 21 and was excited about that and that he as been so busy with work, that he hasn’t even used his right to drink yet at 21.

THT: What type of car do you drive?

John: I am leasing a Chrysler 200 right now. My favorite car that I have ever had though was a 2002 Toyota Celica midnight blue. My little racecar, my bat mobile.

Forever In Your Mind Interview:

How did you get started?

Emery Kelly: Forever in Your Mind started about four years ago on the X-Factor, Simon Crowell discovered us, when we were off the X-Factor, Ricky and I were doing performances around LA and we had a performance in New York, and I called up my cousin Liam, who is my cousin, our Moms are Sisters, which is pretty cool. We just needed a guitarist to play for us for this big crowd of 1,500 people. It was and it was Liam’s first performance.

I asked Liam Attridge if he was nervous. He said “not really, we had a music theatre background, so we were all okay performing for a big crowd.” I really don’t get nervous.

What musical instruments do you play?

Ricky Garcia. I like the piano a lot. I’m not that good at it, but I listen to something and try and learn it and eventually I will. I have a decent hear, since I am in music. I play a little guitar, I used to play trombone.

What’s the first song you remember singing?
Emery Kelly: Probably when I was out of the womb

Liam Attridge: I used to hmm and sing myself to sleep.

Ricky Garcia: My Mom always like Aretha Franklin and soul, she was born in the 70s and I would listen to soul music. Mary J. Blige, I have always been a big fan of hers.

What do you want for Christmas?
Liam : Appreciation

Ricky: My whole family together

Emery: This is going to be ridiculous, but this year I actually want socks and underwear. Calvin Klein underwear, but I really need socks and I want them.

The concert was a huge hits for all the screaming young ladies that had been waiting for hours for it to begin.

On October 23, the World’s Tallest Live-Cut Tree arrived at Citadel Outlets after traveling nearly 600 miles from the Shasta-Trinity National Forest. This beautiful White Fir tree is 115 feet tall and has been decorated with approximately 18,000 LED lights and 10,000 ornaments and bows! This larger-than-life display is designed to spread holiday cheer and create a special shopping experience for all of our guests that is so L.A. Join us this season to snap a photo and score your festive #CitaDEALS in style!

Fun Facts:
The tree spans 20 feet longer than an NBA basketball court.
The tree stands more than twice as tall as the letters of the Hollywood Sign.
The tree is 40 feet taller than the average Rockefeller Christmas Tree in New York City.
Near the end of its lifespan, this tree is part of an important forest manicuring process that frees up forest space for smaller trees and keeps the forest healthy. In the interest of forest preservation, 12 replacement trees are planted in its place. 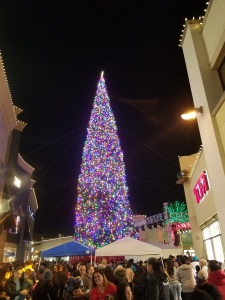 Doors open at 8:00 pm on Thanksgiving!

Located just 10 minutes south of Downtown L.A. on the I-5, Citadel Outlets is the smartest choice for holiday deal-hunters. With 130 world class brands together in one location – and mega savings at each brand ON TOP OF the center’s daily commitment to 30-70% off retail prices – and breathtaking, record-setting holiday décor, Citadel Outlets’ Moonlight Madness sale promises an all-night, 27-hour shopping experience not only unlike anywhere else in Los Angeles but unlike anywhere else in the world.

While pausing to rest and refuel between deals, shoppers are invited to can pose for holiday photos in front of the World’s Tallest Live-Cut Christmas Tree (115-ft) adorned with over 18,000 twinkling lights, donate a new, unwrapped toy in the toy drive bins at the Customer Service Center or snap a shot of the World’s Biggest Bow from the palm tree-lined Citadel Outlets Drive.

Santa Claus will be posing for photos in his House every day from 11:00 am – 8:00 pm starting on Friday, November 24 and continuing until Christmas Eve. On Sunday, November 26, from 6:00 pm – 8:00 pm, shoppers are invited to bring along their furry, feathery or fuzzy friend for a special “Pet Night with Santa” photo opportunity!