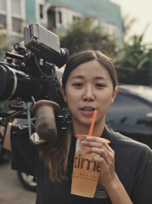 By Fanny H. and Valerie Milano

Los Angeles, CA (The Hollywood Times) 3/16/21 – Born in colonial Hong Kong, Kayla Tong is a strong and inspiring artist, cinematographer, and director. Like many Hong Kongers of her generation, Kayla is in search of cultural identity and considers hers as « rootless ».

Her “rootless” upbringing and her many encounters with people from all around the world, inspire much of her work, telling stories of diaspora, exile, and marginalized communities.

Driven by her passion for film and concerned about the misrepresentation of her communities, Kayla Tong has been applying herself to explore and capture the richness and the evolving identity of Asian cultures.

For Kayla, giving a voice to her communities is of great importance, and the majority of her documentary works relate to her engagement towards the integration of minorities.

« A lot of my work deals with displacement, minorities in the society, and people moving to foreign places. The artistic process allows me to examine my own life. » — Kayla T. says

The 4-part documentary, “The Paradise We Are Looking For” (2019), directed by Quyên Nguyen-Le, is one of them: it shows the « refugee city », a hidden part of San Diego, mapping its cluster of neighborhoods, militarized zone, and its Asian American community, across ethnicity, geography, and history.

In this collection of four short documentaries, commissioned by the Pacific Arts Movement, on the occasion of the 20th anniversary of the San Diego Asian Film Festival, the segment “The Morning Passing on El Cajón Boulevard” in which Kayla Tong served as a cinematographer, introduces the audience to the Goodbody Mortuary on El Cajon Boulevard in San Diego, a former catholic church converted into a funeral home, specifically designed to carry out traditional Vietnamese funerals.

The history of Asian American film festivals is both expansive and long: they take place in Los Angeles, New York, Seattle, San Diego, and Philadelphia, among other cities. The Asian American International Film Festival, which is held by Asian CineVision in New York City, dates to 1978.

« Asian American film festivals are not just about movies anymore, and they haven’t been for years. These days, the events are intersectional spaces for creativity and community. » — NBC News

As an acclaimed cinematographer and engaged artist, Kayla Tong has worked with highly influential people, who aim to change the misconceptions of an evolving Asian culture and to be involved in political projects.

“I am Herbert Chow” was the campaign documentary Kayla Tong was in charge of co-directing and shooting when Herbert Chow announced his run for the (later canceled) Legislative Council Election in 2020.

Currently, Kayla Tong is near completion with her work “Things I Never Said” (Directed by Wendy Wang), a feature documentary focusing on the intergenerational and sociocultural differences contributing to the stigmatization of mental health in Asian American communities.

As a Busan’s Asian Film Academy‘s cinematography fellow, a Visual Communications Armed with a Camera Fellowship directing fellow, and a recipient of European Union’s Erasmus Mundas Scholarship, Kayla Tong is the legitimate voice of minorities.

Discover her work and photography: