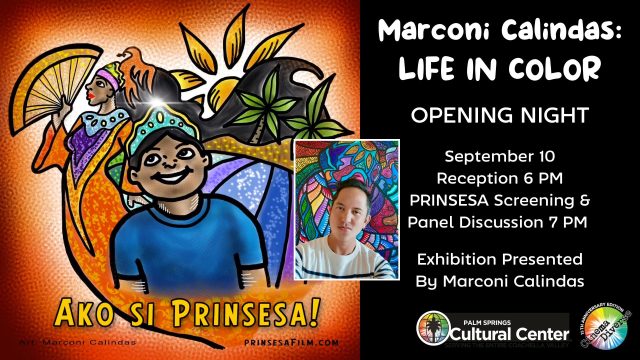 Cinema Diverse: The LGBTQ+ Film Festival (CD) is pleased to announce that Filipino-born artist Marconi Calindas’ latest exhibition, “Marconi Calindas: Life in Color,” will open September 10 upstairs in the VIP Lounge at the Palm Springs Cultural Center (PSCC) as part of  the festival’s 15th Anniversary celebration. The exhibition will run the duration of the film festival: September 15 – 18, and September 22 -25 and will be open for public viewing during theater operating hours through Palm Springs PRIDE. The exhibition includes Calindas’ new masterpieces depicting “heroes of the past and the inspiration of today.” Calindas dabbles on black lines and pure hues as his trademarks of distinctive rendering style, with subject matters varying from pop icons to triumphs of the human spirit.

Calindas has displayed his work in multiple public art projects, including the San Francisco City Hall, the Children’s Creative Museum, soMARTS Gallery SF, the special bins art for the Coachella Arts and Music Festival for 2019 and 2022, and more. His work has also been shown in exhibitions in New York City, Minneapolis, and other cities. His art has been included in the internationally published book, “Can Art Aid in Resolving Conflict?”

His art direction for the short film PRINSESA (2014) won him Outstanding Art Direction during the Scary Cow Short Film Festival in San Francisco. The short film garnered more awards in International Film Festivals, and earned an Audience Favorite award at Cinema Diverse in Palm Springs. PRINSESA will be screened immediately following the opening of the art exhibition.

Marconi is currently a resident of Palm Springs, where he has been very active in the public arts and manages an art-studio gallery, Galleria Marconi, with his husband Adam Cafege.

PRINCESA will be screened at the art exhibition opening night reception on September 10. The reception begins at 6 p.m., followed by the screening of the short at 7:00 pm, and a panel discussion with the artist will take place after the screening.  Tickets can be reserved at https://www.eventbrite.com/e/393453539127

Cinema Diverse: The LGBTQ+ Film Festival  is dedicated to advancing and further strengthening our diverse gay community through the establishment of a world-class film festival that presents lesbian, gay, bisexual and transgender cinema from around the world.  Each year, we invite filmmakers, writers, directors, producers, actors, film artists, film lovers, distributors and other industry professionals to join us in Palm Springs for an exciting celebration of the motion pictures that reflect, inform, enrich and often transform lives. All Access Passes, Six Packs, and Tickets can be purchased at www.cinemadiverse.org