Los Angeles, CA (The Hollywood Times) 9/19/22 – The first season of Chucky was dubbed one of the top new cable drama series of the year, with season two kicking off just in time for Halloween. In this season Chucky is seeking revenge on those responsible for ruining his plan to invade children’s hospitals across the country. Last week THT participated in the TCA (Television Critics Association) virtual press panel to discuss the upcoming season with the shows cast members and production team. Some of the guests included; Zachary Arthur, Bjorgvin Arnarson, Brad Dourif (voice of Chucky), Alyvia Alyn Lind, Devon Sawa, Jennifer Tilly, and Showrunner/Executive Producer Don Mancini.

Mancini was asked by one of the TCA panelists how Chucky was able to stay relevant over the last 30 years and why it translates so well to TV series format? He contributed it to the good graces of the fans. “We are very grateful to them. I think one of the most important aspects of the sustained popularity of the character is due to Brad Dourif and his performance, which I think is indelible. And the puppeteers, who are led by Tony Gardner and Peter Chevako, they are amazing. And I think in tandem, they bring Chucky to life to such a degree that we on set can all take it for granted. You know, he is just the kids; co-star, Jennifer’s co-star, or the actor that me and my fellow directors are directing. But secondly, I think Chucky; works well as a television series because for years with the films would already set the precedent of doing serialized, ongoing, narrative storytelling. We have been spinning this continuous web over decades. So, to be able to do that now at an accelerated pace, and to go through eight hours of story per season, that’s really exciting. Because it allows us to get more into the character’s history, and relationships, and go down different avenues and explore characters that fans have been wanting to know more about. This year we learned more about Glen and Glenda, and what has been going on with them. Fans have been wanting to know about that since 2004. And the YA element is a good fit for Chucky because aesthetically, we love to do over the top stylistic, grandiose, visual stuff. And I think that’s the way teenager’s emotions work. Teenager’s emotions are over the top and big. That’s how you experience things when you are a teenager. Everything is incredibly vivid. So, our franchise is a great fit for that.”

The Hollywood Times asked Brad Dourif how he has evolved with the Chucky character since its inception in 1988? Dourif had this to say; “Well, I am 72. So, one of the things that happened is I got old, which is very strange. I don’t know. I think — you know, Don Mancini is of all the collective unconscious, and collective unconsciousness of Chucky, he is the God thereof. And most of my evolution comes from his imagination. I always felt — I mean I felt that Don’s ability to grab where horror was going, how the genre changed, and adapt was always unique and extremely fun. He is the reason. Why this thing continues to work, and why Jennifer and I still have a job from many years. Sometimes it is really — I know the character well, so, I feel like I should be able to go in there and do it, but Don always comes up with shit that makes it harder.” 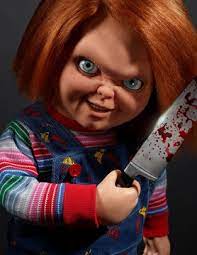 Viewers can expect more surprises as the season unfolds on Wednesday October 5 at 9:00 p.m. on both USA and SYFY networks.