Christopher Plummer, whose iconic role as the debonair Capt. Von Trapp in “The Sound of Music” was one of many acclaimed performances that led him to an Oscar and a pair of Emmy and Tony awards during his 50-year career in film and onstage, has died.

The Canadian leading man and character actor, who also starred in “All the Money in the World,” “Beginners,” “A Beautiful Mind,” “Up” and “Star Trek VI,” died early Friday morning at his home in Connecticut with Elaine Taylor, his wife of 53 years, at his side. He was 91.

Arthur Christopher Orme Plummer CC (December 13, 1929 – February 5, 2021) was a Canadian actor whose career spanned seven decades. He gained recognition for his performances in film, television, and theatre. Plummer made his Broadway debut in 1954, and continued to act in leading roles on stage playing Cyrano de Bergerac in Cyrano (1974), Iago in Othello, as well as playing the titular roles in Macbeth, King Lear, and Barrymore. Plummer also performed in stage productions J.B., No Man’s Land, and Inherit the Wind.

Plummer was born in Toronto and grew up in Senneville, Quebec. After appearing on stage, he made his film debut in Sidney Lumet‘s Stage Struck (1958), and won great acclaim with audiences for his performance as Captain Georg von Trapp in the musical film The Sound of Music (1965) alongside Julie Andrews. 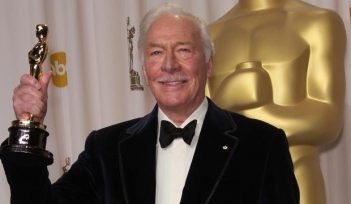 Plummer received various accolades for his work, including an Academy Award, two Primetime Emmy Awards, two Tony Awards, a Golden Globe Award, a Screen Actors Guild Award, and a British Academy Film Award; he is one of the few performers to receive the Triple Crown of Acting, and the only Canadian. He won the Academy Award for Best Supporting Actor at the age of 82 for Beginners (2010), becoming the oldest person to win an acting award, and he received a nomination at the age of 88 for All the Money in the World, making him the oldest person to be nominated in an acting category. (Wikipedia)

The Hollywood Times had the pleasure of covering the TCM Classic Film Festival Hand and Footprint ceremony back in 2015 honoring Christopher Plummer.