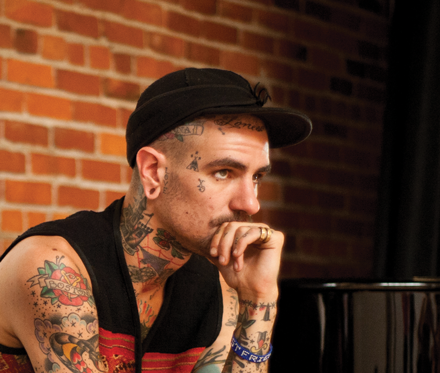 Los Angeles, CA (The Hollywood Times) 3/12/21 – If there’s one word that can aptly describe Christopher Mansfield, it’s got to be “transcendental”. Why? Because he’s the spitting image of a modern Thoreau (with just a few more tattoos). Mansfield is a man who truly understands and appreciates music in the most earnest of ways. I had the pleasure of sitting down and talking with Mansfield about a wide variety of topics this past Wednesday. We started off by discussing the pandemic and how it’s affecting him. Christopher says he stays in most of the time anyway, so it hasn’t affected him as deeply as it has others. We moved on straight to talking about the reissue of his critically acclaimed 2019 album Failure Sculptures. I had to ask: Why go back? Why not go forward? To my surprise, Mansfield said he actually will be releasing new music around April 16th! But the answer to the question was that he felt that he wanted to go and give some of those songs another go. Essentially, why not? Every artist wishes they could do at least one song or five over again, don’t they? If not simply to see what else they can do with that particular piece, then perhaps to correct something they didn’t entirely love from their previous effort. For Christopher, it’s more the former than the latter, which also surprised me. Many artists view themselves as perfectionists, and while technicality serves its purpose, one shouldn’t allow it to overwhelm them to inaction or permit self-imposed fear to paralyze their creativity. It’s important to simply let go and let the music, or the art, flow out of them. It’s almost like being a vessel, a fountain, or a radio tower. 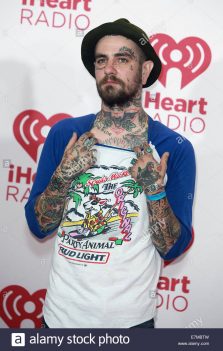 I shared a little bit with Christopher about my background and what parts of his music I connect with, specifically his references to G-d throughout the LP. I asked him what those references mean for him personally, and does he have a connection with the Divine. He said he thinks of the word “God” as the grandest and most beautiful in all of the human language. I couldn’t agree more. A tried and true fan of Jack Kerouac and David Foster Wallace is Christopher Mansfield, quoting both of them at least twice each throughout our most delightful exchange.

We discussed everything from the creative process of songwriting and music production to the semantics of success. Christopher shared with me an anecdote about a friend of his who wants to perform on the Tonight Show and when Christopher asked him why the friend could not produce an answer. Mansfield pressed him. I thought it was a really intriguing question. Why does anyone want to become famous? What does fame bring, after all? This brought us to “Arrows”, the song he wrote with Macklemore and Ryan Lewis, which talks about the meaning of fame and how it’s not exactly what people think it is. We talked about what it means to share a singular moment with millions of people in just the space of three-and-a-half minutes or so, and that being the allure of performing on TV. It was definitely one of my all-time favorite interviews. Special thanks to Christopher Mansfield aka Fences and Mike at Earshot Media for arranging this delightful exchange for us.