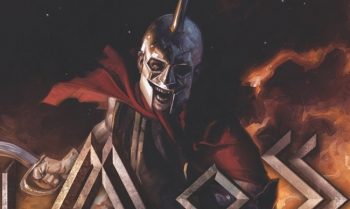 Los Angeles, CA (The Hollywood Times) 11/10//19 – Chris Jaymes is an Award-Winning writer, actor, producer, screenwriter and now author, whose screen credits include the hit TV shows Party of Five, Chicago Hope, Lost and many others. Chris has now made his writing debut with his graphic novel Sons of Chaos. Timed to the upcoming 200th anniversary of the Greek War of Independence and the 250th anniversary of the birth of Napoleon Bonaparte. The 200-page graphic novel blends the history of the Greek War of Independence with the satire of The Joker and the spirit of Gladiator and Game of Thrones.  The 19th century war reflects and resembles many of the worldwide conflicts we see today. It’s a blend of part comic, part novel, part educational tool and part history.

Chris Jaymes: From my teens, I’ve been working in some manner in the entertainment industry and the past decade more philanthropic, make the world better type of stuff. Early on, I worked primarily as an Actor and toured with some bands as a piano player. Started writing screenplays and directed a small film that won a bunch of film festivals which pushed me further into writing and directing. At this point, I still do all of those things, but I also spend a lot of energy on ocean conservation and solutions for marine mammals in captivity.

What are you best known for?

Chris Jaymes: Good question. No idea. People seem to like that I was in LOST. People that know the band BOOTSTRAPS get very excited that I played piano. Not sure if there’s a specific thing because I’ve bounced around from many things, and for better or worse, somehow I seem to be adding various new things to the pile on a regular basis.

What does it take to be a great writer in Hollywood?

Chris Jaymes: Diligence. Endurance. A good amount of force. A good amount of luck. There’s a lot of great writers in Hollywood, but they’re not necessarily always the successful ones, and vice versa. After decades of watching, it’s really about being determined and staying in the system long enough.

Have you experienced challenges along the way?

Chris Jaymes: Every day, and it’s always different. Getting people to read is a challenge. And that’s really more of the job than the writing I would say. More so now than ever. The mental/emotional challenge of staying engaged and pushing forward with no guarantee in sight regardless of how you feel is probably the most recurring challenge I’ve faced. And getting extremely far with projects and succeeding at getting the highest level of interest to have it all fall apart and disappear isn’t the most enjoyable thing to deal with, but it happens somewhat regularly.

Tell us about your new graphic novel, Sons of Chaos. 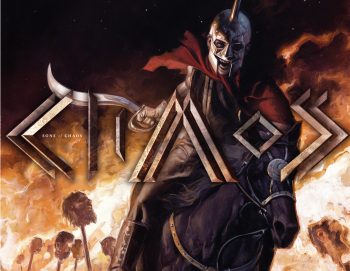 Chris Jaymes: It’s ambitious and took a significant part of my life to complete… and I could’ve never predicted that I would have created a 200-page, massive coffee table sized graphic novel about a revolution that occurred 200 years ago in Greece. But it exists after nearly a decade of work and I’m proud that it exists thankfully.

Where did you derive your inspiration from to pen a graphic novel based on a 200-year old war?

Chris Jaymes: When I initially learned about the war, it resonated with me in a strange manner. Realizing that this prime tourist destination that is seen as a cultural Disneyland around the globe filled with a constant surge of international families on holiday experienced nearly a decade of bloodshed just a moment ago in history hit me in a strangely introspective manner. The idea that the population of Greece lived in absolute chaos, uncertain of their capacity to survive on a day-to-day basis just a short time ago, with shows no sign of that whatsoever was surreal to me. And that it’s now filled with tourists that have no idea that not so long ago a revolution occurred that returned freedom to Greece and stimulated the fall of an empire… that the world can change so fast based on the agenda of leaders and that an uprising from a smaller country could stimulate the fall  of its dominant leader and yet, I had only seen Greece as a cliché idea connected to ancient gods and columns and stories of democracy and islands filled with debauchery. Taking this all in made me realize that power evolves and places transform— that the world changes fast and we can be quickly forgotten. I always loved Victor Hugo’s book about the French Revolution and saw this as an opening to tell an overwhelmingly layered story about something that had profound historical implications that very few people outside of Greece and Turkey seem to know much about.

Share the process of developing your novel. What would people be surprised to know?

Chris Jaymes: That the process went on for about a decade. That Ale, the artist and I never spent one day working together in the same country over the course of three years building the book together. That I was hospitalized three times from migraines that came from not sleeping or eating while working for days on end. That I knew nothing about the comic or book industry and had to figure it out along the way. It was a learning process where I had to ask lots of questions and get support from a lot of strangers to figure out what the heck I was doing.

Would you like to see the Son of Chaos on the big screen?

Chris Jaymes: Initially, that’s all I was wanting and hoping. Now that it lives and exists in book form, I’m very satisfied with it. And over the course of its creation, TV has evolved and now I’ve been pushing it in that direction more so than a movie. But I’d still be happy with a movie version of course.

Do you believe conflicts in the novel resemble our world today?

Chris Jaymes: Definitely. This is a war that carried on the East vs. West, or West vs. East at the surface, which many wars have been sold as, regardless of the actual agenda that was being carried out by the leaders of both sides. At a point, Greece started falling back into Ottoman control, which had a negative effect on the fund that was created for the war on the London Stock Exchange. When the investors of the fund started losing money, the West came in and funded the Greek effort with loans that were ironically paid off just prior to Greece’s economic crash. The agenda of the leaders had very little to do with what the soldiers were told they were fighting for, just like today. Today, we have very little clue with what is actually going on with our wars or our politics. It’s lost in the intentional noise spouting from all sides. At this point, I assume even the leaders are lost within the “why” they are doing what they are doing. The arena evolves but the conflicts are the same. The external battle is typically motivated by sustaining economic power through destabilization of others, but the variable comes within the psychology of the current leaders. Donald Trump is dealing with a very different psychological equation than Barack Obama was, and Obama’s is very different from George W. Bush’s and so on. But throughout history, these equations occasionally add up to mirror one another and reflect recurring behaviors for better or worse. Within the novel, I focus on the agenda of the Ottoman Pasha in charge of the north of Greece which had nothing to do with the Ottoman Empire or the wishes of the Sultan. He had armies fighting his wars, sacrificing themselves for an ideology or an agenda that had little or nothing to do with their own interests. Much like it is today with our armies and those of other countries.

How would you describe the novel in a sentence?

Chris Jaymes: An immersive experience of an epic undertaking that has gone somewhat unnoticed in the world outside of Greece and the symbolic telling of a human placed within this inconceivable reality trying to find his way.

Where can we find your novel?