On April 25th, 2021 Chinese-American filmmaker Chloé Zhao made Hollywood history as the first woman of color to win a Best Director Oscar ® for her masterful docu-drama NOMADLAND.  The film also won the Oscar ® for Best Picture.

Zhao’s American co-producer Frances McDormand walked away with her third Best Actress Oscar® for her indelible performance as Fern in NOMADLAND!

Zhao wore an unobtrusively elegant neutral-toned Hermès gown accessorized with white Hermès sneakers and her signature braids at the scaled-down Oscar® ceremony held at Union Station in Downtown Los Angeles.  The sporty vibe of Zhao’s ensemble and slightly industrial feel of the historic setting brought to mind the hardy semi-homeless road warriors of NOMADLAND with hearts and minds that are all their own. 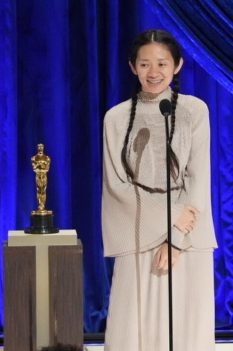 Zhao’s notable talents and total lack of pretension have endeared her even to VOGUE Magazine.  Her praises are sung wherever she goes for her chameleonic abilities to fit in and become part of any crowd.  She attributes this to her childhood and young adulthood spent mainly in multicultural Beijing, London, New York, and Los Angeles.

Zhao’s genuine respect for honest, hard-working people from all walks of life apparently struck a chord during the year-long COVID-19 pandemic that sent millions of U.S. residents into unemployment and early retirement.  The pioneering spirit of the Old West has never been so necessary in our more tech friendly times.

It may have taken the fresh eye of an emigre from the East to show us what was best about this Western land that we still love!  In this reporter’s opinion, NOMADLAND captures the true essence of this incredibly complex country like few others ever have and is destined to become an American classic.