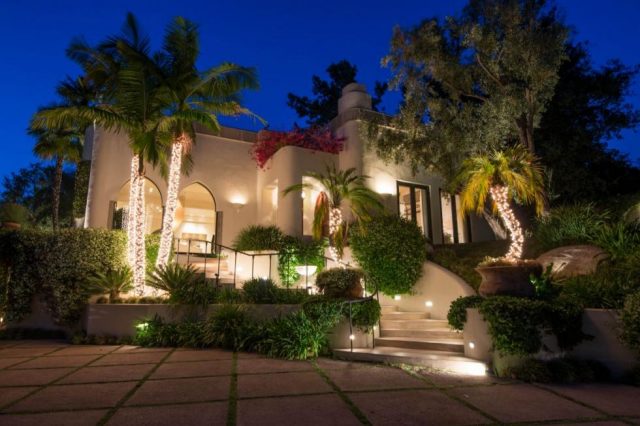 Beyond her unique contralto vocals and risque stage costumes, Cher’s less heralded but equal talent is her exquisite taste in creating elegant homes with plush rusticity. For years these homes have graced the pages of the architectural and decor authority ‘Architectural Digest’ with her style of pristine white furniture against antique wood beams and textured stucco with a touch of Moroccan influence, which catapulted into the look so replicated today. Her first serious home after her divorce from Sonny Bono, which she designed and built in Beverly Hills in 1980, is now back on the market with the new price of $68 million – $17 million below its original ask.

Cher built her mansion on the four acres she originally purchased. As her career and personal life advanced, she eventually sold the property to comedian-actor Eddie Murphy in the late 1980s. He held on to it until 1994 when new owners took over and began accumulating additional parcels of land. Over the years they turned the property into the five parcel, 14-acre premier equestrian estate that it is today – the last compound of its size in Beverly Hills.

Privately hidden from view behind massive entry gates and mature landscaping, the 20,000-square-foot unfinished main residence is in the first stage of an interior remodeling with 11 bedrooms and 17 baths. Outside are stone terraces, pool, spa, outdoor kitchen and tennis courts with cabana and seating for viewing the players. The move-in-ready detached 7,000-square-foot guest house has exotic appeal with its walk-through arches, Moroccan tile, coffered ceilings, hand-carved wooden doors, five bedrooms and five baths. Also within the complex is a large equestrian center with a luxurious stable that includes five stalls and large lounge area with slate floors and fireplace.

The grounds are reminiscent of a European park in summer with expansive lawns, flower beds, mature trees and walkways. Tucked behind foliage are two large riding rings and also a network of riding trails that wind throughout the property. Options for use include a single buyer who would live in the large guest house while completing the main mansion or for a developer who would want to build additional homes.

The home that Cher designed and built, now a five parcel, 14-acre equestrian estate in Beverly Hills has been relisted at $68 million – $17 million below its original listing price. Co-listing agents are Josh and Matt Altman of Douglas Elliman Real Estate, Beverly Hills.