NASHVILLE, Tenn. – Country music singer/songwriter Cherish Lee honors her father, Urban Cowboy singer and ACM winner, Johnny Lee, with the release of her latest music video for “Father’s Daughter.” The video features the close relationship Cherish and Johnny share, with clips of the two singing in front of crowds together and their special moments backstage. 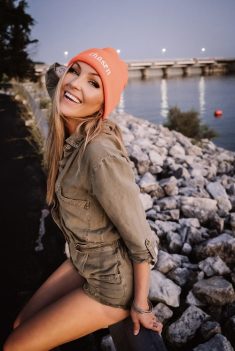 Cherish’s emotion proves just how proud she is to be Johnny’s daughter. The sentimental song lays out Johnny’s life from early childhood to hitting the road as a musician and highlights the significant impact he has had on Cherish. The video was premiered digitally by Taste of Country and will debut on Heartland TV this Saturday, June 18 at 6 pm ET with an encore on Father’s Day morning at 8 am ET.

“Cherish called me one day and started asking a bunch of questions,” shares Johnny Lee. ”I didn’t know what she was doing until she played the song. It means a lot, especially coming from my daughter. I love you Cherish.“

“My dad means so much to me,” shares Cherish Lee. “To the world, he is Johnny Lee, but to me- he’s dad. My Papa Bear! He has made a tremendous mark in the entertainment and country music world. But he has made an even bigger imprint on me. This song was my way of honoring him, his life, with the language we speak together…..music. I love you, Papa Bear. Happy Father’s Day!”

Johnny Lee, known for his dynamic stage presence and No. 1 smash crossover hit “Lookin’ for Love,” recently released his highly anticipated new album, Everything’s Gonna’ Be Alright by BFD/Audium Nashville distributed exclusively through Orchard. Everything’s Gonna’ Be Alright consists of fourteen songs, some written or co-written by Johnny, that he has saved throughout the years for the perfect album that truly reflects his life. Each of the fourteen tracks showcases a different side of Lee, allowing his listeners to experience a journey that draws on his past, but more importantly highlights the future. Everything’s Gonna’ Be Alright premiered on Taste of Country and is available on all streaming platforms at orcd.co/JohnnyLeeEverythingsGonnaBeAlright

Johnny Lee was born in Texas City, Texas, and is a member of the Texas Country Music Hall of Fame. In 1968 he began a working relationship with Mickey Gilley at the world-famous Gilley’s nightclub in Pasadena, Texas. In 1979, Lee’s first screen role was in a 1979 TV movie ‘The Girls in the Office’ starring Barbara Eden and Susan St. James. He was then asked to perform in the Urban Cowboy film, starring John Travolta and Debra Winger. “Lookin’ For Love” was included in the movie’s soundtrack, and became Lee’s first gold record. The song spent three weeks at #1 on the Billboard country music chart, and #2 on the pop music chart, later becoming one of their Top 100 Best Country Songs of all Time.