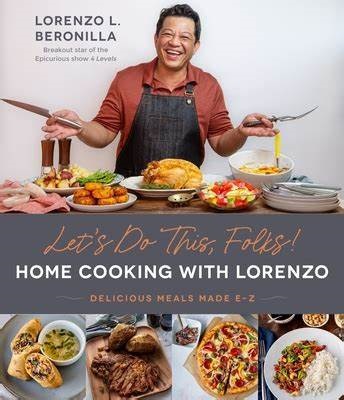 Los Angeles, CA (The Hollywood Times) 05/20/2021- What is the one activity that all humans love to do three times a day and possibly more depending on their dietary habits? You guessed it! They love to eat. If you go onto YouTube and type in cooking shows you will get over 1 million results. These videos range from multimillion dollar cooking shows to a variety of amateur home cooking attempts.

Epicurious 4 Level video series is one of the YouTube sensations that has gone viral. Each episode consists of three different chefs with different skill levels who attempt to make a common, customizable food such as hamburgers and tacos. Then a food scientist discusses the different methods that were used to make up the 4th level. According to Insider.com, Chef Lorenzo Beronilla has been praised for his “dad’ and “uncle” energy, his enthusiasm, and how good his dishes end up looking.

“I started shooting these cooking videos two years ago and we already have over 25 videos posted. I was shocked when the hamburger episode went viral after a few moments. I was not planning on becoming a chef personality but I was ready to enjoy the ride. Being on this show has open doors I never thought possible and I am excited that I get to do the two things I love to do: eat and cook,” said Beronilla.

One door that has opened for Beronilla since this show went viral was the opportunity to create his own cook book to share with his fans.

“I had been getting emails from four different publishing companies which I was hesitate to answer because I thought they were just spam. However, I recognized the name to one of the companies, MacMillan, and did some research. After finding out that they were legitimate, I quickly answered them back. They told me that they were fans of the show and recently read my article in the Business Insider, and would like to see if I would like to write a cookbook that they would publish. They only pick about fourteen to twenty books a year and thought my cook book would be a great investment. This put me on the road that I was not prepared for,” explained Beronilla.

As many writers know, creating a book of any size can be challenging especially when it is your first time. Beronilla had to find his voice and figure out how to put it together.

“When I started to write the book, I had trouble organizing it because I would write it like it was a script. I was very descriptive. The whole process of writing the book, editing it, and fine tuning it was very difficult but when I was done, I told myself never again but was amazed at what I had just accomplished,” expressed Beronilla.

Let’s Do This Folks: Home Cooking with Lorenzo has 60 flavored packed recipes that were inspired by his Filipino/American background.

“Many people find it hard to believe that I am Filipino, therefore I needed to own up to my Filipino heritage. I chose dishes that were Filipino which I Americanized and then created American dishes with a little bit of spice,” explained Beronilla. “My cooking comes from many generations of past down recipes. When I cook certain foods, I can envision my grandmother making them and my older cousin. It’s nice to know that other people are enjoying my families’ recipes. Of course, I added my outgoing personality to keep it lively which I love.”

Besides being a food personality and an author, Beronilla has acted in many national commercials and indie films. The camera loves his energy and what he brings to each character.

“I love acting in indie films because I love to challenge myself and dig deep into the emotional state of each character. I can cry on a heartbeat, which helps me when I act in drama. I love the emotional release that it gives. It’s very therapeutic and I say why not get paid for it,” expressed Beronilla. “I do a lot of commercials because it pays the bills and I play towards my strengths, however I don’t get a lot of satisfaction from them. Commercials focus on your appearance and less on your acting ability so it’s not rewarding enough.”

Beronilla is involved in a couple of big projects which he cannot disclose at this time, however he is very thankful and overwhelmed at where his life is heading. It is a dream come true for him.

“I put my heart and soul into everything that I do. I never thought that I would be a cooking personality or even write a cook book, however I am ready to enjoy this ride and all the avenues that are opening up, said Beronilla.