Beverly Hills, CA (The Hollywood Times) 1/3/20 – The Infamous, problematic, and ultimately legendary Joe McCarthy will be featured this winter on PBS! From humble beginnings and farm life in Grand Chute Wisconsin, to the White House during the Soviet Cold War era, McCarthy remains memorable for the urgency in which he spoke, and the lack of evidence from which many of his critiques derived. The PBS network digs deep to provide an unbiased and extremely transparent visual of an especially tumultuous time in American History.

What caught me as particularly odd and telling is the fact that the senator actually had no real leanings in politics one way or the next, but found himself with exceedingly radical ideas based on fallacies. Professor David Oshinsky elaborates, “[McCarthy] looked like he’d done a ton of research; 205 Communists here, 300 Communists here. There was nothing behind it, but the fact is that, because it became on the front pages again and again and, again, it sort of became really big and important news. And that the point was that McCarthy basically said, “I am this tough, working class Irish Marine. I come from the farmland of Wisconsin. And I want to tell you that I am the type of person to fight the Communists.” He actually at one point referred to Richard Nixon, who was sort of a pretender to the throne, an anti Communist he said, “I like Dick, but compared to me, Dick is quite the rented tuxedo.” In other words, ‘I’m the guy who is going to take the Commies into the street, grab them by the throat, shine a light in their face, and get them the hell out of government.’ And I think what you have is a man who manipulated that fear with a particularly simple and vital message and made himself and what he stood for sort of the center of this movement.” In light of lies and deceit, it is argued that McCarthy began this witch hunt, that is popularly known as McCarthyism, to deviate from his own life’s shortcomings and falling short of re-election in the senate as a result. However, the claims and stories made up by the late senator, were less than authentic, and many of McCarthy’s colleagues and press during this time were not completely sold on the accusations that McCarthy seemed to flimsily voice. 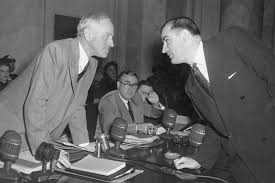 Despite repeated fabrications, media outlets never allowed McCarthy to slip by without pressing for the truth and factual evidence. Following the popular standard of history repeating itself, however, this pressure would not come without its repercussions. Writer and producer Sharon Grimberg explains, “there’s a resonance in the treatment of the press. McCarthy was somebody who lied constantly, vociferously, and did it so often, it was hard to fact check him. The thing that I found interesting in making the film is there were many journalists who did stand up to McCarthy early in his career. It wasn’t just Edward R. Murrow in 1954, but many journalists did. And they got very rough treatment for doing it. James Wexler, who was the New York Post editor, was called up to testify in front of a committee. So he punished journalists who called him out on his lies and his erroneous facts. So that was I think that we’re in a similar sort of situation today.”

The PBS documentary does a beautiful job of illustrating the use of his profound social engineering and how powerful Joseph McCarthy’s voice was, even if the allegations were not backed by factual evidence. The Republican party at the time vouched for this intoxicating paranoia and allowed it to surge across the nation in light of constituents following and believe the late senators words as factual.

It is captivating and simultaneously hard to experience a documentary of a man who harbored so much power and control through smear tactics and heightened fear based sensationalism. As history repeats itself, PBS paints an unbiased, historical picture of the well-known, witch-hunt era that has impacted American culture immensely led by a man who will forever be known as the once ‘Demagogue of the nation’ Be sure to catch McCarthy, January 7th on PBS.