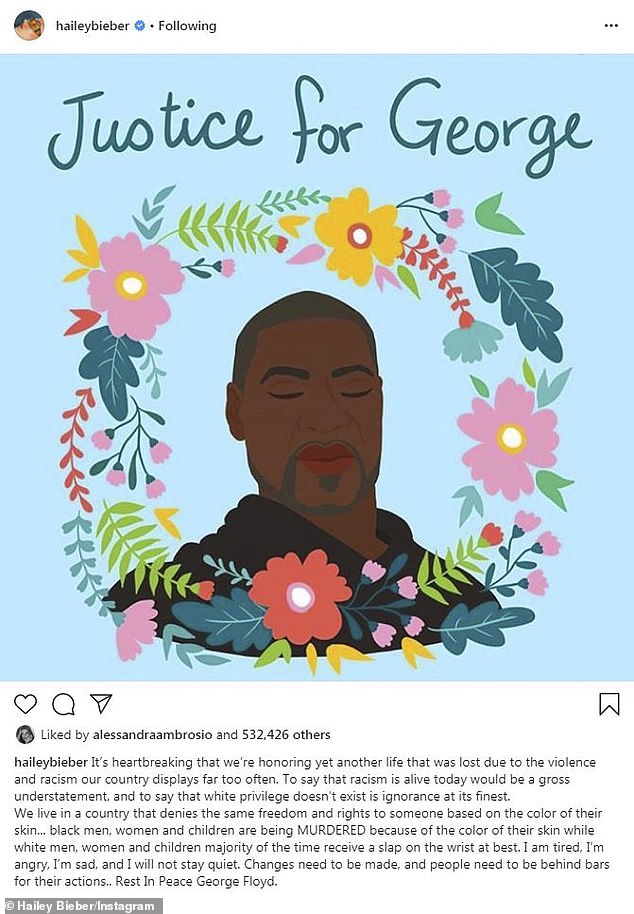 Los Angeles, CA (The Hollywood Times) 6/1/20 – Tear gas, destruction, and chaos flooded the media this weekend and has caused not only a national conversation about the Black Lives Matter Movement, but also has caused celebrities to use their platforms to encourage a long-overdue systematic change.

George Floyd was killed May 25th in Minneapolis, Minnesota. A disturbing video of Floyd’s arrest showed Derek Chauvin, a White policeman, with his knee on Floyd’s neck for more than eight minutes during Floyd’s arrest. Floyd was unresponsive when paramedics arrived and was later pronounced dead. Some people believe that this unjust murder of an African American man at the hands of a White cop was what caused this uproar in Los Angeles. However, this was just the breaking point of years of racial profiling, injustice, and inequality in America.

Advertisement
What originally started as peaceful protests in honor of Floyd’s death spiraled out of control when certain groups behaving like anarchists decided to capitalize on the marches by looting and violently destroying businesses and properties all over LA. Madison Beer and other young celebrities chose to join the march on Sunday in Santa Monica in hopes to be a part of the movement; then it took an unexpected turn.

The 21-year-old singer tweeted, “LEAVE SANTA MONICA NOW IF YOU CAN I WAS JUST TEAR GASSED THEY ARE ARRESTING EVERYONE AND TEAR GASSING ALL CROWDS.”

Beer has been active on Twitter encouraging her 2.8 million followers of the numerous ways they can join the BLM movement from their homes, such as donating and signing petitions. She also has been providing updates about the citywide curfew and the arrival of the National Guard in hopes to keep her followers safe.

A close friend of Beer, Hailey Bieber took to Instagram to share to her 27.4 million followers that a large part of this movement starts with recognizing white privilege. The 23-year-old model sought out Angela Rye, political commentator on CNN and an NPR political analyst, to become more educated on the movement.

Bieber captioned the post, “As a white woman, I know I am privileged, and I didn’t always understand what that really meant. I will never understand what it’s like to be racially profiled and targeted and wake up everyday uncertain if I could lose my life because of the color of my skin. Through this conversation with Angela I really just wanted to learn, to ask questions even if I thought they were the wrong question. I want to know better so I can do better and I will not stop asking these questions and having these conversations. I want to keep learning how to be an ally, and I refuse to keep walking through life being ignorant.”

Her husband, Justin Bieber, has also been active on his social media platforms encouraging others to speak up; silence speaks volumes. Bieber shared a photo to his 137 million followers that stated, “Dear non-black friends…I’m paying attention to your silence…” This message was followed by another photo containing the famous Malcolm X quote: “Freedom for Everybody of Freedom for Nobody.”

Bieber just posted another photo to his Instagram containing a quote from The Washington Post: “George Floyd died of ‘asphyxia due to the neck and back compression,’ his family’s autopsy finds.” Bieber captioned the post, “For all of those people who are still saying ‘Let’s wait to hear all the facts.’ Smh.”

Advertisement
Other young celebrities who have been actively spreading awareness include Selena Gomez, Ariana Grande, Taylor Swift, and Kylie Jenner; these also happen to be some of the most followed accounts on Instagram with a combined follower total of 678 million. This is an example of celebrities using their platform to inspire and motivate the next generation to become more educated, aware, and involved in social justice and politics. After all, what is the purpose of having such a large platform if you cannot use it to make the world a better place?

However, it’s not just the younger generation of celebrities trying to get involved in the movement. Celebrities such as Seth Rogen, Janelle Monae, Steve Carell, Kehlani, and Lil Nas X are donating to the Minnesota Freedom Fund to bail out protestors in Minneapolis. This non-profit organization “pays criminal bail and immigration bonds for those who cannot afford to as we seek to end discriminatory, coercive, and oppressive jailing.”

If you want to get involved in this movement, there are many ways to do so. You can call Gov. Waltz of Minnesota at (651) 201-3400 and requested that there be an independent and fair investigation into Floyd’s case conducted by the Attorney General’s office. There are also many organizations besides the Minnesota Freedom Fund you can donate to such as the Black Visions Collective, Reclaim the Block, Campaign Zero, and Unicorn Riot that fight for racial justice every day. You can also donate directly to the George Floyd Memorial Fund:

Let’s make an effective systematic change, but let’s do it peacefully. Violence is never the answer.