Beverly Hills, CA (The Hollywood Times) 8/8/19 – In the series premiere of Why Women Kill, a CBS All Access series written by Marc Cherry (Desperate Housewives), we’re introduced to a Pasadena, CA home that provides the backdrop for three couples living in three different decades. Ginnifer Goodwin, Lucy Liu, and Kirby Howell-Baptiste each play one half of the couples and deliver stellar performances.

In 1963, Beth Ann’s (Goodwin) life as a caring housewife is turned upside down when she learns of her husband Rob’s (Sam Jaeger) sloppy affair. In 1984, Simone (Liu) and her husband Karl (Jack Davenport) are dealing with the aftermath of his shocking secret. In 2019 or present day, assertive lawyer Taylor (Howell-Baptiste) has an open marriage with her husband Eli (Reid Scott).

“Murder Means Never Having to Say You’re Sorry” and “I’d Like to Kill Ya, But I Just Washed My Hair” are the chosen titles of the first two episodes. The audience has no choice but to expect death at every corner with titles so telling; however, Marc Cherry wants the viewers to be held in suspense for the length of the exclusive CBS series.

“I thought it was a different way of doing a mystery which is there’s going to be and, indeed, there will be three murders… three deaths,” Cherry shared during the CBS Summer 2019 TCA Press Tour at the Beverly Hilton Hotel on August 1st. “I should be more specific,” he continued, “Three deaths at the end of the series, and they will all be committed by women, but it’s not necessarily the three women on this stage.” Cherry was referring to Goodwin, Liu, and Howell-Baptiste.

The series provides an oddly sobering look at how gender roles have been expressed throughout the years. Viewers will have fun finding a character to relate to in the midst of infidelities, exposed secrets, and progressive lifestyles. 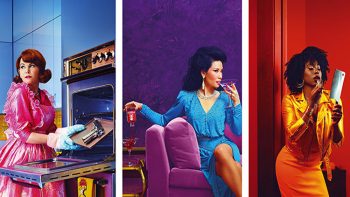