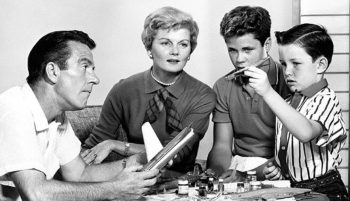 A Brief History of “Leave It to Beaver”
Click here

ON THIS DAY
Classic sitcom “Leave It To Beaver,” with Jerry Mathers as young Theodore Cleaver (aka “the Beaver”), premiered on CBS in 1957. It moved to NBC. In season two (through six), and was revived as made-for TV movie “Still the Beaver” in 1983 and spin-off series “The New Leave It to Beaver” from 1984-89…Also debuting was CBS sitcom “December Bride” in 1954, which spun-off “Pete and Gladys” with Harry Morgan and Cara Williams in 1960; CBS dramatic anthology“Playhouse 90” in 1956; and “Beverly Hills, 90210” from Aaron Spelling on Fox in 1990, which ran for 10 seasons…

Did You Know?
Legend has it that “Leave it to Beaver” was the first series to show a toilet on television, but that is only half true. In the second episode of the sitcom, “Captain Jack,” Beaver and Wally (Tony Dow) need a home for their baby alligator and they choose the toilet tank. We never did actually see the toilet itself.

Note: Nielsen is no longer releasing the overnight ratings in the morning. Please visit our website at approximately 11:15 a.m. ET for the fast affiliate results (which is time period based and is now the first set of data we are using).

A Brief History of “Leave It to Beaver”
Full disclosure: I was not born when classic sitcom “Leave It to Beaver” debuted on this day in 1957. But that does not mean that I, or anyone of any age, should not be familiar with the picture-perfect clan called Cleaver, which exemplified the idealized suburban family we all craved.

Like other family-themed comedies of that time (“The Adventures of Ozzie & Harriet” and “Father Knows Best,” in particular), love and understanding — and a happy ending — was the recipe for any situation. But what set Leave It to Beaver apart was its perspective, where the comedy focused on life through the eyes of Jerry Mathers (as Theodore “Beaver” Cleaver), who was seven years old when the series began.

In a typical episode, “Beaver” gets himself into some kind of trouble (remember that bad haircut, that goofy outfit his aunt wants him to wear, or when he gets stuck in an advertising billboard with an enormous make-believe cup of soup?), then faces his parents — stern but sensible Ward (Hugh Beaumont) and ladylike June (Barbara Billingsley). By episode end, the situation is rectified, Ward offers some sage advice, and good’ ol June, dressed to the nines, is always ready with some warm parental mothering. For more, click here

CBS Orders Competition Series “Tough As Nails”
CBS has greenlit “Tough As Nails,” a new 10-episode competition series that throws the spotlight on real people who are real tough in real life, as a result of their physically demanding everyday jobs. The series comes from “The Amazing Race” host and producer Phil Keoghan, who will also host, and his producing partner, Louise Keoghan.

The logline: “Tough As Nails” is about competitors who consider the calluses on their hands a badge of honor. They will be tested for their strength, endurance, agility and mental toughness in challenges that take place in the real world. One by one, they will be eliminated until the winner is named. The series will redefine what it means to be tough, proving that it comes in all shapes and sizes, and will celebrate Americans who roll up their sleeves 24/7 and don’t think twice about working long hard hours and getting their hands dirty, in order to keep their country running.

“Tough As Nails” comes from Raquel Productions Inc. and Tough House Productions. A premiere date will be announced at a later time. The series will be conducting a nationwide casting search in November. For more information on dates and cities, visit www.toughasnailscbscasting.com.

NBC Eyes Comedy “Forever Family”
NBC has bought a scripted for a proposed sitcom from Matthew Winer (“Modern Family”) called “Forever Family.” Written by Austen Earl and Joel Church-Cooper, with Winer will serve as a non-writing executive producer, the premise involves three different families that live “miles away but worlds apart” and who discover that their adopted children all share the same birth father. Earl and Church-Cooper will executive produce the project, along with Winer and Jon Radler, who heads up development at Small Dog

TBS Orders One-Hour Drama “Obliterated” Straight to Series
TBS has greenlit the action drama “Obliterated” straight to series. From the creators of “Cobra Kai,” and produced by Sony Pictures Television, the 10-episode serialized action dramedy focuses on an elite special forces team who is tracking a deadly terrorist network, hell bent on blowing up Las Vegas. After their raging end-of-mission party filled with alcohol and drug-fueled debauchery, the team discovers that the bomb they deactivated was a decoy. With the clock ticking, the intoxicated team has to fight through their impairments, overcome their personal issues, deactivate the bomb, and save the world.

“Obliterated” will be executive produced and written by Jon Hurwitz, Hayden Schlossberg and Josh Heald. Dina Hillier from the trio’s Counterbalance Entertainment will also serve as a co-executive producer.

Pop TV Renews “Florida Girls” for Season 2
Pop TV has greenlit comedy “Florida Girls” for a second season, with an unconfirmed number of new episodes. Debuting on July 10, “Florida Girls” follows a group of four women, who live in a trailer park in Florida. When one of their friends receives her GED and moves out of state, Shelby (Laura Chinn) becomes unsatisfied with the status quo, and aspires to do the same with her friends.

ON THE AIR TONIGHT
Series premieres: “My Country” and “Raising Dion” on Netflix; “Relentless with Kate Snow” on Oxygen…Season premieres: “The Blacklist” on NBC; “Rotten,” “Super Monsters,” “Big  Mouth”  and “Creeped Out” on  Netflix; “Goliath” on Amazon; “Into the Dark” on Hulu…“WWE Smackdown!” moves to Fox…For the listing of available programs for Friday, October 4 click here