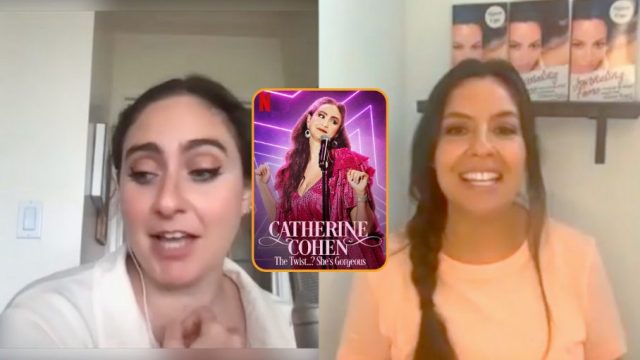 In 2019, Catherine won the coveted title of Best Newcomer at the Edinburgh Fringe Festival. She’s the co-host of the popular podcast Seek Treatment and author of GOD I FEEL MODERN TONIGHT: Poems From A Gal About Town. Catherine is currently filming the hour-long dramady series, While You Were Breeding for Freeform Network.

In this first episode of Season 4 of the Allison Interviews podcast Catherine Cohen reveals to host Allison Kugel exactly how she landed her Netflix comedy special, what it took to get into Princeton, why she’s freezing her eggs at age 30, how she comes up with her material, growing up Catholic but feeling Jewish, being hard on herself, and who she was in a previous life. 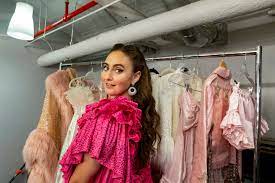 The full podcast episode is available on Apple Podcasts, Spotify; and on YouTube. This interview is also available to publish in its entirety for print, as well as the excerpts below.

On how to land a Netflix comedy special if you’re Catherine Cohen:

“This was a show that I was doing on my own for five years in New York. I did my show for the first time in 2017 at The Duplex [piano bar] in the West Village, along with my music composer Henry Koperski, who plays piano and helped me write all the songs. Then we did it at Joe’s Pub in New York. I wanted to take it to the Edinburgh Fringe Festival, and right before I was going to do that I got a message on Facebook from Steve Brill, who directed my Netflix special.  I thought, ‘Is this spam?’  He said, ‘Hey, I just directed Adam Sandler’s special and I really want to do another one. Is that something you are interested in?’  I thought, ‘Duh!’  But then I thought, ‘This feels too good to be true.’ We ended up meeting for coffee and just totally vibed, and had the same vision, so I said, ‘Let’s totally do it!’ Having Steve Brill on my team really helped a lot. He had a relationship with Netflix, so he helped me make it happen. We had a bunch of meetings with them.”

“Robbie Praw, who works at Netflix, came to see my Edinburgh show. I remember the next day we went for a long walk and we talked about what it could be and what my dreams were, and what would make sense for the platform. Then I got the offer to do the show as a Netflix special in 2019, and we were going to shoot it in 2020… LOL. We finally got to shoot it in September 2021, and it just came out in March 2022. We shot it in Joe’s Pub, which was nice because that was a place where we had done early versions of the show and I felt really comfortable. It was a total dream come true. I’m so happy it is out in the world. It’s been many years in the making.”

On how to get into Princeton University if you’re Catherine Cohen:

“Yes, I did go there. I don’t feel super smart these days, but I guess I did well enough in school to get there. It’s a very bizarre skillset; it almost has no reflection on your intelligence. It’s just like, are you obsessive? Uptight? Really hard on yourself and a fast reader? You just have to memorize a bunch of stuff, be absolutely psychotic and evil towards yourself, and then maybe you can get in (laugh).”

On the decision to freeze her eggs at age thirty:

“I actually just started the process of freezing my eggs. I just started the medications, so I’m feeling, like, not in my body. First of all, I’m not drinking and I’m drinking lots of water, but I can’t exercise. I can only walk, and I’m feeling out of my body, but it’s sort of a beautiful human experience, I guess. You’re getting your ovaries huge, for lack of better scientific terminology, and so there is danger of twisting or damaging them because they are so big. I’d been trying to spend more time at the gym, but now I’m just going on slow strolls.”

“I’m 30, but I have Polycystic Ovarian Syndrome, so my cycle is very irregular. I don’t get regular periods and I have been told it might be difficult in the future to get pregnant. I’m definitely not ready at all, so I figured I have some time this summer. I have some money saved, so why not do it? Then I can just not have it on my mind and enjoy the next five years of my life, and revisit the matter at a later date.”

On being done with the material from her Netflix special, The Twist…? She’s Gorgeous:
“As soon as the [Netflix] special came out, I was done with that material. I’m doing all new stuff. I did some shows in London. I did some shows in Austin and LA, and now I’m just working on new [material]. I’m going back to the UK this summer. I’m going to do some dates at the Edinburgh Festival, and I think I might do an encore performance of The Twist. But emotionally, I’m ready to move on creatively.”

On being raised Catholic but feeling Jewish:

“My mom is Catholic and we were all confirmed Catholic. We went to very religious private schools where everyone was very evangelical, and it was totally damaging and creepy.  Thankfully, I went to college and met a bunch of Jewish people and thought, ‘These are my friends. This is my vibe. I forgot I had this side (Cohen’s father is Jewish).”

“I just hated all the arbitrary rules, the way the Evangelical church teaches woman to be so ashamed of everything; to hide their bodies, their personalities, and be submissive to their partners. It was just so against everything I had ever felt, and everything my parents had taught me. My parents didn’t teach me any of that. At one point I did get really into it, because it was intoxicating. You’re going on ski trips, meeting boys from different schools, so it was like, ‘Church is cool. Church is fun.’ Than you realized you were kind of brainwashed into believing things you didn’t stand for.”

On trying not to be so hard on herself:

“I’m constantly convinced that if I wasn’t successful, I would be inherently unworthy. My boyfriend told me I wasn’t allowed to use the word ‘loser’ anymore.  I would say, ‘They are a loser,’ or ‘I’m a loser.’ He says, ‘What are you even saying?  Don’t use the word loser anymore.’  I’m constantly convinced that I have to be the most successful person in the world, or I’m a loser. It’s a very Princeton mentality. I actually just went to my college reunion last weekend. I was just thinking about how hard on myself I’ve been for so long. It does often yield results, though it’s taking a toll, so I’m trying to figure out how to be productive without losing my mind.”

How her past life impacted this one, and made her decide to be Gorgeous!:

“I actually did past life regression therapy, recently. In my first past life I was an ugly old lady who made bread, and she wasn’t allowed to go to the ball unless she brought a loaf of bread. I would actually go back in time to that first life and say, ‘Girl, you deserve to go to the ball, and you don’t have to bring bread. Just bring yourself.’

About Journalist and Podcast Host Allison Kugel
Allison Kugel is a veteran entertainment journalist with close to four hundred long-form celebrity and newsmaker interviews published and syndicated, worldwide. She is author of the memoir, Journaling Fame: A memoir of a life unhinged and on the record, and host of the podcast, Allison Interviews, where listeners can tune in to hear the full conversations behind Allison’s print interviews. Watch and embed the entire interview video with Catherine Cohen @YouTube. Listen to the audio podcast on Apple Podcasts, Spotify. Follow Allison Kugel on Instagram @theallisonkugel and at AllisonInterviews.com.