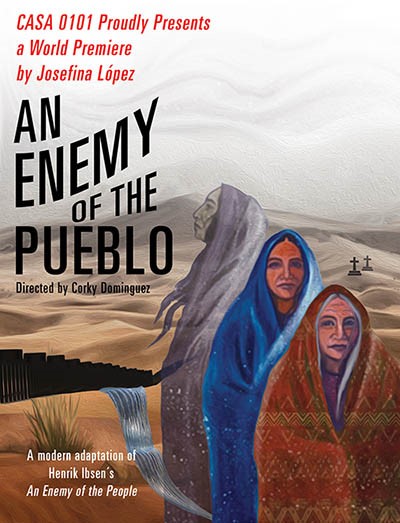 Josefina López said, “In my adaptation of Henrik Ibsen’s An Enemy of the People the main character isn’t the male Dr. Thomas Stockmann, as it is in Henrik Ibsen’s play, or in Arthur Miller’s adaptation … In my adaptation of Ibsen’s play, the central protagonist is a Mexican woman of Apache descent who is a Midwife and Curandera (shaman woman) who discovers the water in the town has been contaminated.  She has a premonition and it is her gut that tells her she is right.  AN ENEMY OF THE PUEBLO is a Chicana eco-feminist approach – where it is not science or logic that is the strength of the character, but her intuitive feminine self.  The play is set in Milagros (Miracles), a colonial town in Mexico near the U.S. border on the brink of becoming a ghost town for healing springs that attracted American tourists for many years until the town was overrun by a drug cartel called “Los Sapos” (The Frogs).  The play is set in the present and deals with immigrant issues.”

Under the direction of Corky Dominguez (or Boyle Heights), Obie Award-winning actress Zilah Mendoza (of Pasadena, appearing courtesy of Actors Equity) leads a cast of 10 actors portraying 20 roles in the central role of Magdalena “Magda” Del Rio, a Mexican woman of Apache descent, a Curandera (shaman woman), Midwife and co-owner of the land where the springs are located.

Other member of the cast include:  Arturo Aranda, Jr. (of Los Angeles) as Pedro Del Rio, Magdalena’s younger brother, Mayor of the town and co-owner with Magda of the land where the springs are located; Laura Bravatti (of Hacienda Heights) as Petra Del Rio, Magda’s daughter; Angiee Lombana (of Pomona) as Clarita Del Rio, Petra’s daughter and Magda’s granddaughter, and as Laura, a lady who gives birth with the assistance of Magda; William Jaramillo (of Long Beach) as O’Connor, a “gringo” Mexican of Irish decent; J.D. Mata (of North Hollywood) as Luis, a journalist who is also a founder of the town’s newspaper, and as Man of the Pueblo, an ignorant man, and as Musician; Joshua Nuñez (of Rancho Cucamonga) as Laura’s Husband, and as

Juan José, a journalist; Paul Renteria (of East Los Angeles) as Ghost of El Sapo, the head of the drug cartel, and as Señor Reyes, one of the heads of a company in charge of renovating the springs; Javier Ronceros (of North Hollywood, appearing courtesy of SAG/AFTRA) as Eugenio/Ghost of Eugenio, a courageous and proud man, and as Padre Lazaro, the town priest who drinks too much and gossips about people when he is drunk; and Catalina Shoshan (of Encino) as Elvia, a lady who goes to Magda for psychic help, and as Doña Campeche, a mother in the town of Milagros, and as Woman of the Pueblo, an ignorant woman.

Director Corky Dominguez says, “Josefina López has written a very special piece of theatre. I am honored to be directing this particular piece of a women’s heartfelt struggle to get the truth out in the open. I’m working on creating an intimate piece of theatre experience for audiences with both Josefina’s text and what I perceive to be her and my vision for this intense story.”

Josefina López (Playwright, AN ENEMY OF THE PUEBLO; Founding Artistic Director, CASA 0101 Theater, Producer, Screenwriter, Author, Restaurateur, Activist) is best known for authoring the play and co-authoring the film Real Women Have Curves, a coming-of-age story about Ana, a first-generation Chicana torn between pursuing her college ambitions, a personal goal and securing employment, which is a family expectation.  Along the way, Ana confronts a host of cultural assumptions about beauty, marriage and a woman’s role in society.  Although Real Women Have Curves is López’s most recognized work it is only one of many literary and artistic works she has created since her artistic career began at 17.  Born in San Luis Potosí, Mexico to Catalina and Rosendo López, on March 19, 1969, Josefina López was five-years-old when she and her family immigrated to the United States and settled in the East Los Angeles neighborhood of Boyle Heights.  She graduated in the first class from the Los Angeles County High School for the Arts in 1987.  López was undocumented for 13 years before she received Amnesty in 1987 and eventually became a U.S. Citizen in 1995.

López has been an activist and has been doing public speaking for over 20 years.  She has lectured on various topics including Chicano Theater, Women’s History Issues and Minority representation in Cinema at over 200 universities such as Yale, Darmouth, and University of Southern California.  She has been the subject of countless television and radio interviews in which she has passionately discussed immigration issues and other controversial subjects concerning women and minorities.

López is the recipient of a number of other awards and accolades, including a formal recognition from U.S. Senator Barbara Boxer’s 7th Annual “Women Making History” banquet in 1998; and a screenwriting fellowship from the California Arts Council in 2001.  She and Real Women Have Curves film co-author George LaVoo won the Humanitas Prize for Screenwriting in 2002, The Gabriel Garcia Marquez Award from Los Angeles Mayor James K. Hahn in 2003, the Artist-in-Residency grant from the National Endowment for the Arts/Theatre Communications Group for 2007 and a grant from The California Endowment in 2013.

Tickets during the four-week run are $20 per person for General Admission; $17 per person for Students and Seniors; and $15 per person for Boyle Heights residents.  Discounts for Groups of 10 or more will be available at $15 per person.  This show is recommended for all audiences.  Advance reservations are highly recommended.  Free Parking is available on several streets surrounding the theatre.  Free Parking is also available on Fridays and Saturdays only at the Boyle Heights City Hall Parking Lot located at 2130 East First Street (at Chicago Street) by entering the lot from Chicago Street; the lot is closed on Sundays.  For tickets, please call the CASA 0101 Theater Box Office at 323-263-7684, E-mail tickets@casa0101.org, or buy online at www.casa0101.org.  Join the conversation on Facebook @CASA0101Theater; on Twitter @CASA0101 and on YouTUBE at https://www.youtube.com/user/casa0101theater.

This production is made possible thanks to a generous grant from the Department of Cultural Affairs, City of Los Angeles.