Los Angeles, CA (The Hollywood Times) 4/14/22 – This year the Cannes Film Festival is returning to its more traditional May 17 – 28 dates after being moved to July in 2021 due to the COVID pandemic. 47 titles have been unveiled as of today and more will be announced in the coming days. Michel Hazanavicius’ zombie comedy Z will open the festival out of competition. It was supposed to premiere at Sundance but the sales agent Wild Bunch International pulled the film at the last minute. Hazanavicius is, of course, known for his 2011 black and white silent film, The Artist, which won the Academy Award for Best Picture at the 84th Academy Awards and won him the Oscar for Best Director too. His latest is a French remake of the 2017 Japanese film One Cut of the Dead and is a meta horror-comedy and meta film about a small film crew shooting a low-budget zombie movie. Things go bad when they are attacked by real zombies. The cast stars Romain Duris, Bérénice Bejo, Grégory Gadebois, Finnegan Oldfield, Jean-Pascal Zadi, Matilda Lutz, Sébastien Chassagne, Raphaël Quenard, Lyes Salem, and Simone Hazanavicius.

Triangle of Sadness is an upcoming Swedish film written and directed by Ruben Östlund and starring Harris Dickinson, Charlbi Dean and Woody Harrelson. This dark comedy centers on a fashion model celebrity couple (Dickinson and Dean) who are invited on a luxury cruise for the super-rich. The yacht – whose captain is a rabid Marxist (Harrelson) – sinks, leaving the duo stranded on a desert island with a group of billionaire jet setters and a cleaning lady, with the ensuing fight for survival turning the pre-existing hierarchy upside down and changing the dynamics of the group: The cleaning lady rises to the top of the food chain as she is the only one who knows how to cook. This is a “wild” satire set against the world of fashion and the uber-rich, with “appearance as capital” and “beauty as currency” as the underlying themes. Östlund’s film The Square (2017) won the Palme d’Or at the 70th Cannes Film Festival. 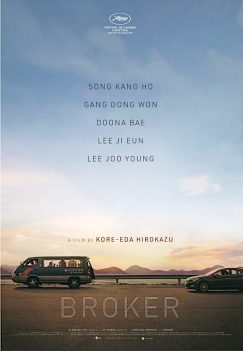 Broker is an upcoming South Korean drama film directed by Hirokazu Kore-eda starring Song Kang-ho, Bae Doona, Gang Dong-won and Lee Ji-eun. The film revolves around characters associated with baby boxes, which allow infants to be dropped off anonymously to be cared for by others. Sang-Hyun (Song Kang-Ho) finds new parents for a baby left in a baby box and makes a special deal with them. He calls himself a broker of good will. Sang-Hyun works with Dong-Soo (Gang Dong-Won) in this endeavor. They get involved with So-Young, who placed her baby in the baby box, but has now come back for her baby. Meanwhile, Detective Soo-Jin (Bae Doo-Na) and Detective Lee (Lee Yoo-Young) chase after Sang-Hyun and Dong-Soo.

The Stars at Noon is the latest by French director Claire Denis, a romantic thriller based on the 1986 novel of the same name by Denis Johnson. The novel follows an unnamed American woman during the Nicaraguan Revolution of 1984. The story centers around an unnamed American woman played by Margaret Qualley, supposedly a journalist, living in Managua, Nicaragua in 1984, during Sandinista rule. She originally traveled to Nicaragua as an observer for an anti-war group. She is disgusted with the corruption of both the Sandinistas and “the stupid CIA.” She hustles as a prostitute at the Inter-Continental Hotel in Managua, hoping to leave Nicaragua one day. At the hotel, she eventually meets an unnamed English oil businessman whom she falls in love with. When the Englishman has a falling out with Costa Ricans, the two flee together toward the border. An American who is most likely a CIA agent tracks them and pressures her to sell out the Englishman.  Joe Alwyn plays the mysterious British oil company employee masquerading as an NGO. Originally, Robert Pattison was set to star in Alwyn’s role.

Polish filmmaker Jerzy Skolimowksi’s latest film Eo is a contemporary interpretation of the cult classic Balthazar, at random by Robert Bresson (1966). The masterfully written screenplay (Ewa Piaskowska and Jerzy Skolimowski) is distinguished by its original cinematic framework and allegorical approach to the subject. The story of a donkey named Baltazar, beginning in a Polish circus and ending in an Italian slaughterhouse, is a bitter but also warmly humanist paraphrase of a “road movie.” It is a panopticon of human behavior towards a defenseless animal, a suggestive picture of social relations and cultural changes taking place in the modern world.

Kirill Serebrennikov, the iconoclastic Russian filmmaker behind Cannes competition titles Petrov’s Flu and Leto, will be offering his latest film Tchaikovsky’s Wife. Serebrennikov, who was under a three-year travel ban from Putin’s government and since resettled in Germany, sheds light on the tumultuous relationship between Pyotr Tchaikovsky, the most famous Russian composer of all time, and his wife Antonina Miliukova in his new film. Set in 19th century Russia, the movie portrays Miliukova, a beautiful and bright young woman who became obsessed with Tchaikovsky after listening to his music for the first time. The composer will finally accept their union but once married, he will be blaming her for his misfortunes and breakdowns, and will try to get rid of her in every possible way. Miliukova, meanwhile, decides to endure and to do whatever it takes not to divorce him. Humiliated, disgraced and discarded, she slowly slips into madness.

Holy Spider is Ali Abbasi’s latest film of this Iranian director, after his Cannes-winning Swedish-Danish feature film Border. Holy Spider is based on notorious and controversial events from the years 2000-2001 in Iran. A journalist descends into the dark underbelly of the Iranian holy city of Mashhad as she investigates the serial killings of sex workers by the so-called Spider Killer, who believes he is cleansing the streets of sinners. The film, exclusively in Persian, stars Mehdi Bajestani, Zar Amir Ebrahimi, Arash Ashtiani, Forouzan Jamshidnejad, Alice Rahimi, Sara Fazilat and Sina Parvaneh.

Arnaud Desplechin’s 12th feature film Brother and Sister (Frere et soeur) stars Marion Cotillard (who previously toplined Ismaël’s Ghosts and Melvil Poupaud (who was in A Christmas Tale).  The story revolves around a brother and sister who are nearing their fifties. Alice is an actress. Louis was a teacher and a poet. They no longer speak to one another and have been avoiding each other for over twenty years, but the death of their parents will force them to cross paths.

Over the decades, Belgian filmmakers Jean-Pierre and Luc Dardenne (aka The Dardenne Brothers) have produced some of the most interesting films to come out of Europe. They have collected trophies from all over the world at various festivals, including two Palme d’Or awards from Cannes, and are always surprising film fans with each and every project. And the Dardennes are back at it, with a new film, titled Tori et Lokita (Belgium/France, 2022). Tori et Lokita will look back on the friendship uniting two youngsters who have travelled alone from Africa and find themselves contending with the cruel conditions of their exile in Belgium.

Much anticipated is Tarik Saleh’s Boy from Heaven, a political thriller that unfolds in a prestigious religious university in Cairo. On the first day back after the summer holidays, the grand imam collapses and dies in front of his students. This marks the start of a ruthless battle for influence to take his place. Adam, the son of a fisherman, had been offered the ultimate privilege to study at the Al-Azhar University in Cairo, the epicenter of power of Sunni Islam. Shortly after his arrival in Cairo, the Grand Imam suddenly dies and Adam soon becomes a pawn in a ruthless power struggle between Egypt’s religious and political elite. Boy from Heaven has Swedish Atmo Rights as main producer and is supported via the Danish Film Institute’s scheme for minor co-productions with Monica Hellström and Signe Byrge Sørensen who were behind this year’s Danish Oscar success Flee.

Godland is a feature film from Iceland by Hlynur Palmason. With Godland, Hlynur again explores family bonds, and the acceptance of myth and spirit. Icelandic-born Hlynur Pálmason’s third feature film takes us to the late 19th century, where a young Danish priest travels to a remote part of Iceland to build a church and photograph its people. But the deeper he goes into the unforgiving landscape, the more he strays from his purpose, the mission and morality. It’s about humanity and nature, and how these things collide, through man, animal, and the world around us. Furthermore, it combines perfectly the Danish and Icelandic side of Hlynur and plays with the cultural differences and miscommunications.