Los Angeles, CA (The Hollywood Times) 7/21/21 – The 74th Cannes Film Festival came to a close this evening of July 17, 2021. This year’s film festival was postponed two months and was a happy return after last year’s cancellation. There were 24 feature films in Competition and the jury, presided by Spike Lee, presented the awards at the Closing Ceremony. During the Closing Ceremony, Italian director Marco Bellochio received an Honorary Palme d’Or for his extraordinary filmmaking career. Jodie Foster was also awarded an Honorary Palme d’Or for her amazing career during the Opening Ceremony. 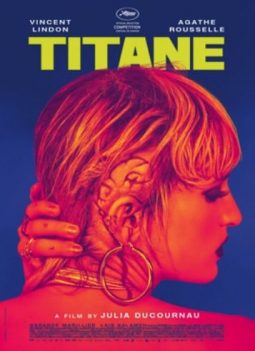 The winner of the Palme d’Or 2021 becomes the second female director to win the prize. Only four female directors, out of the 24 films, were selected for Competition this year. The Palme d’or, presented by Sharon Stone, was awarded to Titane directed by Julia Ducournau. In winning, Ducournau makes history for being the second woman to win the Palme d’Or in 74 years. Jane Campion won the coveted prize in 1993 for The Piano, jointly with Chen Kaige for Farewell, My Concubine. The two lead actors, Vincent Lindon and Agathe Rousselle, joined Ducournau on stage as she accepted the prize. The film made quite the sensation when it screened, praised by some, while heavily criticized by others who described it as “monstrous” as Ducournau pointed out.

Titane is Ducournau’s second feature film, after her body horror debut feature Raw. Titane was deemed by critics as one of the most shocking and violent films selected in Competition this year, and has been compared by many to David Cronenberg’s Crash. In her acceptance speech, Ducournau called for more diversity and inclusivity. The Freudian nexus of fast cars and sex is woven into a violent tale focused on Alexia (Agathe Rousselle), a terse and severe thirtysomething car model in a gender-fluid take on the murderous vulnerability Scarlett Johansson brought to Under the Skin. Although she poses with hot cars to entice male fans, there is something uncanny about the titanium plates beneath her blonde tresses. She prefers the company of a very special vehicle that calls to her from the darkness. Alexia soon shifts into a killing spree and to avoid the police, shaves her head, tapes down her breasts, and assumes the identity of a long-missing little boy named Adrien Legrand. This is the young man with a bruised face who is picked up by airport customs officers. He claims to be Adriane Legrand, who disappeared as a child ten years ago. For Adriene’s father Vincent (Vincent Lindon), a long nightmare has finally come to its end, and he takes the young man home. A violent bonding dance between the two is sound-tracked to The Zombies classic “She’s Not There.” Titane will be distributed in the USA by Neon Films.

The Grand Prix was awarded to two films this year: Asghar Farhadi’s A Hero and Juho Kuosmanen’s Compartment n°6. A Hero tells the story of Rahim, imprisoned because unable to repay a debt. Amazon Studios has acquired the U.S. rights to the Iranian film. Compartment n°6 is an adaptation of the novel written by Finnish author Rosa Liksom. Kuosmanen won the Un Certain Regard Prize for his debut feature, The Happiest Day In the Life of Olli Maki, in 2016.

The Un Certain Regard Prize was awarded to Kira Kovalenko’s Razzhimaya Kulaki (Unclenching the Fists), a Russian drama with an “explosion of originality, physicality and feeling” according to Andrea Arnold. The film was picked up for distribution in North America, the U.K., Ireland, India and Latin America by MUBI.

Sebastian Meise’s Grosse Freiheit (Great Freedom), starring Franz Rogowski and Georg Friedrich, was awarded the Jury Prize. The Austrian film, about a man who keeps on being imprisoned for being a homosexual, set in postwar Germany, was also bought by MUBI for release in North America, the U.K., Ireland, India, Turkey and Latin America.

The Icelandic film Lamb, directed by Valdimar Jóhannsson, starring Noomi Rapace, was given the Prize of Originality. The U.S. rights to the film were bought by A24, and will be released by MUBI in the U.K., Ireland, India, Brazil, and other territories.

The Camera d’Or, for the best first feature film presented at Cannes, was awarded to Murina, directed by Antoneta Alamat Kusijanović.