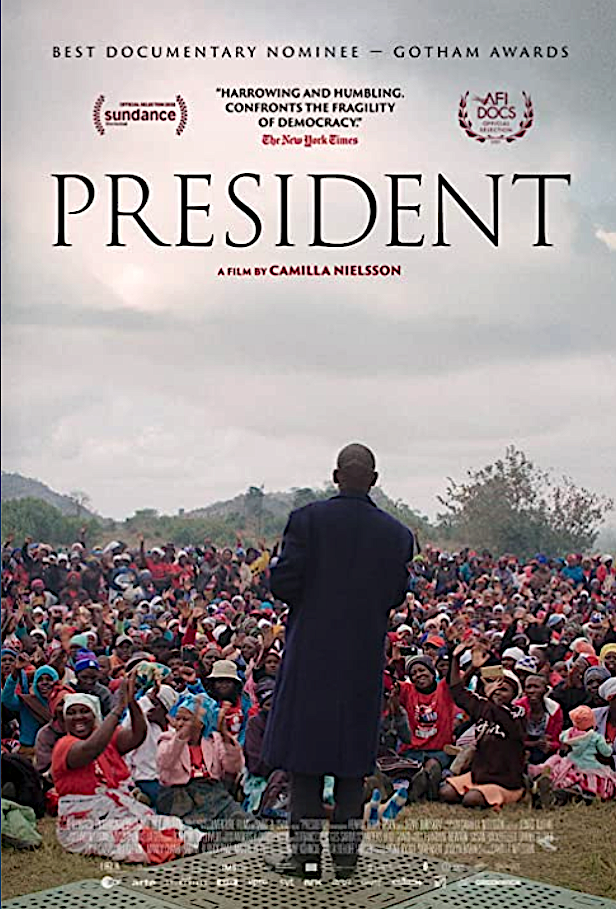 Los Angeles, CA (The Hollywood Times) 1/22/22 – Screening virtually with the Scandinavian Film Festival Los Angeles online, Camilla Nielsson’s documentary President (Denmark/Norway, 2021) retells the controversial presidential electoral battle in Zimbabwe in June 2018 that failed to ensure the change that many Zimbabweans desired. Fairness has been long delayed and denied in Zimbabwe. Following a military-backed coup of the country’s president-dictator Robert Mugabe after a 38-year reign, his former Vice President and successor President Emmerson Mnangagwa ran for reelection in 2018 against an upstart challenger, the young MDC (Movement for Democratic Change) leader Nelson Chamisa.

Director Nielsson immersed herself in Chamisa’s camp, four weeks prior to the contest, to juxtapose Chamisa’s passionate campaign from his larger, richer rivals. For decades under President Mugabe, the country held rigged election after rigged election. Now, the younger generation, which includes the 40-year-old Chamisa, believes this is their opportunity to reshape the nation. In fact, the candidate made several references to “the Obama effect” to describe how they should campaign. And when one sees his fervent rallies, where he plays the raucous rally with a maestro’s precision, the comparison seems apt. But problems abound: The MDC held significantly less money than President Zanu’s PF party, as evident by Mnangagwa’s building-sized pristine billboards. The ruling party also controls the police and military. They use the food aid provided by the UN as means to buy people’s votes. Most of all, they command those tasked with overseeing the contest – the Zimbabwe Election Commission.

When the enrapturing images of the inspired multitudes jubilantly supporting Chamisa fade into election night, these factors collide for a damning combustion. Ballot stuffing. Voter data manipulation. Fabrication of polling stations. The police deployed in riot gear dispensing live ammunition. The eviction of journalists from press conferences. These are the levers of unprincipled power employed by Mnangagwa. Chamisa, his deputies, and supporters – ignoring death threats and the real chance of violent political retribution – fight to the country’s Supreme Court to prove the justness of their cause, only to see justice denied. Measured and methodical, Nielsson’s President is a devastating, heartened report of democracy in peril against a dictator, a report that suddenly feels all-too familiar to Americans.

Punctuating the rousing scenes of Chamisa’s campaign trail – he draws support from both urban and rural voters – is the gritty behind-the-scenes grind at the opposition party’s headquarters. At times, the documentary plays like a political thriller as Chamisa staffers frantically gather intel on the outcome of what increasingly looks like a rigged election in favor of Mnangagwa. The tense atmosphere of these office corridors is juxtaposed with the protests on the streets, where pressure has boiled over into physical altercations between Chamisa voters and the police, who fire live bullets at the dissenting crowd, killing six.

International observers are admitted to the country to observe whether the election will be conducted in a “free, fair, and credible” manner. Although results seemed clear on election night, since Chamisa was the favorite in polling, ZEC delayed announcement of election results until five days later, citing that interval as prescribed by law. When ZEC announces the vote count, there are clear irregularities – for example, an impossible 260,000 persons are recorded as having voted within an hour in one province. Protests arise, broken up by police. A press conference by Chamisa is canceled and then allowed.

Chamisa’s next move is to contest the election count before the Constitutional Court, whose members had been selected some time ago by the autocratic regime. High-powered attorneys from South Africa arrive in the country to assist Chamisa, but they are denied entry into the Constitutional Court chamber to make arguments on behalf of Chamisa. Both sides present their cases, but Chamisa’s petition is rejected. What happened next is left in doubt because the documentary abruptly ends with Chamisa insisting that he will never give up

As Mnangagwa is sworn into office, both Chamisa’s efforts to challenge the result in court as well as his supporters’ guerrilla demonstrations prove futile. Still, this is far from a defeatist film: what President does well is show that a linear narrative is not necessarily the point in the fight for democracy. Victory might not be immediate, but the people’s hope for change will never die. Chamisa has not retained control of his party, and the Constitutional Court even ruled that someone else is the party’s head. And his party is planning to put yet another candidate forward in the next election. Undeterred, Chamisa plans to run again anyway. Although he was shot at in a recent attack in November 2021, he is still active politically.