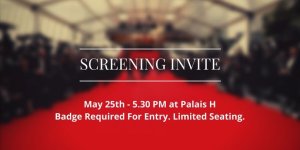 Debuts “Real Artists” at Cannes Marché du Film—by Dr. Laura Wilhelm, LauraWil Intercultural
West Hollywood, CA (The Hollywood Times) 6/1/17 – Cameo Wood’s first narrative film “Real Artists” starring Tiffany Hines and Tamlyn Tomita recently made its debut to Cannes’ audiences as part of the 2017 Marché du Film.  Based on Ken Liu’s short story of the same title, “Real Artists” is a dark tale set in the near future focused upon the question of ethics in neuromarketing and the quantification of value.

“A real artist will do whatever it takes to realize a great vision,” the Hines character says at the job interview that opens the film.  But will she?  For at this fictional company, films are no longer made by individual artists, but by artificial intelligence programs.

“We are also telling a story of a young woman’s dream, and how she might hold the key to the future of storytelling,” claims Wood.

Cameo Wood has a long and impressive career in technology, artificial intelligence, and neuroscience with years of study at Bennington, Bard, Duke, Stanford, and the Neurosciences Institute in La Jolla, CA.  During a telephone interview conducted with this reporter on the morning of Thursday, June 1st, 2017 she observed how AI becomes “invisible” in day to day life throughout numerous technically-based transactions.