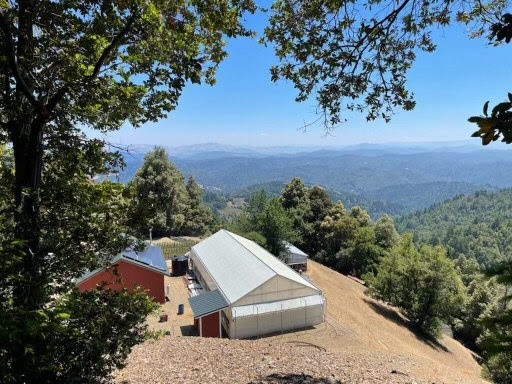 “It’s huge for me to be a Black farmer in the cannabis industry.… It’s huge for the company to have its footprint, and to be a shareholder, and have stock in the southern California market.”

Grant, the 30-year Cannabis pioneer who was instrumental in the writing and passing of Los Angeles’ cannabis regulation ordinance Measure M along with Los Angeles’ social equity program, explains the significance of operating his own cannabis farm. “I’ve purchased this land to extend California Cannabis’ bandwidth, to be a sustainable brand within the cannabis market,” Grant says. “It’s huge for me to be a Black farmer in the cannabis industry. Now, California Cannabis owns a farm, an indoor farm, outdoor farm, and outdoor greenhouse. It’s huge for the company to have its footprint, and to be a shareholder, and have stock in the southern California market.”

Grant has a long history of purchasing cannabis in Northern and Southern Humboldt county. “Southern Humboldt is a place that I’ve been for quite some time,” he says. “Whitethorn is in Southern Humboldt. Southern Humboldt has always had a special place in my heart from traveling back and forth from Southern California to Humboldt for nearly 30 years. So, it was befitting for me to buy some property and cultivate in a place where I’ve purchased product for decades.”

Additionally, Humboldt county was an appealing location for California Cannabis Farms because it is widely considered one of the best places in the world to cultivate cannabis. “We all know that the best outdoor greenhouse cannabis is grown in Southern Humboldt,” he says. “The topography itself. Just how it sits right off the coast. The fact that it is at a high elevation. The soil is rich. There are so many factors that make that region the best place for cannabis in the world, and the history supports that.”

This acquisition brings things full circle for Grant who owned land in the area in the 2000s but lost it when he was imprisoned in 2007 after his licensed and legally operated cannabis retail shops were raided by the FBI. “I had land in Humboldt before,” he says. “I had 133 acres that was basically stolen from me, so to speak, and that happened back in 2007-2008. Now, I’m acquiring land back in this same area, and almost the same acreage.”

The California Cannabis expansion is inspiring to other cannabis business owners, says New Jersey Social Equity Advocate Muhammed Akil. “Virgil Grant’s new 120 acre cannabis farm further demonstrates people of color can have a substantive presence in the cannabis market,” Akil says. “As a pioneer in the cannabis legalization movement, he has become the people’s champion, not only in California but also on the east coast. Many New Jersey residents are inspired by his life experience and policy insight and are grateful for the significant guidance he provided for our social equity legislation.”

Akil adds, “We are looking forward to bringing the California Cannabis brand to the east coast because his unjust incarceration, his perseverance and vision is the embodiment of social equity.”

Considering the success of Grant’s three California Cannabis locations and its plans to expand, Grant anticipates that his harvest will solely supply his dispensaries. “California Cannabis will be such a big brand, I think we may only have to focus on ourselves and that brand only,” he says. “We’re going to be opening up retail shops throughout the United States, so we probably won’t even be able to produce enough cannabis to supply even the brand once we begin to expand. I see this as an opportunity to take the brand to the next level and expand the brand throughout the United States and eventually throughout the world.”

California Cannabis is already preparing to harvest this fall and is building more than a half a dozen more greenhouses on the property.

The Los Angeles Times designates Virgil Grant as “the de facto leader of the cannabis industry.” MG Magazine hails him as “the King of Los Angeles.”

For more than two decades, Mr. Grant has been a pioneer of the legal cannabis industry as a medical cannabis dispensary owner, cultivator, manufacturer, and civic advocate.

Virgil Grant’s advocacy work spearheaded the City of Los Angeles’ regulatory efforts as a key author, initiative leader, funder, and chief fundraiser ushering the passage of Measure M, which sets new precedents for the city with responsible guidelines, regulations and licensing. Additional civic municipalities throughout the state and nation have turned to Mr. Grant for providing guidance in drafting their ordinance and regulations with his wide-ranging expert insight, experience and knowledge of the industry. He has also been entrusted in this role, influencing the ordinance work on behalf of the State of New Jersey at the legislative level with NJ Senators Scatori and Rice, plus Assemblymember Holley.

With his multifaceted cannabis business experience, Mr. Grant specializes in establishing commercial sites in all cannabis market sectors from construction, licensing and permits to grand opening from the state of California to other states in the U.S. An expert cultivator, Virgil Grant has built a premium brand called California Cannabis West Coast as the finest cannabis product which he proudly boasts to as “Only the best grows in the West.” Mr. Grant’s grand scheme is for his product brand to become the “McDonald’s of Cannabis.”

Grant was honored by the California State Assembly with the prestigious Community Pioneer Award at the 2017 California Democratic State Convention for his work in the cannabis industry on veterans and social equity issues, and is also regularly featured as an cannabis industry expert in media outlets such as the Los Angeles Times, VICE, Forbes, London’s The Guardian, BuzzFeed, Marijuana Business Daily, LA Weekly, LA Daily News, and others.