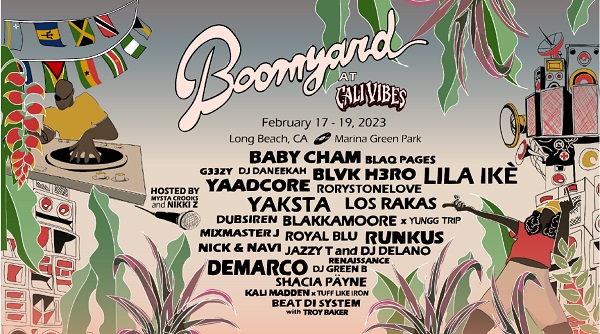 The festival will take place in Long Beach, California at Marina Green Park on February 17-19 2023. BoomYard at Cali Vibes has emerged as one of the only festival activations to incorporate the discovery of some of the Caribbean’s hottest new artists at a North American music festival. The BoomYard stage show will be a spin off of LA’s outdoor, Caribbean day-party providing guests with the cultural experience of Jamaica’s iconic dancehall settings.

BoomYard is one of LA’s most authentic Caribbean events. The outdoor day party, hosted at Delicious Pizza, is a monthly, brunch-style, street-dance and sound-system experience. It has become a genuine celebration of Jamaican culture reminiscent of the island’s cherished carnival raves, street dances, stage shows and dancehall sessions.

“Presenting the BoomYard stage in February is such a unique and celebratory opportunity with Southern California music fans. It’s happening during a culmination of Black History and Reggae Month, which is a noteworthy experience for anyone who is tuned in or interested in the culture. The three-day experience gives fans a chance to see authentic Caribbean talent, dancers and selectors from the diaspora, which makes it feel like we are right there in the islands, where it all began. It’s an honor to create history in Long Beach in our second year.” – Delicious Vinyl Island

Cali Vibes is a premiere reggae and California lifestyle festival that celebrates the connection of its community through good vibes, great atmosphere, and an incredible lineup. It’s taking place Friday, February 17 through Sunday, February

BoomYard is an outdoor reggae-dancehall party powered by Delicious Vinyl Island as part of their ecosystem of music, events and food alongside Delicious Vinyl and Delicious Pizza. BoomYard began in December 2015 as the brainchild of Leslie Cooney (Delicious Vinyl) to bring together LA’s intimate reggae-dancehall community, while paying homage to Jamaica’s iconic street-dance, sound-system culture. Headlined by Jamaica’s most loved artists and selectors such as Shaggy, Mr. Vegas, DJ Delano of Renaissance Sound, and more, the event quickly became one of the city’s most authentic expressions of Jamaican culture. Originally a monthly event, BoomYard has begun to curate traveling stages within and around the global reggae community.