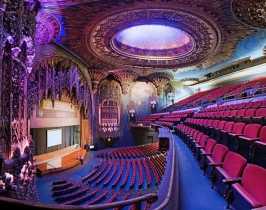 By Elizabeth Carbe and Jean-Pierre Durand

Los Angeles, California (The Hollywood Times) 4/29/2019 – The rare LA appearance of this quartet brings the heart of Brazil to
Downtown LA.

The Theatre at The Ace Hotel was the perfect venue to present
“Ofertorio”, a concert by Caetano Veloso and his sons: Moreno, Zeca and Tom Veloso.

Caetano took the stage and took the audience whose enthusiasm reached beyond the passion for his music. This man clearly represents much more than the aesthetics of his voice, guitar and song. He is the voice of the people of Brazil and they were there to support him.  in turn, be supported by his message and his song.  This concert not only featured Caetano, but his three sons as well.  Although Caetano has performed with two of his sons in the past, late 2017 marked the first time all three have joined him onstage for full concerts.

Each son brought his unique voice, style and personality to the stage, augmenting Caetano’s well-established artistry – they were
rapturously received. The evening began with some of Caetano’s
best-known songs: after his sentimental “Baby”, “O Seu Amor” was rendered in beautiful four-part harmony, achieving that unique resonance that can often only be realized by familial voices singing together.

Caetano took the opportunity to feature each one of his sons throughout the evening, shining a spotlight on their individual talents. Like any loving father, he also wanted the audience to understand a little about each son’s personality.  With a little good-humored prodding and bantering between them, we got a glimpse into the inner working of the family.

The quartet sat in a single line across the stage. Zeca, the youngest, sat stage right playing bass and piano, then Caetano playing guitar followed by Tom on guitar and percussion and finally Moreno on guitar and bass. The whole family sang lead and background throughout the evening, moving in mesmerizing musical chairs backing their father and occasionally taking over lead vocals.

As Caetano moved through various periods of his career, the familiar songs were immediately met with warm cheers and breakout sing-alongs. The sons accompanied their father on various instruments and joined in unison and harmony vocals in both Portuguese and English. Caetano spoke freely and often with the audience as if we were all old friends – I had a feeling many members either were or felt like they were just that. He reflected upon his storied songs and rich and politically charged life. He spoke about the boy’s mothers and gave us a little history about each son and their individual musical journeys as well as their spiritual proclivities. After a few songs, Caetano started to more openly engage his sons in discourse and encouraged them to speak about themselves and the songs they were about to sing.

Zeca was featured on piano singing his composition “Todo Homen”.  His haunting falsetto voice along with the memorable soft melody enchanted the audience. Tom, although reluctant to sing, shared a lovely song that he wrote, accompanied by the rest of the quartet. If he didn’t enjoy singing, as he stated before he began, once he started no one would have known. Tom was also the first to get up and perform a typical Brazilian dance while the rest of the family accompanied him, and the excitement in the audience exploded.  Moreno, who seemed to share his father’s big personality, sang one of his father’s songs, “Um Passo À Frente”; Caetano eventually joined in with on the last verse. Although each musician had a uniquely identifiable voice, it was the unification of those voices that made a diverse yet cohesive evening of beautiful and thought-provoking music.

Towards the end of the evening, more people were yelling songs that they wanted to hear, but no matter which song he chose to sing, it was meet with a noticeable cheer or sigh of contentment. Then several audience members started to make more political comments, referencing the current Brazilian government and the imprisonment of the former and very popular Brazilian president Lula. Caetano made a brief statement “saying that he did want to reference the one year mark of Lula’s imprisonment”. The simple acknowledgment of this as well as recent political events was a unifying thread that further electrified the audience.

The encore brought Moreno and Caetano to the front of the stage for a lively dance. By the end, the smooth lively groove of “A Luz deTieta” brought the crowd to its feet, rushing the stage while dancing, singing and drinking in a truly moving moment.
Before the show, while I was waiting to go to my seat, I spoke with a man in the lobby. He was there with his seeing-eye dog – we struck up a conversation. He asked if I was familiar with Caetano – I knew some of the repertoire, but not the majority of Caetano’s vast catalog.

He smiled and said that Caetano wrote some of the most beautiful
lyrics I would ever hear – though it might lose a bit in the translation, it is quite obvious that the beauty and craft in the lyrics are undeniable.  Caetano Veloso’s prominence on the world stage is well-deserved.  Caetano said that having kids was the most important thing in his life.  He is clearly leaving behind a legacy of song and family that will carry on the flame of his passion for music and a voice for the people of Brazil and the world.

Please check out https://www.acehotel.com/losangeles/theatre/theatre-ace-hotel/  to find out about upcoming events.