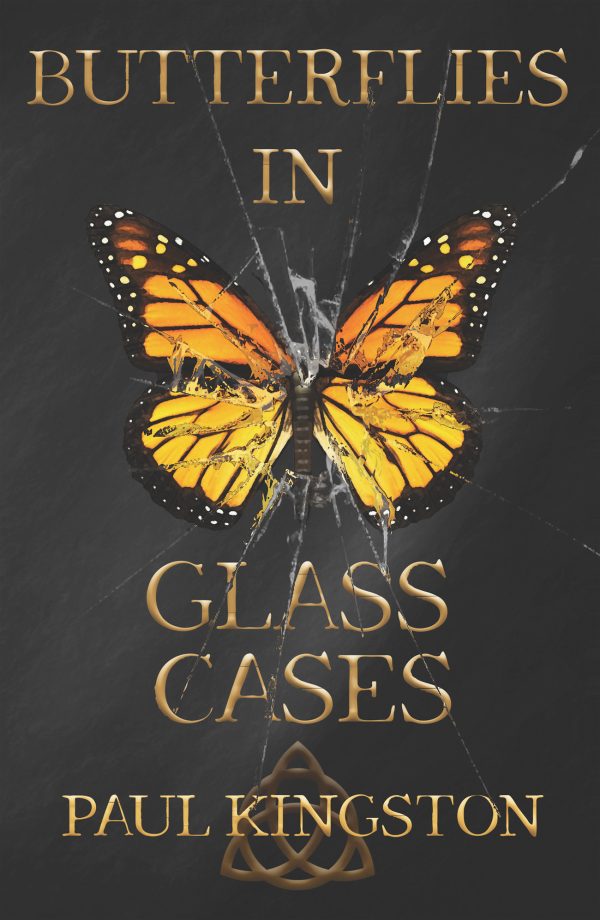 The best way to review this deep dive into gothic horror is to imagine Stephen King talking to the young novelist about his first venture into epic storytelling.

Los Angeles, California (The Hollywood Times) August 9, 2021 – Paul Kingston knows from experience that very little in life is more challenging than taking on the composition of your first novel. In Butterflies in Glass Cases, Paul Kingston takes on a tale drenched in history and mythology with a bravura that is undeniable. At the same time, while wrestling with massive themes of redemption and transcendent darkness, he also burrows down into the specifics of his settings.

Indeed, from the beautiful printing job done by Story Well Publishing to the in-depth research done by the author to foster authenticity, nothing feels ignored in the process of creation.

Despite being an impressive entry into the Gothic horror pantheon, Butterflies in Glass Cases is still the first novel. Like with the vast majority of first novels, there are challenges that the novelist is unable to overcome in his initial venture into storytelling. The problem is that many of these challenges cannot be described in a fair review. Since they deal with structural questions that carry from the start to the conclusion, detailing is almost impossible without revealing. Such a review would give away the whole kit and caboodle of this gothic mystery.

Indeed, the epic storytelling of Butterflies in Glass Cases is founded in a dream-like mystery. In the wake of a horrific car accident that took her brother’s life and blackened her name, Patty Woodall is plagued by nightmares. Despite a Master’s Degree in Child Psychology, she is unable to find a job. Trapped in her parent’s home, her world overflows with resentment and bitterness. Rejected, she sinks into despair until an unexpected job offer arrives in the mail.

Hired by the Matriarch of the Morgan Estate, who looks after two orphaned girls, Patty accepts the position as a maid and helper around the place. When she arrives, however, the house turns out to be a sprawling mansion in the middle of a frightening forest. As our POV character, everything is experienced through Patty’s eyes. With ancient glyphs carved into trees and doorways, the dark history of shipwrecks and exile revealed, and the two odd little girls ensconced in such antiquarian surroundings, there is a mystery that creeps under her skin.

Above all, the mystery must be maintained. Thus, such a revelation of the mechanics of the story structure would violate both the writer’s intent and the future reader’s enjoyment. Alas, what is a reviewer to do when faced with such a challenge?

What Would Stephen King Say About Paul Kingston’s Debut Novel?

Contemplating this conundrum, I came upon the idea of Stephen King taking over this review. By the way, as an introduction to the upcoming quotation, you must know that Paul Kingston’s nickname is PK. Reading, we learn about the young writer’s history: “Studying the craft through a steady diet of Stephen King’s narrative structures and Clive Barker’s intricate imagery, PK soon found himself writing.”

Hence, given Paul’s deep love since childhood of the vast oeuvre of Stephen King, the unargued master of the American horror genre over the last half-century, it makes sense to hand the reins over to the master himself. Indeed, I love the idea of Stephen King reading this debut horror novel, then talking to the young author about his ambitions and his achievement.

Imagine Paul Kingston pacing back and forth as he awaits his arrival in a dark library in an old house with bookshelves filled with ancient tomes. The waiting is soon over as the oak door opens and Stephen King ventures into the room, holding Butterflies in Glass Cases like a child in his hands. Nervously shaking, Paul Kingston waits to see what the Master of Horror will say. In silence, Stephen King places the volume on a side table with care, switching on the lamp to illuminate the impressive room that speaks of writers and readers long past. Behind him, Paul waits and watches as the great writer turns toward him, adjusting his glasses.

The anticipation of the moment swiftly ends as Stephen King walks over and embraces the young man. After a moment, he holds him at arm’s length, hands-on Paul’s shoulders, saying, “What you have done can only be accomplished by a true writer. Some aspects of writing can be taught, and some can be learned, but others are a bounty born of natural talent. There is no doubt in my mind that you were born with that talent.”

Sitting Paul down at a mahogany desk, Stephen King continues, “The talent shines forth in the forging of the details, all of your extensive research, to create a compelling atmosphere. From reading your book, I know what it feels like to walk the halls of the Morgan Estate. Moreover, you do the same excavating when going deep into the mind of your protagonist. Ever since I wrote Carrie, which my wife was smart enough to save from the wastebasket, I have known the challenge of a man writing from a woman’s perspective. There is so much that must be avoided, so many casual pitfalls, and you avoid these traps with a skill that impresses.”

Taking a seat next to Paul Kingston, Stephen King reveals the other side of the coin. With the compassionate criticism of the giants, he says, “The good news, Paul, is that what you achieve cannot be taught. The more difficult news to tell you is that the flaws of Butterflies in Glass Cases could have been avoided by more time spent on structuring your story. Although you succeed in creating the gothic atmosphere of the Morgan Estate, you also get lost in those details. A mystery only works when it continues to build, and you lose momentum in the middle. Although I enjoyed the revelations of the ending, I wished they had come sooner by being structured into the story. You were worried you would reveal too much and give it away. Also, you felt imprisoned by the POV of your protagonist. Although Paddy is a well-drawn figure, who you put through the ringer, her POV also limits what you were able to accomplish.”

Taking a deep breath, Stephen King continues: “Rather than figuring out how to structure the back story and the reveals when outlining the novel’s story, you jumped into the writing. Such excitement that leads to a rash start is common for young writers. I hope next time around, you do greater justice to your gifts by telling a story where the conflict continues to build and where the revelations of the end are layered from the beginning. Indeed, your talents deserve nothing less than to sing within a well-crafted skeleton that is built with precision.”

If he ever sees this review, which is doubtful, I hope Stephen King forgives my bravura in trying to capture his voice. As a first novel, Butterflies in Glass Cases is nothing less than an impressive achievement. It deserves to be read as the introduction of a talented new writer to the horror genre. I look forward to reading what Paul Kingston will write in the future. I also hope the real Stephen King will read his books because I know he will celebrate what this young man has to offer the world. If you want to discover a true talent at the beginning of what will be a great journey, then you should read this notable first novel as well.