Burbank, CA (The Hollywood Times) 9/14/21 – A packed ballroom at the Burbank Marriott (and isn’t that a nice return to old times!) honored three generations of the Bridges clan at the closing night of the Burbank International Film Festival on Sunday, as well as awarding Beau Bridges and his daughter Emily the President’s Innovation Award for their submission Acting: The First Six Lessons.

Based on the 1933 novel by Richard Boleslavsky, the docudrama was co-written by Emily Bridges and her father, and directed by Emily. The story unfolds in six lessons over the course of the relationship between The Teacher (Beau) and The Student (Emily), and features interviews with three generations of the Bridges family: Lloyd Bridges, his children Beau, Jeff and Cindy, and Beau’s son Jordan. 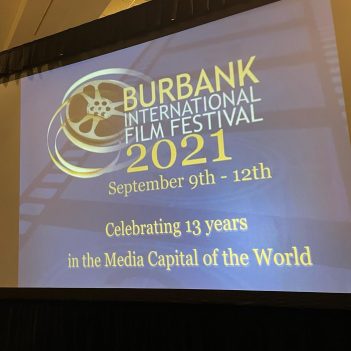 “My dad gave me the book that this was based on when I was 16 years old,” said Beau Bridges, “so this is going way back. I’ve been in the business now, gosh, 70-plus years.”

70-plus years? That sent everyone scrambling to IMDB to discover that Bridges is, indeed, almost 80.

“I’ve had a lot of projects in my mind that I wanted to do,” he said. “This is the first one that ever came to fruition. So I’m saying to all you guys out there: Don’t give up. You never know.”

Emily, who makes her directorial debut with this project at age 35, turned to her father and added: “Collaborating with you has been one of the greatest joys and most creatively fulfilling parts of my life.”

The closeness of the Bridges family was emphasized by presenters Rachel Boston (SEAL Team) and Bruce Davison (X-Men), who each had telling anecdotes to share, as well as in a clip montage that not only showed off some of the family’s greatest hits (Jeff’s The Big Lebowski is obviously a crowd favorite) but even showed Jeff working with dad Lloyd Bridges as a child on Sea Hunt.

“Watching Lloyd Bridges as heroic Mike Nelson made me want to grow up to be… a marine biologist,” joked Oscar and Emmy-nominated (and Golden Globe winner) Davison.

Beau got to work with dad as a teen in the 1960’s western The Loner. But it needs more than nepotism to thrive in Hollywood, he contends. “What a blessing for Jeff and I to be in our father’s show. It was a beginning for us, and there are a lot of actors out there that never get that chance. The first job is the hardest one to get.

“But, my dad said, you have to work your ass off for the second one. I’m glad I had a teacher like that.”

The awards ceremony closed out a festival featuring 185 films from 40 countries. Other presenters included Priscilla Presley, who gave the Faith-Based award to Rekindling Christmas, and Tony Denison (The Closer) who awarded the K-12 student film award to The Shoes.