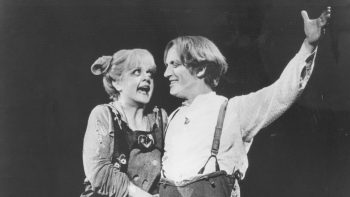 September 25, 2019 —  BroadwayHD, the premiere streaming service for theater fans, kicks off the month of October with a binge-worthy lineup of performances that are sure to excite audiences everywhere.  Leading the charge is the eerie classic Sweeney Todd: The Demon Barber of Fleet Street, starring Tony Award® winners Angela Lansbury and George Hearn as Mrs. Lovett and the vengeful Sweeney Todd.  On October 17th, Jekyll and Hyde, starring David Hasselhoff in his Broadway debut, will make its way to the platform.

As part of BroadwayHD’s partnership with Stratford Festival, subscribers will have access to the critically-acclaimed Stratford Stage’s 2017 production of Macbeth on October 24th, starring Ian Lake and Krystin Pellerin.  Finally, on October 31st, Hugh Grant and Elizabeth McGovern star in a dramatic tale of love and loss in The Changeling.

Additionally, BroadwayHD is getting into the spirit of Halloween with a scary awesome playlist, debuting in October, including chilling performances like Jekyll and Hyde, Macbeth starring Patrick Stewart, The Toxic Avenger, Ruthless, and more.

“It’s all treats and no tricks this month as we round out our library with these legendary shows that have proved to be audience favorites over the years,” said BroadwayHD co-founders, award-winning producers, and filmmakers Stewart F. Lane and Bonnie Comley.

See below for a full line-up of what BroadwayHD subscribers can see starting this October:

BroadwayHD introduces award-winning theater from all across the globe with both classic and modern productions.  Fans can expect to see the full works of Shakespeare, awe-inspiring performances from Cirque du Soleil and a selection of the world’s greatest musical including Kinky Boots, Cats, 42nd Street, A Night With Janis Joplin, The Phantom of The Opera, The King and I, Sound of Music, and An American in Paris.  All performances are adapted specifically for streaming audiences to maximize the entertainment experience.  To learn more about BroadwayHD, visit www.broadwayhd.com.

BroadwayHD, founded in 2015 by Tony Award®-winning producers Stewart F. Lane and Bonnie Comley, is the only streaming service offering premium full-length stage plays and musicals captured specifically for multi-platform viewing to theatre fans across the globe. In addition to exclusive live-streamed content of the world’s best productions, BroadwayHD offers subscribers unlimited on-demand access to a library of more than 250 theatre productions from Broadway, The West End and beyond.  If You Can’t Get to Broadway, Get to BroadwayHD.