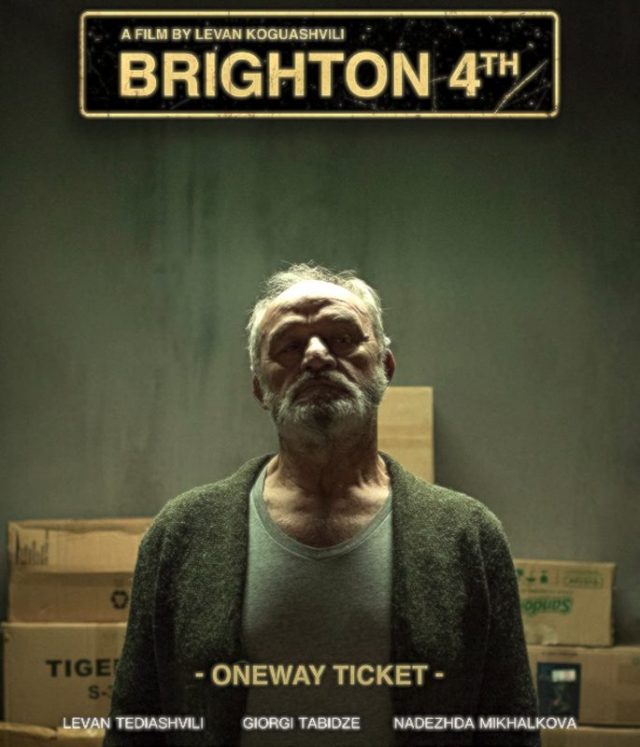 Los Angeles, CA (The Hollywood Times) 12/28/21 – Levan Koguashvili’s Brighton 4th (Republic of Georgia, 2021) recently screened at the Asian World Film Festival in West Los Angeles in November and will be coming  to the Laemmle Theatres in Los Angeles in February for a longer engagement. This new film by the accomplished director from the Republic of Georgia has garnered numerous awards at international film festivals. Levan Koguashvili once studied filmmaking in New York City and understands so well the neighborhoods of New York and the area of Brighton Beach on Long Island known as “Little Odessa.” Brighton Beach, with its high-rise apartment buildings and traditional ethnic restaurants and food markets, is known for its tight-knit Russian and Eastern European communities, which include Georgians and other groups from the former Soviet Union. After making several successful feature films in the Republic of George, Koguashivili decided to return to New York and film a story written by Boris Frumin about the expatriate community of Georgians living in Brighton Beach.

Brighton Beach, Brooklyn, once a cultural melting pot for Jewish emigrants and artists and now home to Russian-speaking Georgian emigres not afraid to resort to gangster tactics to get what they want. Boris Fruman’s idiosyncratic screenplay combines the shattered dreams and fatherly love of an aging Georgian man who was once an Olympic wrestling champion in his youth. Brighton 4th is a dry absurdist narrative that shows how these hapless immigrants hope to capture the elusive American Dream. Levan Koguashvili’s Brighton 4th has been selected at Georgia’s submission for the Best International Feature Film at the 94th Academy Awards.

The film introduces us first to Kakhi (played by Levan Tediashvili) who has his own problems in Tbilisi, but he has an apartment in the city and a loving wife who is recovering from a broken arm due to a fall in the street. He seems to care more about his dog than anything and skypes regularly with his son Soso (Giorgi Tabidze) in Brooklyn, New York, who is supposed to be studying to become a doctor. After a short prologue set in Georgia involving Kakhi helping out his brother, who’s recently lost his apartment due to a gambling addiction, the film shifts to the Russian enclave of Brighton Beach. Because he is tired of things in Tbilisi and worried about his son and his wife’s insistence that he check up on Soso, he decides to fly to New York to visit him. Tediashvili is actually a former five-time Olympic wrestling champion and not a professional actor. At age 73, this is his screen debut.

When Kakhi arrives in New York, he gets a ride to the run-down boarding house apartment where his son Soso lives with a number of other emigre Georgians. Kakhi and his wife had previously lent Soso $15,000 for his medical studies and to pay a woman named Lena (Nadezhada Mikalova) for a fake marriage and a Green Card. Soon we learn that Soso has a huge gambling debt and owes $14,000 to some tough Georgian gangsters. Kakhi tries to figure out what to do to help his son and begins to work at odd jobs – some of them in circumstances that are quite humorous. Among the motley crew of local Georgians, played by mostly non-professionals, is an ex-wrestler Amir, who knew Kakhi back in his days of wrestling in Georgia. Amir wants the $14,000 back that Soso has lost in gambling and threatens to kill Soso unless he comes up with the money quickly. After several misadventures along the way, eventually, Kakhi comes up with an idea for helping out his beleaguered son. On the misty beach near Coney Island, Kakhi challenges Amir to a wrestling match, hoping to win and erase the debt.

Kakhi’s efforts to help his son form the crux of the thin, familiar-feeling storyline, although screenwriter Boris Frumin indulges in numerous narrative detours along the way. These include an amusing episode in which Kakhi takes a job helping out an elderly couple, only to get sexually propositioned by the wife; Soso’s troubled relationship with a social worker (Nadezhda Mikhalkova, daughter of famed Russian director Nikita), who has agreed to marry him so he can get a green card; and a lengthy digression involving Kahki going along with a plan to kidnap a Kazhak man (Tolepbergen Baisakalov) who has been refusing to pay the Georgian women he hires as hotel maids.

Tediashvili’s moving lead performance makes the film special. The film has a deeply lived-in atmosphere, thanks not only to the authentic locations and milieu but also the superb supporting cast – including Soviet and Georgian acting legend Kahki Kavsadze, who plays an aged waiter who loves singing – and to whom the film is dedicated. His final moment in the film of leading the Georgian men in singing a traditional polyphonic Georgian song provides a hauntingly solemn grace note that is not quickly forgotten. The songs and Georgian cultural resonances make this film quite memorable – harkening, at times, back to the feeling of earlier Georgian films from the Soviet era of the 1970s. Director Koguashvili also mentioned at the Q&A the importance of attending film school in New York City and noted his appreciation of American filmmakers from the 1970s like Robert Altman, John Cassavetes, and even Jim Jarmusch.

Brighton 4th is Levan Koguashvili’s third feature film. Previously he made Street Day (2010) and Blind Dates (2013) in the Republic of Georgia as well as a number of documentary films. Blind Dates was very successful and garnered numerous awards at international film festivals. Brighton 4th recently won the Best International Narrative Feature Film prize at the Tribeca Film Festival, taking that honor as well as best actor for Levan Tediashvili and best screenplay for Boris Frumin. 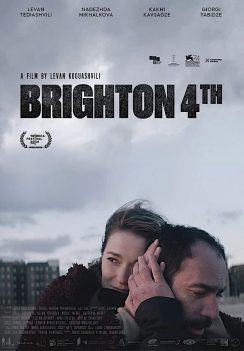