Los Angeles, CA (The Hollywood Times) 5/12/19 – As part of the Odyssey Theatre Ensemble’s 50th anniversary season, there is no denying the excellence of the latest staging of Irish playwright Brian Friel’s Faith Healer. Presented as a Rashomon-like mystery in four extended monologues by the three principal actors, the question ultimately is not about what happened. By the end, the pieces do come together in a tragic rendering of loss and failure. Instead, the essential question becomes whether or not an audience can bear the harsh details as such a brutal story unfolds. Indeed, during the intermission, it almost feels like you have been throttled by excellence.

As staged by Odyssey artistic director Ron Sossi, the production ran from the March 23 opening to a final performance on May 12. Upon entering the theatre, you feel like a visitor to a dreary hall tinged with a lingering sadness. On the back wall, an age-worn banner that proclaims “The Fantastic Francis Hardy, Faith Healer, One Night Only” fails to change the darkened mood. This bleak atmosphere transitions well into the powerfully-acted, unnerving life story of an itinerant Irish faith healer. Although the tale hits the audience hard as it unfolds in multiple monologues, it also proves to be strangely elusive — the various perspectives of the narrative demand that the audience decides what is right and what is not.

The story begins with the man known as the Fantastic Francis Hardy but presented to us as Frank, a shabbily-dressed and spiritually-exhausted drunk. Played by actor Paul Norwood, Frank’s introduction is such that we never buy into the legitimacy of his healing abilities. Although he might be possessed of some sort of “gift,” we are much more convinced that his real talent lies in the draining of flasks of whiskey. Indeed, as a ragged mountebank on his last legs, he embraces the theatricality of his performances while also being plagued by the echoes of his not so subtle chicanery. More often than not, when faced with a desperate hall of wounded souls, he knows that he has no power to heal any of them. Ultimately, he questions why his German mistress and his Cockney manager remained by his side for so many years.

Frank is followed by his mistress who we learn in reality is his patient, but long-suffering wife. As portrayed by Diana Cignoni, Grace could not be better named because she has been forced over the years to display poise and decency in the face of shabby living conditions and even shabbier treatment. The length and force of Grace’s monologue are almost too much to endure. With an emotional tautness that resembles a brave soul trying to hold back a tidal wave of tragedy, Grace is the broken heart of the production. By the end, a desire to comfort her is pushed back by a fear of falling into the pit of terrible karmic consequences that define her life.

After the intermission, there is a certain relief at first when the comic musings of Teddy, Frank’s promoter and set-up man, take the stage. When Teddy recalls some of the past acts he managed before Francis Hardy like the bagpipe-playing whippet, we can picture them in the mind’s eye, and we long to see them in reality. Although Teddy lightens the load, he also clarifies the murky differences between Frank and Grace’s account of their lives. From their struggles to make ends meet to the roadside burial of a stillborn baby, from the battles between wife and husband to the final disaster upon a return to Ireland, Teddy allows us to peek behind the curtain. Unfortunately, the truth that we behold is far from what we hoped. Indeed, so much, including so many of their dreams, have been lost along the way.

In the final monologue, Frank returns to reveal what happened in Ireland. He speaks of the cures his gift bestowed now and then, highlighting one inexplicable night when so many were healed. Like so many miraculous performers, there once was a taste of greatness when the dream became a reality if but for a single show. If the play falters, this is the moment when that stumble is revealed. 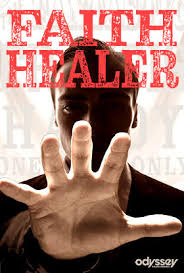 Although Paul Norwood expertly portrays the seedy drunkenness and dashed hopes of Frank, he does not convince us of the gifts of the faith healer Francis Hardy. What is needed is a sense of the charisma of such a man, yet this quality was missing from his performance. Instead, the charlatan stood out so strongly that we never fully buy into the tales of past miracles and triumphs. Indeed, it is hard to understand why Grace and Teddy would have remained by his side for so many years of trials and tribulations.

Overall, however, the quality of the staging, the presentation, and the acting of Faith Healer at the Odyssey Theatre should be celebrated. When you have to ask whether you can survive being throttled by excellence, what ultimately lasts beyond the throttling is the undeniable superiority of such a performance.