Los Angeles, CA (The Hollywood Times) 11/11/18 – As the fires raged in Los Angeles on Friday – two boxers met for a final showdown at the Forum for the season finale of The Contender. The match aired live on the premium pay television network EPIX with Brandon The Cannon Adams and Shane Sugarman Mosely, Jr. squaring off in the ring. This reboot of the original show was originally helmed by DreamWorks. This was the end of 12 episodes of boxing competitions – (two teams of eight fighters – 16 total – who fought for the chance to win the championship) – that EPIX states, “aired unedited and in their entirety throughout the season.” 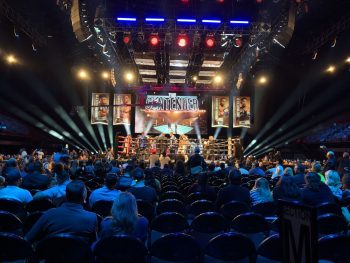 The 16 young boxers were seen each week – pushing their skills, strength and endurance as they prepared for their weekly elimination fights and hoped for a shot at the big time.

Michael Wright, President, EPIX had said, “Boxing goes hand-in-hand with premium television, and there’s no better way to experience the sport than by watching the drama unfold in real-time,” “The Forum in Los Angeles has been home to some of boxing’s most preeminent fights. This opportunity gives the contenders the platform they deserve, and fight fans an adrenaline-filled, live experience they weren’t expecting.” 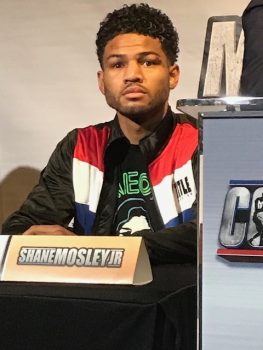 The boxers lived and trained on site in unrealistic conditions with scenes that over-dramatized their lives in pre-taped episodes – but that changed with the airing of the live finale – with a few major issues. There was no blow-by-blow commentary or utilization of the giant screen showing the match punch-by-punch – which was frustrating to view but money always gets saved somewhere and frequently in the wrong places.

Brandon, the shorter and stockier of the two boxers – and eight pounds lighter – was coached by legendary Freddie Roach while Shane, taller with a longer reach – had renowned Philadelphia trainer Naazim Richardson in his corner. The 10 round fight started out with the two dancing around the ring feeling each other out. The two were friends before, during and after the match according to the duo after the fight.

It took the two boxers until the 6th round to cause a commotion. Freddie Roach could be seen in serious discussion after the 5th with Brandon – who smiled and danced his way through this match. When the bell rang? Adams came out swinging to do some damage and put Shane Mosley through paces and hits that a lesser boxer couldn’t have withstood. Mosley, Jr. took a beating but he hung in until the 10th round when by unanimous decision, Brando The Cannon Adams was crowned the new middleweight belt champion of The Contender and awarded a $250,000 prize.

When asked afterwards what was said in the exchange before the 6th round, Freddie Roach says, “He (Brandon) picked it up when I asked him to. I told him you can do whatever you want to. It was about the time we needed it and it worked out really, really well and he fought a very good fight. I’m very proud of him.”

Shane Mosley, Jr. surrounded by his coach and parents said when it was stated that he didn’t buckle and got in some great punches, “It was a great fight I trusted too much and I took for granted my grit. I stood there and I fell short. I felt like I should’ve played it differently but he’s a great fighter and I’ll look at the fight because I wasn’t watching, I was in it.”

The two were friends before, during and will remain friends after the fight, according to both boxers and will continue their careers in the sport.