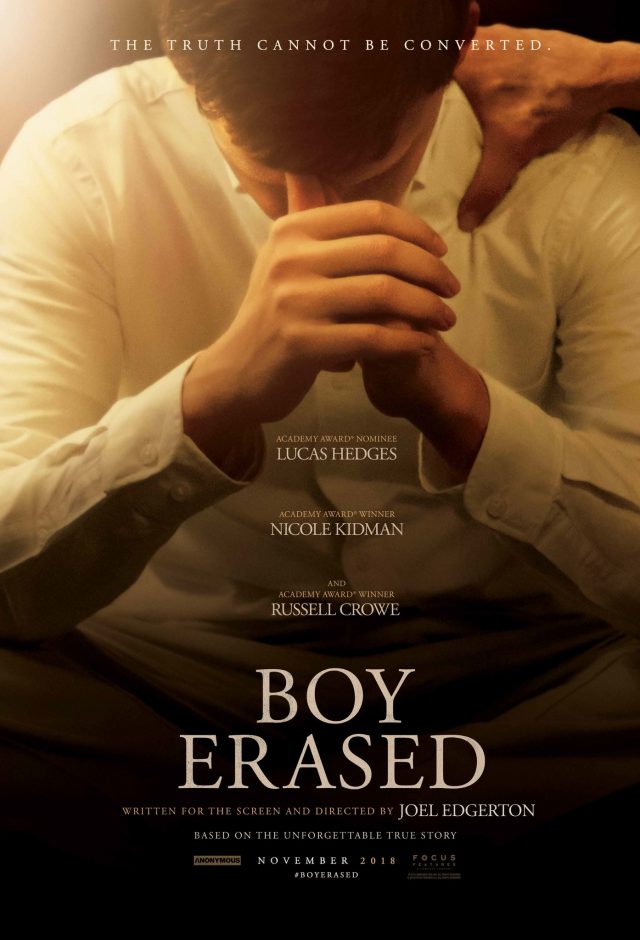 “Boy Erased” depicts the horrors of conversion therapy, a program that thousands of LGBTQ members have undergone in attempts to “fix” them.

Los Angeles, CA (The Hollywood Times) 10/30/18–Boy Erased recounts the chilling story of a young man being ridiculed by his family, friends and faith for being gay, something millions of people know all too well.

Jared is the son of a small-town Baptist pastor who gets outed to his parents at age 19. In efforts to “fix” him, Jared’s parents, Marshall and Nancy, send him to a gay-conversion program. The teen is faced with the ultimatum to attend the program or to be rejected by his family and community. The film follows the troubling reality of conversion programs and the lifelong impact it has on relationships as well as the individual.

Directed by Joel Edgerton (The Gift), Lucas Hedges shines alongside Academy Award winners Nicole Kidman and Russell Crowe in this true story based on Garrard Conley’s memoir, Boy Erased. Hedges (Manchester By The Sea, Ladybird) portrays the role of Jared beautifully; we can feel his confusion, pain, and longing for acceptance throughout the entire film. Tackling such rough subject matter, this film requires a wide performance range as well as a strong level of skill; Hedges work was exemplary.

Emotional, verbal and physical abuse in conversion therapy was illustrated in a way that was hard to watch at times but delivered the topic in a clear way. The head therapist Mr. Sykes, portrayed by Edgerton, tried to poison the teens against their parents, instilled that “God won’t love you the way you are right now,” and beating them with bibles. The dynamic relationships between Jared and his parents, peers and Sykes helped intensify the struggle to understand as well as the severity of religious rejection to lesbian, gay, bisexual, and transgender people worldwide. Approximately 700,000 LGBTQ adults have undergone conversion therapy at some point in their lives, according to a January 2018 UCLA study. 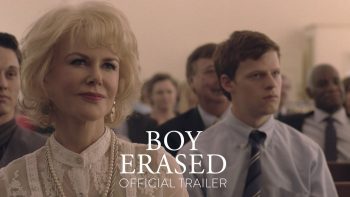 Marshall and Jared’s relationship is frustrating yet promising. At the beginning of the film, Jared had a girlfriend, attended church every weekend to listen to his dad’s service, and was guaranteed to take over the family Ford dealership. The moment Jared came out, everything changed. Marshall’s “pray the gay away” mentality is what embarked Jared’s journey at the program; Jared would do anything to gain his father’s approval again. As the film progresses, we see periods of silence, anger, miscommunication, and eventually a mutual understanding between these two characters. Crowe’s uncanny resemblance to the real-life Marshall does not compare to his spot-on performance, nailing the role by spending time with Conley’s father

Another theme present in this film is women “falling into line.” Kidman’s character felt as though she could not speak up to her husband when he decided to send Jared to conversion therapy. Nancy is the only parent present throughout Jared’s therapy and arguably afterwards; she observes his struggles and questions the authenticity of the program. The soft-spoken mother specifically has the biggest progression in this film and eventually takes a stand; something many parents in her situation take too long to do or never do.

This shocking, heart-warming, educational film is definitely worth seeing and most likely will end up with multiple nominations this upcoming awards season. Boy Erased will be released in theatres worldwide this November.