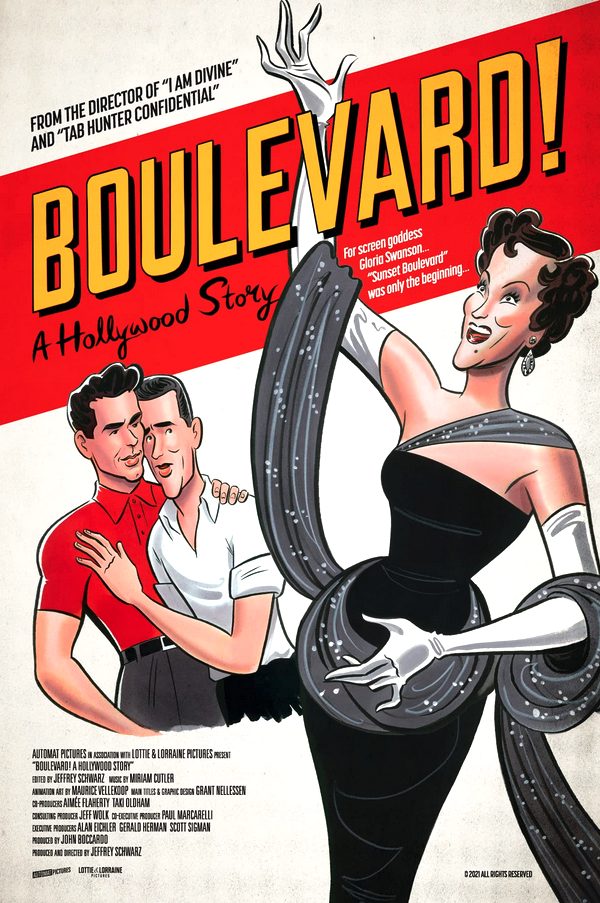 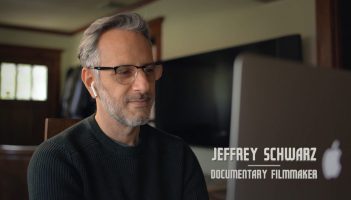 Los Angeles, CA (The Hollywood Times) 8/17/21 – Premiering at this year’s OUTFEST 2021 in Los Angeles on August 17 is Jeffrey Schwartz’s new documentary Boulevard! A Hollywood Story (Automat Pictures, 2021). This is the true story of Gloria Swanson’s attempt to get a musical version of the 1950 film Sunset Boulevard made, and the bizarre love triangle that derailed the whole venture. It is well-known that in 1994 Andrew Lloyd Webber adapted Sunset Boulevard as a Broadway musical, but few know that the idea for a musical adaptation of Billy Wilder’s 1950 movie was actually first formulated by the movie’s star, Gloria Swanson. From 1952 to 1956, Swanson worked with same-sex couple Dickson Hughes and Richard Stapley on writing the book and score. They were almost finished when the love triangle between the three derailed the project. Schwartz’s investigation into the fate of the original Sunset Boulevard musical led him to track down Steve Wilson with the Film Archive of the Harry Ransom Center at the University of Texas Austin and Stephen Bock, of the fairly obscure music publishing company in Montrose, California. It turns out that Gloria Swanson gave all her papers to the University of Texas in 1980 shortly before her death in 1983. Curiously enough, it also turns out that Stephen Bock not only had musical scores written by Hughes and a box of photographs and memorabilia from Stapley in the attic of his shop. But more importantly, he had recorded a video interview with former actor Richard Stapley, which is one of the central sources of information about the unrealized Sunset Boulevard musical and his own life. Director Jeffrey Schwartz has a long list of achievements in film and television, including the recent films “I Am Divine” and “Tab Hunter Confidential.” 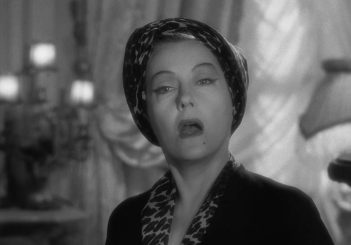 The first part of the documentary is largely about Gloria Swanson and her triumphs in the silent film era as one of the highest paid actresses in Hollywood and her less than impressive move into dramatic roles with “talkies” arrivin. in 1929. Of course, it was none other than the role of an aging and forgotten movie star Norma Desmond in the 1950 film Sunset Boulevard that resurrected her career in Hollywood and an Oscar nomination. Commentary on Swanson’s career is provided by film historians Cari Beauchamp and David Del Valle. Brooke Anderson, the granddaughter of Gloria Swanson, who knew her well, points out that Norma Desmond in Sunset Boulevard was just a role for her and not about her own life: “I don’t actually know anyone who lived like Norma Desmond.” However, the story that is revealed in the second part of this documentary suggests that perhaps Gloria Swanson internalized the character of Norma Desmond more than she realized.

Much is revealed when we see clips from the videotaped interview that Stephen Bock did in 2003 with Richard Stapley, where Stapley talked about his long career as an actor in Hollywood with MGM Studios and later in England and Europe, but he never became a real star. Stapley was twice married to women, but it turns out that one of his greatest was actually a man, namely Dickson Hughes, who he met in a hotel piano bar when Hughes was performing. According to Hughes, it was love at first sight. There are obvious gaps in the narrative about the relationship of Richard Stapley and Dickson Hughes and we really never know much about the years they spent together. To help fill in those gaps in the narrative, Schwartz relies on highly-stylized animated sequences by Emily McCourt and Bill Grigsby that seem a bit too cartoonish and stereotypical.

Drawing on a phone interview from 2003 when Dickson Hughes was alive and living in Palm Springs, some of the pieces of the relationship between the two men becomes clearer. As David Del Valle explains it, “It was so unbelievably difficult to have been gay in the 50s. No one knew because no one wanted to know.” Stapling and Hughes described their relationship publicly as writing partners, one talented at composing, the other good as a lyricist. Meanwhile Gloria Swanson became less enamored of Hollywood and moved to New York City in the 1940s, where she was famous for being herself. Her business sense along with her aura of being a big star, led to stagework on Broadway, her own cosmetic line, and her own clothes line. After she was being interviewed on a television talk show in New York, Billy Wilder found her when he was casting for Sunset Boulevard and, together, they created what was to become the “character” of Norma Desmond. After the success of Wilder’s film in 1950, there was little prospect of work for the aging actress. At that point Stapley and Hughes showed up with a proposal for making Sunset Boulevard into a musical. Hughes composed the music and Stapley wrote the lyrics – which feature with Swanson’s own singing of several tunes in the remainder of this documentary. She believed that Paramount would give her the rights to the screenplay to make it into a musical and under that belief, she proceeded with the project with the two young men.

The Wilder film Sunset Boulevard is a dark story about aging and rejection in Hollywood. Wilder thought it would make a better opera with its mad scenes, and perhaps he was right. Broadway musicals of that era, in the mode of Rogers and Hammerstein, were upbeat and full of romantic optimism. Three months in Palm Spring had the two men living with Gloria Swanson and working on the musical. Hoping to launch the musical on Broadway, the three left for New York and Swanson’s apartment on Park Avenue. After a few weeks there, things became increasingly problematic because it became clear that Swanson was very attracted to Richard Stapley, who was definitely a handsome man, and this threatened the relationship he had with Dickson Hughes. A telephone call from Paramount squashed the project and all three separated for good. Stapley disappeared back to England where he acted in a number of spaghetti westerns and foreign films and even changed his name. Hughes stayed on in New York City playing piano bars and serving as a musical director for stock companies until 1983.

In Part 3 of Schwartz’s documentary, we move forward 10 years to 1993, when the theatrical rage that year was Andrew Lloyd Webber’s musical Sunset Boulevard on London stage, starring Glenn Close. After a rave review in the L.A. Times, Alan Eichler wrote a Letter to the Editor, explaining that Sunset Boulevard has been done before. He was soon contacted by Dickson Hughes about it – and they discussed using the songs and telling the stories of Richard and Dickson with Gloria Swanson. What happened next is a largely forgotten tale about how Hughes put together the songs and shifted the story to his “gay” relationship with Richard Stapley and now the relationship of the two men was derailed by Gloria Swanson, played by Laurie Franks. The show at the Cinegrill of the Roosevelt Hotel in Hollywood was not a success but it brought the disappeared Richard Stapley back into contact with his long-estranged lover Dickson Hughes. Hughes was a generous man who worked as a pianist and singer until his decline and death in 2005. Stapley died penniless in Palm Springs in 2010 and the film ends with a comment by David Del Valle about the last days of Stapley in the hospital, when he was sitting in bed and Sunset Boulevard was on the television. According to Del Valle, Stapley said to the nurse: “See that woman Gloria Swanson. She was so in love with me, you couldn’t imagine I was the love of her life.” Such is a Hollywood story and Schwartz’s film Boulevard! A Hollywood Story is a sad reminder that “At the end of the day, all we want is just to be remembered.”

Bouvelard! A Hollywood Story screens at Outfest on Tuesday, August 17, at 7:16 pm at the Director’s Guild. In-person tickets are available as well as on-line screening options from 8/18 through 8/20. Go to: https://outfestla2021.com/boulevard-a-hollywood-story/