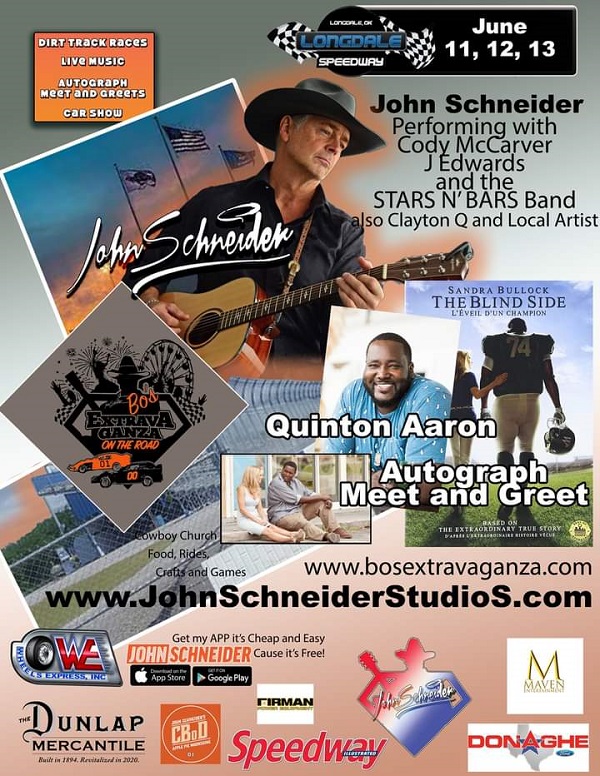 “Bo’s Extravaganza on the Road” was an event involving the community of Fairview, Oklahoma at the Longdale Speedway June 11th -13th. Three days of excitement for the fans from Dukes of Hazard days, until now, with the new movie Stand On It showing Friday night during the VIP night.

Fans flocked the Speedway for the car show, races, music, helicopter rides, a performance by the tribe Central Plains Dancers and daredevil stunts. John Schneider loves to mingle, take pictures with the fans and sign autographs.

John Schneider joined them on Saturday.

Mark Anthony, founder of Extreme Force Hollywood Stunts and Jeff Caperton of Bitter End Media Group were in charge of the extreme stunts.

Mark drove a car through an RV and jumped off a 60 ft lift after being set on fire onto an airbag.

Alicia, John’s wife, suited up in her race gear and drove a car Fiona Fierra named after a new love bug character.

Participating as a Entertainment Reporter for The Hollywood Times at this event was full circle for me.

I met John twelve years ago at the Hollywood Show in LA. Since then I attended John’s “Bo Extravaganza Birthday 2020”.

There are three pictures of the memories of John and I in my newly released CaliOkie book.

I autographed a book for John and presented it to him. He was very appreciative. CaliOkie is now available on amazon or www.pattymccall.com signed.

I enjoy everyone traveling together like one big family. Jason Kirkpatrick even invited us out to the newest tour bus, Gen X Lee to take a look inside. Gen X Lee is a 1980 Bluebird Coach. Jason is not only an actor but on this tour he is the merchandise manager. Living the dream following the Big Rig Semi which has the stage for the musicians and The Schneider’s Tour Bus.