Holden, Louisiana (The Hollywood Times) 7/22/2020 – “Follow your dream and do everything you can every day regardless of what people tell you”, John Schneider told The Hollywood Times at his Bo’s Extravaganza 2020 event. 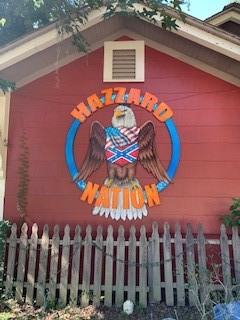 The Hollywood Times traveled nine hours to John Schneider’s studio  in Holden, Louisiana for Bo’s Extravaganza 2020! The event was held on July 17,18 and 19 after being postponed due to world events.  Normally the event is held in April for John Schneider’s birthday.

In the interview, John says that he and his wife Alicia Allain are the perfect team in life. Quote:  “If two of us are the same, then one of us is unnecessary.”

“We’ve invited people to our Stand On It set. Back in 1976, when they shot Smokey And The Bandit, I had no reason to be there, but nobody kicked me off”, John exclaimed. “This is the third Bo’s Extravaganza, I think it will be the best yet!”

The Stand On It movie is a tribute to Smokey And The Bandit, which begins and ends at a festival scene. John excitedly said, “Talk about jumping a car!  James Smith is going to be jumping the Tickfaw River to recreate that fantastic bridge jump in Smokey and The Bandit.  This incredible jump occurred during Bo’s Extravaganza!

People that know John Schneider, know that he is a man of faith.  He is also blessed professionally with the ability to be a successful actor, director, singer, musician and songwriter.

On Friday, there was a VIP Meet and Greet family event. which included a birthday cake for John’s 60th birthday.

A gourmet meal was prepared by Chef Clay Alling, the lead Chef at The Red Brick Tavern, which is owned by Debbie Glenn of the band Southern Disposition. Clay met John Schneider in 1992. when he shot a commercial in San Antonio. Quote:  “If you love what you do, you will never work another day in your life”.

We also had the pleasure of interviewing John Schneider and the leading lady of his upcoming film Stand On It, Mindy Robinson.  Mindy is a native of New England, but she now is a resident of Nevada, where she ran for Congress.  Mindy started her acting career at the age of 30 in Los Angeles, CA.

She has starred in 150 movie and television shows including John Schneider’s Christmas Cars. Quote: “Life is too short not to do something fun.”

On Saturday, the festivities included a car show, the General Lee Parade, VIP breakfast, a hood slide competition, filming of movie scene and a bonfire.

Stand On It is Dion Baia’s first movie role. He is an employee of Fox News in New York and also has a podcast called “Saturday Night Sleepovers”.  Dion currently has a new book called “Blood In The Streets”, which originated as a screenplay that was 15 years in the making. Quote: “Only a fool is sure of anything.  A wise man keeps on guessing.” (MacGyver)

Raised in Atlanta Georgia, Byron Cherry currently resides in Los Angeles, California.  Byron played Coy Duke in the The Dukes Of Hazzard from 1982 to 1983. He has worked with John Schneider on the film Christmas Cars and has a part in the new movie Stand On It. Quote: “Say your prayers.”

Born in Jane Lew, West Virginia, Mayf Nutter is an actor and  musician. He has acted in many roles, including “Days Of Our Lives”, “Fall Guy”, “Knots Landing”, “The Dukes Of Hazzard”, and many others.  Mayf stole the Limo in the ninth episode, which was the first episode that went number one called “Limo 1 Is Missing.”

As a native of Omaha, Nebraska, Lindsay Bloom has been married to Mayf Nutter for 40 years. Together they have 3 children and 4 grandchildren, which are her and Mayf’s “best productions”. Lindsay played the switchboard operator, Maybelle, on The Dukes Of Hazzard.  In 1968 Lindsay was Miss Omaha in the preliminaries for the Miss America Pageant and Miss USA in 1972. She has been in  numerous roles, with her latest film Charlie’s Christmas Wish coming this fall. She plays Mayor Aurora Cox.

Born and raised in Southeastern Oklahoma, Jason Kirkpatrick landed his first role at the age of 17, as a Dodo bird in Paula McGee’s theater production of Alice In Wonderland. Jason says he was “hooked” after this first experience, and he feels that Paula McGee changed his life.  In 2006, an agent called Jason for his first acting role, while at his Mee Maw’s funeral.  After landing his first role, Jason went on to land a role in the Walking Dead television show. In his latest release The Hunt, which was in the top five movies this year, he has a fight scene with Hillary Swank.  Jason is slated to remain at John Schneider’s studio to act in an undisclosed project. Quote: “There are two people in the audience. One is the life long lover of live performance, and this is the last performance they will see. The other person is seeing a live performance for the very first time.”

Dee Mosteller is from Summerville, GA.  He is John’s tour bus driver, which opened the door to his first acting role in Stand On It.  Quote:  “If you have your mind set on it , don’t give up

Wayne Douglas Morgan is the President and Co-Owner of Upperline Entertainment and John’s bodyguard.  He has worked extensively in film and television over the past 11 years.  Wayne has a role in Schneider’s Stand On It.

Debbie Glenn performed the song “Getting Over You”, which won CMA Texas Song of the Year. Quote: “It’s so cool getting to do what you love to do, not because you have to, but because it makes your heart beat better.  For me, that’s music.”

Keith Burns formerly of the band Trick Pony, performed at Bo’s Extravaganza and has a part in  “Stand On It”.  He is a huge Charlie Daniels fan and a long time friend of John Schneider’s. Quote: “The biggest thing in this industry is relationships.”

Jacob Lyda wrote songs for John Schneider’s Stand On It.  He is also an established songwriter in the music industry.

Cody McCarver was born and raised in Dunlap, Tennessee.  He has been entertaining for 20 years. Cody and John Schneider reached the number one spot on the Country/ Christian charts, with the song “These Hands”, which he performed at Bo’s Extravaganza.  He co-stars with John Schneider in the upcoming film Stand On It.  Cody also hosts a Sunday morning radio show called “Big Revival”, which showcases Outlaw Gospel. Cody is based in Chattanooga, Tennessee. Quote: “God is Good.” 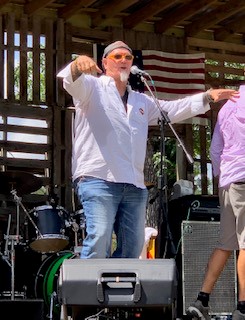 Pastor “T”Sunday was kicked off by a great outdoor worship service, led by Pastor “T” of ‘Church In The Wind’, where everyone in attendance received a wooden cross.

Jo-El Sonnier is another legendary performer who was featured at Bo’s Extravaganza. He won a Grammy in 2015 for his  album “The Legacy”, which was considered the Best Regional Roots Music Album of the Year.” He has recorded over 30 albums and has been performing Country & Cajon music for over 60 years. Jo-El recorded his first record “Little Blue Eyes” at the age of 13.  Quote: “Music is like medicine. Being different… there is nothing wrong with it Learn the lessons from life itself. Believe in your faith. Never give up.  Accept things that are given to you.  Learn from the good things, along with the bad things and try to make something positive out of the bad things.”

James Smith is a stunt man, who lives in Washington State and has jumped about 40 vehicles. This includes jumping  the General Lee 150 feet. James has a four year old son, who already shows an interest in stunts.

In 2001, he and his brother went to a Dukes of Hazzard event where they met some of the cast and crew and some Hollywood stuntmen.  James jumped a Dodge Challenger at this years Extravaganza for the movie Stand On It.  Quote: “Be good at what you Do, have your craft nailed down. Be easy to get along with and you’ll be working”

Chase Tyler, from Baton Rouge, Louisiana.  He and his six piece band were  the opening act, for the Bellamy Brothers. Chase met John Schneider at his wedding, Chase said he didn’t crash the wedding, he was invited by his manager who knew John.”  Chase’s first album “Cut to the Chase” was released in 2005.  He started performing at the age of 16 in Branson, Missouri.  His new album “Little Bit Of Everything” features the single
“Broken Road,” which is about his own personal experiences in life. Quote: “Love one another, be nice and be kind.” 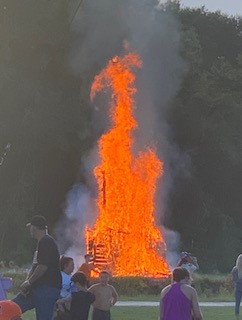 Sunday evening we were treated to a double rainbow, a bonfire, The Bellamy Brothers, and a picturesque sunset. Later that evening a fireworks show ended out the weekend.