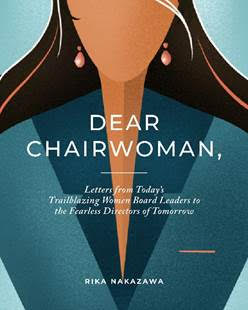 Amid the known inequity of women holding corporate board seats and, further, those chairing boards, the newly-released ‘Dear Chairwoman’ book features highly personal stories of challenges, perseverance, and success from some of the world’s most esteemed C-suite women executives and board members/chairs with corporate behemoths the likes of The Coca-Cola Company, MGM Mirage, JPMorgan Chase, Alaska Airlines, Nordstrom and more

By Merilee A. Kern, MBA

(The Hollywood Times) 5/5/21 – The numbers are dishearteningly revealing. As recently as late 2020, women reportedly held less than a quarter of board seats among America’s largest publicly traded companies on the Russell 3000, and, even on a global scale, women also held less than a quarter of the board of directors (BoD) seats that year. In fact, not only do countless global companies not have a single woman on their board, the paltry percentage of women who actually chair boards exemplify an even greater disparity. This as approximately 7.4% of the 500 largest public U.S. companies (by revenue) claims a female chair.

Given the critically important purpose of a BoD—with fiduciary shareholder representation mandates that include corporate management, as well as oversight and tactical decision-making like that related to personnel and senior executive hiring and firing, executive compensation, dividend policies and payouts, company resource management, and more—gender diversity is a fundamentally key way to represent all stakeholders. Moreover, various reports—like that in the Harvard Business Review—detail how gender diversity improves overall board performance, while studies show that corporations with female directors are often more profitable.

Although the benefits are undeniable and notable, strides are being made via initiatives like Senate Bill 826 (SB 826) requiring all publicly held companies headquartered in California to have at least one woman on their board—those businesses with six or more directors must include at least three, while boards of five must have at least two. As well, NASDAQ recently announced proposed listing requirements, seating women in board rooms continues to be an uphill battle. A myriad of recent news reports is a testament to this hard truth.

With this understanding and amid her life’s work helping advance women executives, leadership diversity authority Rika Nakazawa has authored the newly-released title, “Dear Chairwoman: Letters from Today’s Trailblazing Women Board Leaders to the Fearless Directors of Tomorrow” (HAL HOUSE, Paperback). The book features the extraordinary voices and personal stories of women leaders from around the world who have trailblazed their way to the board room, which are availed as letters to enlighten, prepare and inspire the next generation of women in business and government to pursue board-level positions. With each leading with the salutation “Dear Chairwoman,” these letters are infused with the energy, personal experiences, and front-line perspectives to motivate young women to not only pursue board governance early but also claim the “Chairwoman” title when taking that senior-most seat in the board room.

The book is replete with letters from some of the world’s most esteemed women executives who have ascended the senior leadership ranks at premier companies such as Microsoft, and who sit on boards for global behemoths the likes of The Coca-Cola Company, MGM Mirage, JPMorgan Chase, Alaska Airlines, Nordstrom and more. Microsoft Corporate Vice President Gavriella Schuster, one of the title’s contributors, notes, “This book is wonderful because it enables young women to understand the story behind the stories. The 40 very different stories showcase just how many paths to success there are and what drives the women behind the stories. It affords every reader the opportunity to see themselves in someone’s story and restore their faith and confidence in their own story.”

Mastersfund Managing Director and book contributor, Gillian Muessig, also underscores the value of the book’s personal story approach, stating, “’ Dear Chairwoman’ illuminates the road taken by women on their way to today’s boardrooms. Everyone’s path is a bit different. It’s the similarities that reveal how the road is paved.”

Davidson Technologies EVP AI and book contributor, Lisa Hammitt, further asserts the book’s importance—particularly amid current events—having noted, “Post Lean-in, post #MeToo, COVID, the stay-at-home economy … ‘Dear Chairwoman’ courageously calls on tribal elders with engaging folklore to guide leaders through a rite of passage, in a time like no other.” The book, and the unique stories therein, are even resonating with male allies—for themselves and for preparing their daughters for the workforce—as exemplified by their multiple 5-star ratings on Amazon.

Also notable relative to “optics” is the fact that, of the women who do chair boards, few use the word “Chairwoman” on their LinkedIn profiles or in biographies at conferences and events—instead of using monikers like Chairman, Board Chair or Chairperson. “While moving from ‘Chairman’ nomenclature to ‘Chairperson’ is progress towards solving for unconscious diversity bias in companies all over the world, the absence of the use ‘Chairwoman’ is intriguing and is an archetype I’m focused on changing.”

“Dear Chairwoman” is a fitting book for Nakazawa, who is a senior leader, entrepreneur, investor, board director, and frequent public speaker on technology-powered business transformation and diversity in leadership. As Co-founder of Austin, Texas-based BoardSeatMeet, Inc.— a company powering high-performance board rooms with gender and racial diversity—Nakazawa’s career has been focused on advancing women’s leadership in governance, technology, and business across industry verticals and global dimensions.

A technology industry veteran, Nakazawa herself has served on multiple venture boards in next-generation computing and artificial intelligence ecosystems. She is committed to deepening the intersection of analog and digital experiences through transformational innovation and the pursuit of purpose-driven collaboration.

As for “Dear Chairwoman,” Nakazawa underscores the book’s intention of sharing key insights from women who have shattered all kinds of proverbial ceilings and ascended to the board of director positions—some chair seats—in U.S. enterprises and around the world. “The stories from these extraordinary achievers are offered in the form of personal letters to the next generation of women leaders,” Nakazawa said. “They illuminate each leader’s journey to the boardroom, including the challenges experienced along the way and triumphs realized as they are fulfilling their roles within them.”

Forbes Business Council Member Merilee Kern, MBA is an internationally-regarded brand analyst, strategist, and futurist who reports on noteworthy industry change makers, movers, shakers and innovators across all B2B and B2C categories. This includes field experts and thought leaders, brands, products, services, destinations, and events. Merilee is Founder, Executive Editor, and Producer of “The Luxe List” as well as a host of the nationally syndicated “Savvy Living” TV show. As a prolific business and consumer trends, lifestyle and leisure industry voice of authority and tastemaker, she keeps her finger on the pulse of the marketplace in search of new and innovative must-haves and exemplary experiences at all price points, from the affordable to the extreme—also delving into the minds behind the brands. Her work reaches multi-millions worldwide via broadcast TV (her own shows and copious others on which she appears) as well as a myriad of print and online publications. Connect with her at www.TheLuxeList.com and www.SavvyLiving.tv / Instagram www.Instagram.com/LuxeListReports  / Twitter www.Twitter.com/LuxeListReports / Facebook www.Facebook.com/LuxeListReports / LinkedIN www.LinkedIn.com/in/MerileeKern.