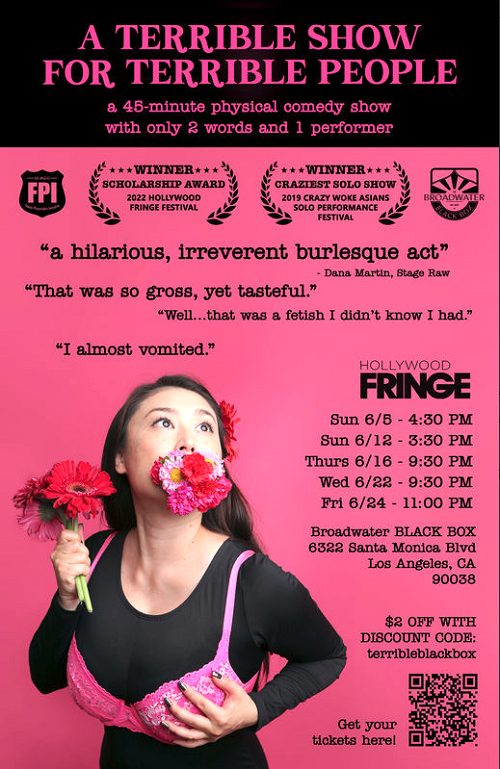 The annual Hollywood Fringe Festival of small theater performances has its surprises and its quirks. There are some amazing performances and then there are some that leave one scratching one’s head about the limits of performance as art. In this latter category is Bonnie He’s short one-woman play A Terrible Show for Terrible Show which has already sold out twice at the Broadwater BLACK BOX Theatre on Melrose in Hollywood and has two more scheduled performances.

A Terrible Show for Terrible People is a 45-minute burlesque comedy show with only 1 performer and 2 spoken words. If you like Laurel & Hardy, Buster Keaton and Benny Hill, as well as crass female clowns (a la Tijuana in the 1990s), this might be your cup of tea. The audience at the performance on Thursday, June 16, was 30-ish and a demographic more likely to appreciate mostly familiar tropes of heterosexual humor. Playing with the borders of decency, Bonnie Ho’s short performance is irreverent and sexually suggestive.

A Terrible Show for Terrible People is a unique entertainment, non-verbal (i.e., there are only two spoken words) physical comedy, with movement, dance, brief video clips, burlesque, some audience participation and some props. Prominent among the props are pickles and Bonnie’s crazy pink fetish outfits. The opening with Bonnie, playing a passive-aggressive Asian girl with flowers seems out of Charlie Chaplin’s playbook. The performance becomes increasingly interactive as Bonnie with her cute Polaroid camera seeks out a man in the audience to be her apparent love interest, eventually taking his photo, and putting into the frame over the face of a previous love interest, as she wrestles with her fingers to remove a gold ring from her finger. This is all done with mime, which is what makes for the clownish humor.

Bonnie He is an actor, improvisor and clown. She was in the short film The New Empress with Maggie Gyllenhaal on a Second City Hollywood house improv team. Bonnie exploits stereotypes of female behavior with posing and preening, flirting and fidgeting. As the show progresses, Bonnie uses more than innuendo, once she introduces a less-than-metaphoric pickle in the scene – a pickle which she conveniently tucks between her breasts when she is not trying to insert it in her mouth. This is scarcely Freudian innuendo, but soon moves towards the raunchier side of sexual foreplay. The audience seemed to love her shy-girl gone bad shtick, as it drags arbitrary audience members into her farcical scenes – usually involving the pickle and later involving her fetish for eating flowers.

Two-thirds of the way through the performance piece, Bonnie disappears for a four-minute costume change and we see a video showing us Bonnie out on the street rushing to a vintage clothing store to get a quirky dress and shoes. Along the way on the street (in the video), she encounters a young man dressed as a giant pickle – and soon they are at Echo Park Lake, on the grass, on the lake in a pedal-boat, and finally in bed – where her clueless male partner attempts to force a pickle into her mouth. None too subtle, but amusing. The last segment of the performance provides us with a transformed Bonnie who is now super-pregnant (with a prop), dancing and prancing around on stage, where she seduces another male audience member to examine her nether parts, only to discover something quite odd between her legs.

In all, the performance piece does not travel any new ground in terms of enlightening us about sex, love, relationships, or women’s desires. But it is a crazy romp that seems to please the audience. According to Bonnie He, the show is designed to have the audience “participating in the destruction of common decency.” Hence, the title concedes that it is a “terrible play” and so relegates the audience to culpability in bad taste as “terrible people” who bothered to show to discover this.

If you are interested in seeing Bonnie He’s A Terrible Show for Terrible People, there are two more performances:  Wednesday, June 22, 9:30 PM and Friday, June 24, 11:00 PM. The theatre is The Broadwater Black Box, 6322 Santa Monica Blvd., Los Angeles, 90038. Since the show will sell out, I recommend you buy your tickets soon online:  https://www.hollywoodfringe.org/projects/6450?tab=tickets