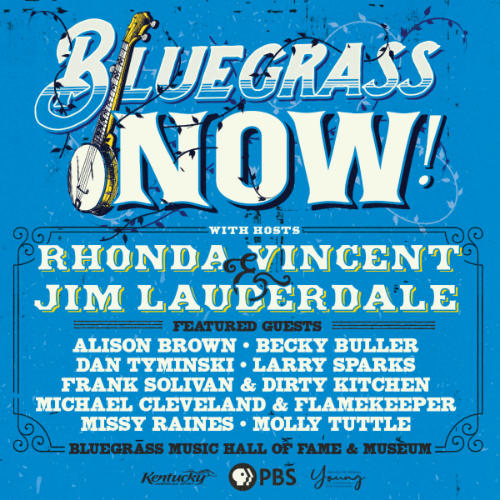 BLUEGRASS NOW! To Premiere Nationally On PBS Through March 2020

February 27, 2020 – Owensboro, KY – Ever since Bill Monroe stormed out of Kentucky 75 years ago with a hot new take on traditional tunes, bluegrass music’s metric drive and high lonesome sound has thrilled and inspired audiences around the world. That bluegrass high energy and soulfulness was captured live in December of 2019 at the Bluegrass Music Hall of Fame & Museum in Owensboro, Kentucky for BLUEGRASS NOW!, a nationally televised PBS special premiering Saturday, February 29.

Featuring hosts Rhonda Vincent and Jim Lauderdale and an all-star cast, BLUEGRASS NOW! is a masterful homage to bluegrass across genre, gender, and generations.

“This feels like a homecoming as many of today’s most prominent bluegrass artists make a pilgrimage back to the source of the music to document their own musical journeys,” remarked Chris Joslin, Bluegrass Music Hall of Fame & Museum Executive Director. “If bluegrass music is Kentucky’s gift to the world, BLUEGRASS NOW! feels like Christmas morning.”

From stunning up and comers to beloved Hall of Famers, BLUEGRASS NOW! celebrates musical milestones and the breadth of the genre.