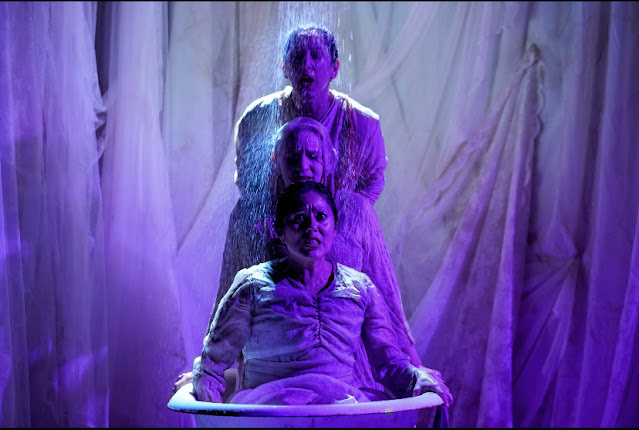 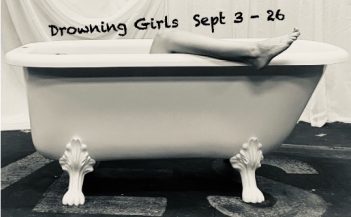 Hello Friends. It’s good to be back and I hope to continue with my blog reviews of productions in the San Diego area now that theatres are opening their doors. I am not a reviewer, but I express my opinion(s) as clearly and honestly as possible. For this play, I might suggest you read some history about these murders. The below production should not be missed! 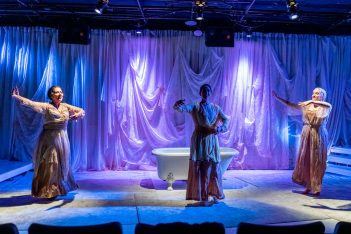 If you are in the San Diego area and looking for some serious theatre, then your best bet is the stirring and exciting production of Drowning Girls playing through September 26 at OnStage Playhouse in Chula Vista just a few miles south of the city. The play written by Beth Graham, Charlie Tomlinson, and Daniela Vlaskalic concerns the real-life murders of three women: Bessie Mundy in 1912, Alice Burnham in 1913, and Margaret Elizabeth Lofty in 1914 by George Joseph Smith who was a notorious British serial killer and con artist. He had several aliases, which included Oliver George Love, Charles Oliver James, John Lloyd, and Henry Williams. He is famous for the “Brides in the Bath” Case was tried, convicted, sentenced, and executed by hanging.

In this fascinating San Diego area premiere, the OnStage Playhouse production of Drowning Girls brings the story of Bessie, Alice, and Margaret who have two things in common: “they were married to George Joseph Smith, and they are dead.” In each case, he married each woman, persuaded her to sign over to him her entire savings and name him the sole beneficiary of her life insurance policy, then drowned her in the tub, after establishing that the woman was prone to seizures…and that is how Bessie, Alice, and Margaret met their watery end. 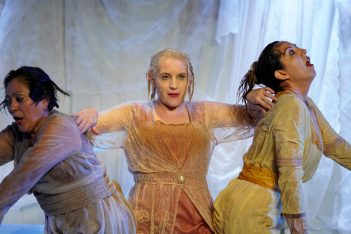 As this just over an hour-long production unfolds three amazing and well-cast actors bring these women back to life. Not only playing their named characters they also embody all the other characters, from Smith to various family members to landladies in the homes where the drownings occurred. And that’s how we meet them…the way they were murdered by drowning. And yes, this is done with lots of water, and I mean lots. It’s not easy to act while soaking wet, but the actors Emily Candia (Alice), Carla Navarro (Bessie), and Sandra Ruiz (Margaret) pull this form of stagecraft off with abandon. Their pacing and timing and stage movements are impeccable. The sadness of their story is sprinkled with humor, at times, as they play numerous characters and the story they tell keeps you spellbound. Each actor, once revealed, gives you the sense that you are in for one hell of a ride. The play moves quickly from the opening through the ending with a skill that you might want to return for seconds. I personally love movement on stage and under the strong direction of James P. Darvas you see that he has created a work of art…a painted picture that moves with impressive movement and deep messages that might ring true today. His impeccable sense of detail and shining movement makes you want the play to continue longer. Having watched this director grow with each project over the years is personally heartfelt. He gives everything mentally and physically to his work and the product is always superb! The work that is needed to bring a script to the stage with honesty and believability is something he doesn’t take lightly.

In Drowning Girls, Darvas has assembled not only a terrific cast but a crew as well. Scenic Designer Hsi-An Chen has splendidly set the mood. As you enter the theatre there is white soft fabric hanging all around the stage, and three bathtubs. The mood is also set by the beautiful scary-soft lighting, bold when it needs to be, and the music is foreboding. My favorite bit of music was the haunting theme used in Vertigo, and Sound Designer MaeAnn Ross makes you notice the sound that seems to be all around you. You know you are getting ready for some solid theatre. Kaylynn Sutton’s Costume design is perfect with simple soft fabric (representing wedding gowns and other costumes) which handles the water and at the same time (forgive me) titillating to the senses. Kevin “Blax” Burroughs Lighting Design is very eerie and sets the tone of what we are watching on stage. Rounding out the perfect crew is Stage Manager Leviticus Padilla, Assistant Stage Manager Katherine McLeod. The direction, the set, the lighting, the sound, the costumes, and the crew that keeps the water a major character in this production should once again…not be missed!

OnStage Playhouse…a new look under Executive Artistic Director James P. Darvas…theatre worth talking about! And you will!

Jerry Pilato is Artistic Director for Point Loma Playhouse in San Diego and a temp blog writer for The Hollywood Times. jerryadplp@gmail.com