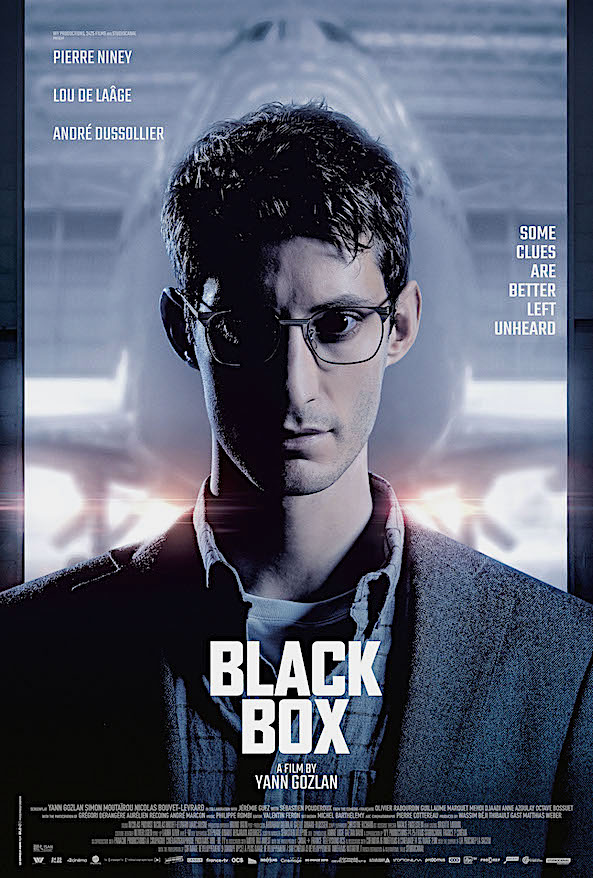 Los Angeles, CA (The Hollywood Times) 11/6/21 – On Friday November 5 at the COLCOA French Film Festival in Los Angeles, the biggest draw at the Renoir Theater of the Directors Guild of America was the North American premiere of Yann Gozlan’s Black Box (Boître Noire, 2021). This French-language thriller is a rollicking ride that will inevitably be snapped up by a U.S. studio and turned into a slick but inferior remake with half of the originality for twice the production price. In Black Box, writer-director Yann Gozlan has created a taut, suspenseful story of intrigue in the aeronautics industry, all related to the tragic crash of a European airliner which killed all 300 passengers on board on a Dubai-Paris flight. Matthieu (Pierre Niney), a brilliant young black-box analyst with an extraordinarily acute ear is charged with investigating a deadly plane crash. Progressively obsessed by inexplicable evidence that doesn’t add up, and spiraling further and further into the realm of paranoia, he gradually loses credibility at the BEA, the bureau that investigates aviation safety in France. So, he’s forced to go rogue, risking both career and life, but determined to uncover the sordid truth.

In the past, Mathieu Vasseur (Pierre Niney) wanted to become a pilot himself. Only his eyes were too bad for that. To do this, he has learned to use his ears: He is a sought-after black box analyst who is always consulted when a plane crash occurs. This was also the case when a very new plane crashed and more than 300 people died. Mathieu found indications early on that it was a terrorist attack. But doubts remain, something seems to be wrong with the story. The more he thinks about everything, the stranger it all seems to him. He is increasingly obsessed with looking for alternative explanations, which is why his marriage to Noémie (Lou de Laâge) begins to suffer because she too works in the same field of aviation but for a company that manufactures auto-pilot systems for jetliners.

Black Box also plays with fears about a possible terrorist motive for the tragic plane crash, but finds a completely different approach to the subject. The crash has already taken place when we arrive at the opening scene as spectators. Apart from reconstructed scenes, we do not get any insight into what actually happened on board. Because that’s basically what it’ all about: the question of what happened on the plane prior to the crash. Instead of a real-time thriller, the French film is more like a crime thriller with Mathieu trying to find out the real truth about it. He, like the other investigators with BEA, looks for traces, asks questions, and tries to hypothesize. Little by little, a picture begins to form from these individual pieces of the puzzle. Of course, it takes time before the audience can discern what really transpired.

Yann Gozlan combines classic elements of a crime thriller with a paranoia thriller with some rather unusual trappings. Not only is a black box analyst a rare protagonist in this genre. The procedure is also quite unique: a large part of the investigations with the Black Box take place in endless acoustic analysis of sounds. Even as Mathieu becomes more active and ends up driving in search of a disappeared work colleague in the countryside, it still comes down to Mathieu’s ability to sit in front of a computer screen with headphones, trying to make sense out of scraps of noise. Visually, this may not seem very exciting. But the fine score helps to heighten the dramatic impact of such scenes, as the audience is forced to listen to the humming noises and attempt to understand the abstract graphics on the screen.

The second half of Gozlan’s film moves away from this crime scene, focusing increasingly on what is a paranoia thriller with minor dramatic elements. We learn that Mathieu has made a misjudgment of evidence in a plane crash in the past and at the time, he got completely lost in the process of trying to out-guess the evidence. Now, he chases after various possible theories and the best explanation remains open until the very end of the film. We begin to wonder if Mathieu is just a weirdo lost in delusions. Or are there really some sinister people at work behind the airline crash who will stop at nothing to hide the truth about the cause of the crash. The boundaries between reality and imagination in Mathieu’s imagination are tested repeatedly. He keeps trying to visualize the events on the plane – and so much, he himself becomes a part of it.

Yann Gozlan was present at the screening of Black Box for a short Q&A and talked about his passion for cinema. His first feature was the horror film Caged (2010), which nabbed Best Film and Best Actress Awards at Screamfest in L.A. His psychological thriller, A Perfect Man (2015) also starred actor Pierre Niney. His third film Burn Out (2018) can be watched on Netflix, if you are interested. Black Box has won Audience Awards at several Film Festivals in France