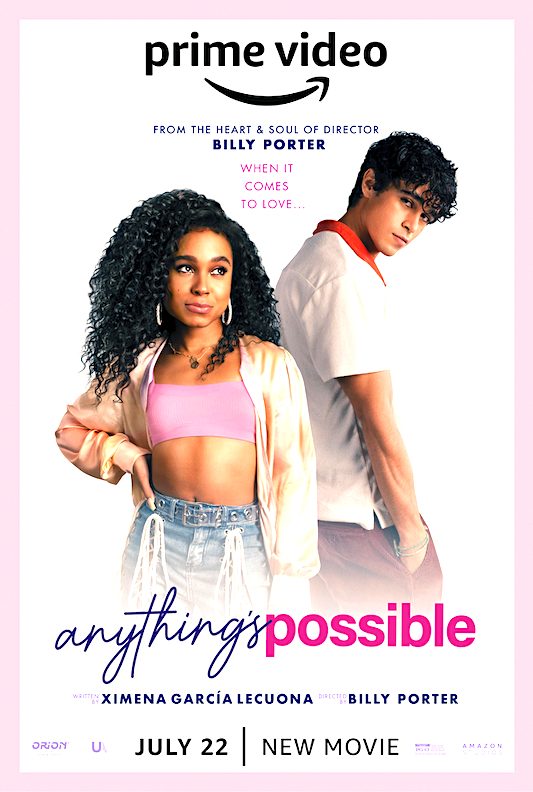 By Valerie Milano and Jim Gilles

Los Angeles, CA (The Hollywood Times) 7/15/22 – Times change and so does the Outfest Film Festival in Los Angeles – which is celebrating its 40th year as an organization dedicated to creating visibility to diverse LGBTQIA+ stories, empowering storytellers, and building empathy to drive meaningful social change. This was quite evident at Outfest’s Opening Night Gala at the Orpheum Theatre in Downtown Los Angeles on the night of July 14, 2022, when the featured film was Billy Porter’s directorial debut with Anything’s Possible and the 2022 Outfest Achievement Award given to Billy Porter for his dedication of queer empowerment. In a long evening at the Orpheum Theatre, it was really Billy Porter’s night to shine and he did not disappoint, offering a moving speech about his own beginning in Pittsburgh as a young black queer man who found his way to Broadway and Hollywood through dedication to his own vision of being himself, despite the challenges and roadblocks. Well-known amongst LGBTQ+ audiences, Billy Porter is best known for his role in Ryan Murphy’s Pose (TV Series, 2018-2021, but he credited his beginning to a start to his role in Greg Berlanti’s romantic comedy The Broken Hearts Club (2000), which aired at Outfest that year.

In a gracious, fiery, and predictably humorous acceptance speech for the Outfest Achievement Award, Billy Porter asked the large audience to rethink the messaging needed for our time. Porter said, “We thought we won something – the Democrats, the progressives – we got civil rights, we got Roe v. Wade, we got marriage equality, all the rest. We got a Black president and then we all sat on our asses and ate Bon Bons for eight years and then the unthinkable happened. We lost our vigilance. It’s time for us to take that shit back.”

In 1979, John Ramirez and Stuart Timmons, two students at the University of California, Los Angeles (UCLA), founded a gay film festival on campus. By 1982, it had become known as the “Gay and Lesbian Media Festival and Conference.” The name was changed to Outfest in 1994. This year in celebrating its 40th anniversary, Outfest chose to honor the “architects” of Outfest – those filmmakers who have made a significant contribution to sharing LGBTQ+ stories through the organization, its film festivals, its archival work, and its support of new, aspiring filmmakers. John Ramirez was there to share his experience of the early days of Outfest and its origins at UCLA. Outfest has always tried to look forward and offer a vision of where we should go as artists and filmmakers.

Porter’s directorial debut Anything’s Possible, a coming-of-age rom-com about a Black trans girl in high school falling in love for the first time, opened the festival. The story is centered on Kelsa (Eva Reign), a confident schoolgirl with a solid group of friends, a supportive mother (Renée Elise Goldsberry), a hatred for the word “brave” and a passion for anything to do with animals. Hoping to eventually find a job in wildlife photography, first she needs to navigate the tricky situation that is her final year at high school. A trans girl, Kelsa feels like gender is all someone sees when they look at her, and wants to show the world she’s more than just that.

When we first meet our main character, she’s creating one of her many YouTube videos where she talks about her love for the animal kingdom and also touches on her life as a trans person. Kelsa has a loving and supportive mother, who is a physician in a Pittsburg hospital and a single mother after divorcing Kelsa’s father. Her mother doesn’t approve of Kelsa’s YouTube videos for some reason, her friends or her immediate friends at the local high school – Megan (Simone Joy Jones) and the feisty blonde girl (Kelly Lamor Wilson) who dyes her hair blue. In a too-cute scene in an art class, Kelsa ends up paired with Khalid (Abubakr Ali) for a portrait painting exercise. And out of the assignment, a romantic interest is kindled between the two.

Largely through Kelsa’s video chats with a group of trans people online, we discover the puzzle pieces of her trans journey so far; but soon Khalid, who loves to ask questions on Reddit about life and love, chances upon Kelsa’s video chats and realizes that she is actually trans. Then he has to decide what that means for him, as he finds Kelsa to be an interesting person and soon develops a teenage crush on her. The story takes place at the local urban high school and at the Phipps Conservatory and Botanical Gardens in Pittsburgh, the latter being the more romantic setting of key scenes in the film. Director Billy Porter wanted to embed aspects of his hometown of Pittsburgh into the film and in some ways, it is a homage to Pittsburgh.

The trio of female friends at the beginning of the film harken back to Amy Heckerling’s Clueless (1995) and other teenage romcoms set in imaginary affluent high schools, where anything goes with student dress. Khalid, played so well by Abubakr Ali, is the typical smitten and bumbling young man who is not sure of what he wants in life beyond high school. His parents are Egyptian and probably Muslim, although religion does not enter into the film at all. They hope that Ali will study business in college, but he is more interested in art and seems attracted to industrial design. On the other hand, Kelsa, whose obsession is biology, sees the world through very different lenses – focused on the similarities between the animal kingdom in its diversity and human diversity. Both young persons are supposed to be preparing their essays that are part of the standard university admissions process. But neither seems to know what to write about.

Anything’s Possible’ is very wholesome fare, especially in the relationship between the leading couple, and both of them with their parents and family members, but it has got its moments of dramatic interest which are quite topical in terms of social issues with trans people today. One moment sees Kelsa ousted from the female changing rooms due to “concerns,” while another sees Khalid get into his fight with a friend for their own insecure reasons. The story points aren’t revolutionary, but they do highlight people’s egos not wanting to be bruised when something changes in their lives.

Accepting oneself and those around them isn’t something that comes naturally to anyone, but Anything’s Possible does hit home the bigger complexities that come with being a transgender female who is also a person of color. Under Billy Porter’s playful eye, the cast is given room to have fun with the script and bring a level of tenderness to those more emotional and vulnerable beats too. At the screening, the audience, which was quite a noisy bunch, reacted gleefully to the romantic tenderness of scenes and also the awkwardness of the lead characters. Clearly Anything Possible offers little new in the arena of coming-of-age movies, but it is an uplifting tale.

The evening opened with a red-carpet media event at the Orpheum Theatre presented by Outfest in conjunction with Orion Pictures and Amazon Prime, as well as other major sponsors including Discovery, IMDB and Comcast NBCUniversal. After the screening of Anything’s Possible, Outfest had a large outdoor party behind the Orpheum Theatre where filmmakers, industry people and supporters mingled. Anything’s Possible will begin screening online with Prime Video on July 21.