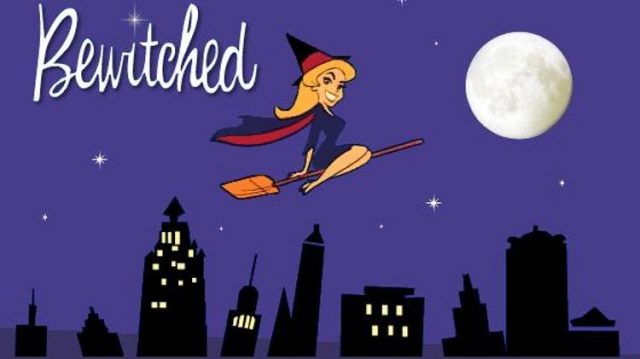 TV Reboots aren’t going anywhere. Last season saw the re-arrival of Will & Grace and Roseanne, while this year’s new addition is Last Man Standing. But then there are the true reboots (taking show concepts and bringing them back with updated premises and new casts), like Hawaii 5-0, MacGyver, and S.W.A.T., and this year’s Magnum, P.I. and Charmed. Now comes word that one of the most beloved sitcoms from the 1960s — and one that is still enjoying life in reruns — is being given another shot at life, Bewitched.

The premise of the show is that on her wedding night, Samantha Stevens (Elizabeth Montgomery) reveals to her new husband, Darrin (Dick York), that she is, in fact a witch. Initially feeling betrayed, Darrin ultimately realizes that he loves her deeply and they try to settle down into a normal domestic life. Fat chance! From 1964-72, Samantha promised not to use witchcraft, but always found herself in situations where she had no choice, or it was forced upon them by family members like her estranged parents, Endora (Agness Moorehead) and Maurice (Maurice Evans), Uncle Arthur (Paul Lynde), and even her cousin, Serena (also Eizabeth Montgomery). Eventually added into the mix was Sam and Darrin’s daughter, Tabitha (Erin Murphy), and son, Adam (Greg and David Lawrence).

The proposed new version, which has been given a pilot commitment by ABC, comes from Black-ish creator Kenya Barris and writer/producer Yamara Taylor. In this version, Samantha (still a witch) is a hardworking black single mom who marries a white mortal named Darren, who is something of a slacker. Offers a description from Deadline, “They struggle to navigate their differences as she discovers that even when a black girl is literally magic, she’s still not as powerful as a decently tall white man with a full head of hair in America.”

Not entirely surprisingly, the interracial aspect has gotten people talking on message boards, and not all in a positive light. That being said, for writer/producer Herbie J Pilato, author of several books about Bewitched (Bewitched Forever) and Elizabeth Montgomery (Twitch Upon a Star), it’s actually the perfect representation of the show for today’s audience.

“It speaks to what the core message of the show has been all along: prejudice,” he explained to Closer Weekly in an exclusive interview. “Samantha and Darrin loved each other despite their differences. She loved him for who he was and not for what he could do for her, because whatever he could do for her, she could twitch up something better. She loved him for him and not his stature or money or position. Meanwhile, he had a strong ethic, which is why he wanted to hold back on the magic. He wanted to work to give her everything she deserved. It was a ’60s mentality, and many thought Samantha was kowtowing to her husband’s will, but the truth of the matter was it was her choice to marry and stay home and care for the household. In this sense, she was one of the most independent women of early television.”

Elaborating on the themes of prejudice — no doubt a topic that the new version will be fully embracing — he points to an episode of the original series titled “Sisters at Heart,” which was actually written by a multicultural group of students from Los Angeles’ Jefferson High. In that story, Tabitha befriends a young African-American girl, with whom she gets along great. But when they’re playing in the park, a group of bullies tells them they can’t be sisters, because they don’t look alike. Trying to make them the same color, Tabitha gies her friend white polka dots on her skin and Tabitha black ones on her own. At episode’s end, the spell is reversed, but Samantha comments to Tabitha, “All men are brothers… even if they’re girls.”

“It was an amazing moment, and the episode won the Governor’s Award at the Emmys that year, 1971,” Herbie enthused. “The Bewitched theme of prejudice speaks to all minority groups, including the gay and the disabled communities, both of which Elizabeth Montgomery dedicated her time and effort to in many charitable ways. In chronicling the show with several books, I discovered how truly layered and textured and smart Bewitched really was and remains in the 21st Century.  Shows like this one matter; what they taught us about ourselves shaped our thoughts, our culture, and our nature, but with Bewitched particularly, it did so with laughter at a time when we needed it the most.

“I really feel that, as an art form, Bewitched is worthy of respect and admiration,” he added, “and that ABC’s new interracial version will take all of it to a new level in the most wondrous and — yes — magical of ways.”