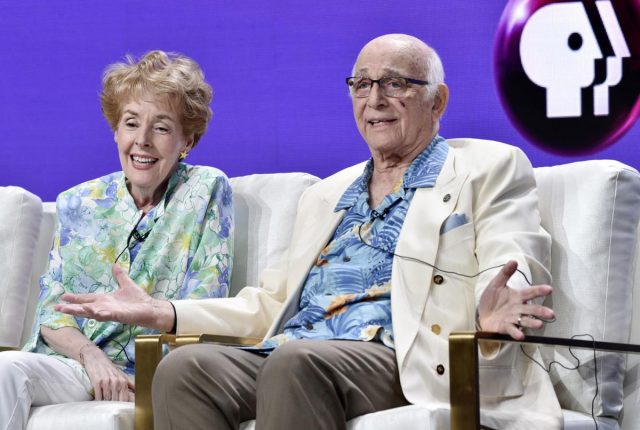 Beverly Hills, CA (The Hollywood Times) 8/19/18 – To hear Betty White tell it in her own words, an entire television career just fell, rather graciously, into her lap.  To hear her peers in Hollywood tell it, she’s put in the years, blood, sweat and tears, and deserves the respect to match.

Director and producer Steven J Boettcher, in fact, feels so strongly about it that at a recent Television Critics Association panel, he publicly gave her what amounted to a free pass.  “After 80 years in show business, she deserves a day off,” he said when asked if she’d be attending.  “So we gave her the day off.”

“Betty White: First Lady of Television” airs on PBS Tuesday, and it’s a wealth of information on the broadcast matron’s contribution to the industry.  As a documentary filmmaker, the experience of making the doc, was, Boettcher told his audience “the top of the mountain.”  He’s not alone in his assessment.  In Boettcher’s film, Jennifer Love Hewitt, Ryan Reynolds, Tom Sullivan and Mary Tyler Moore, among others weigh in on White’s extraordinary career both in front of, and behind, the camera.

“Betty White provided us with a master class on staying relevant, current, in a constantly changing business,” he added.  “She’s been an invited guest in people’s homes for the past seven decades, and that’s lucky for the rest of us.”

Now, along with Boettcher, White gives us a chance to look back at highlights in both her personal life and her career with PBS’ airing of the breezy, whimsical, and often touching, biographical piece.

It begins with a generous slice of “Life With Elizabeth,” a little-remembered, 2-season live broadcast sitcom; White’s brave, and sparkling, initial foray into the industry.  She played a typical suburban wife who, together with her husband Alvin, met her share of atypical predicaments.

White received her first primetime Emmy Award nomination for her role on the series; more fascinating still, it’s innocence—which carried through to her role as Rose in “Golden Girls”– was indicative of what the public would come to associate with Betty.  And what would make her comeback in surprise appearances in later years (on shows like Saturday Night Live and the roast of William Shatner) so utterly, unexpectedly, hilarious.

But White’s roles through the years varied.  She also played the nymphomaniacal “Happy Homemaker” Sue Ann Nivens on the Mary Tyler Moore Show in the 70’s, and appeared and hosted on game shows including Password (where she met her beloved husband Allen Ludden), Just Men! and The Match Game.  Then there was The Betty White Show, The Carol Burnett Show, Mama’s Family, The Golden Palace, The Practice, Ugly Betty, and even a turn on the soaps in The Bold and the Beautiful.  She even played opposite Ryan Reynolds and Sandra Bullock with a turn as an unhinged grandma in 2009’s The Proposal.

All of it has simply solidified her as an iconoclast.

Whichever direction she turns, she never fails to surprise.  A point Boettcher accurately circles around again and again, is the fact that White has an uncanny, and rare, gift for comedic timing.  It’s unanimous among those who’ve worked with her.  So is her legendary humility.

“When you think about what makes a great ensemble actress, it’s someone who can leave their ego at the door,” says Tom Sullivan in one of a plethora of documentary interviews.

White’s virtues, White’s talents, White’s accomplishments are difficult to ignore—Boettcher has to dig deep to get to anything negative, and when he does, one can’t help but get the feeling he’s scratched a surface that may be much deeper.

White’s beloved late husband Allen Ludden (the final of three, and the only one effectively mentioned here) practically had to beg for her hand in marriage; proposing repeatedly for over a year and a half before she finally accepted. White admits, tearfully, in her own on-camera interviews, that she shouldn’t have resisted his overtures for as long as she did.

“It suddenly dawned on me I was going to spend the rest of my life without him because of my stubbornness,” she says.  “So sure enough, we got married.”

Emphasizing White’s regret in the midst of a documentary about an inherently funny, cheerful woman, is a powerfully humanizing element, and it brings the piece full circle.  Without something to ground her in reality, it’s difficult to understand her enormous success.  White is, as so many of her peers describes her, a legend.  Film, television, radio, variety hour.  Any decade, any medium, any hour of the day.