Los Angeles, CA (The Hollywood Times) 2/23/22 – Film directors have been exploring their own childhood memories on screen for decades, and the honor roll of notable films that have come from that exploration ranges from Francois Truffaut’s The 400 Blows to George Lucas’ American Graffiti, from Louis Malle’s Au Revoir les Enfants to Cameron Crowe’s Almost Famous, Mike Mills’ 20th Century Women to Lee Isaac Chung’s Minari, from John Boorman’s Hope and Glory to Alfonso Cuaron’s Roma (2018). This year Paolo Sorrentino did the same with his The Hand of God (Italy, 2021) and writer-director-actor Kenneth Branagh has now tried his hand at the genre, and to say that Belfast brings out the best in him would be an understatement. Visually stunning, emotionally wrenching, and gloriously human, Belfast takes one short period from Branagh’s life and finds in it a coming-of-age story, a portrait of a city fracturing in an instant and a profoundly moving lament for what’s been lost during decades of strife in his homeland of Northern Ireland. It’s also quite funny – because if anybody knows how to laugh in the face of a tragedy like the Irish. 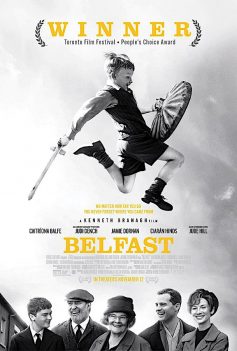 The film opens with panoramic, full-color shots of the city today, but then it sinks over a wall and into a black-and-white street scene from 1969, with kids playing and adults shouting in a scene of bustling life that seems too bustling and too perfect – except that this is the memory of 9-year-old Buddy (Jude Hill), so of course some after-school street football seems like an unfettered delight. But then, with shocking suddenness, the street is filled with angry men shouting, breaking windows, and blowing up cars; it’s chaotic and confusing to Buddy, and so it is to us, too. There’s no context, no explanation of the Northern Ireland riots of August 1969 – it’s just Protestants trying to drive Catholics out of a community where Buddy’s dad insists, “There is no our side and their side in this neighborhood.”

On one level, the film is about a family torn between staying in the home they know and fleeing for the sake of the kids. Jamie Dornan plays the father who is forced to travel to England on work for weeks at a time. Cairtíona Balfe is the mother who raises the kids in his absence and never appears less than radiant in Buddy’s eyes, and they’re both pitch-perfect. Meanwhile, Judi Dench and Ciarán Hinds play the grandparents with a quiet virtuosity that summons up a lifetime of shared history in the smallest gesture or the simplest line. And as Buddy, Hill not only looks like what you think Branagh probably looked like at that age, he’s the most watchable person on the screen even when he’s sharing it with stars and legends.

The family’s dilemma could easily consume the film’s crisp 97-minute running time, but one of the pleasures of Belfast is the way it shows life going on even with barbed wire and barricades at the end of the block. Buddy may be worried about his parents moving the family to England or Australia (or the moon, for that matter), but he’s just as concerned with impressing the cute girl at school. The movie bursts with life, with jokes and threats and tragedy and comedy all mixed up into an occasionally sentimental but irresistibly moving blend – and it also bursts with a love for movies themselves, as the family makes regular trips to the local cinema to see Chitty Chitty Bang Bang or One Million Years B.C., and as Buddy and his brother sneak peeks at High Noon” and The Man Who Shot Liberty Valance on the TV.

Some viewers may have trouble stomaching music chosen by Branagh for Belfast. Van Morrison’s voice seems to be the soul of Northern Ireland, and his contributions to Belfast are essential. He wrote one new song for the opening credits and supplied a number of other songs that are used throughout the film – not the ’60s numbers you might expect in a movie set in this era, but ’70s and ’80s songs that feel emotionally right even if they’re from another time. Morrison also wrote saxophone-based instrumentals that serve as the film’s score, and they’re lovely and haunting.

As a film about memories of a childhood, there is quite a bit of romantic claptrap in the film – which, in some way, is a very Irish kind of thing. The historical context is vague and confusing. Buddy’s fright after a hellfire sermon is clearly borrowed from Joyce’s Portrait of the Artist as a Young Man. The religious clash concerning “civil rights and civil war” goes unspecified, except as Buddy’s school friend misinterprets it. Branagh’s Buddy does not seem to understand what is going on with the struggle. The argument over ethics, ethnicity, and manhood feels gimmicky. When unclear, Branagh filters Buddy’s memory through Hollywood motion pictures. Branagh reduces issues about ethics to trite metaphor, using clips from High Noon and The Man Who Shot Liberty Valance on TV. (We hear High Noon’s theme song “Do Not Forsake Me, Oh, My Darling,” in which Hollywood fake lore became real lore, but not this time.)

Don’t get me wrong: Belfast is a beautiful and moving coming-of-age story. But it fails to capture the deeper universality of other Irish-ethnic movies about this same period of Irish history, like one sees in Terence Davies’s The Long Day Closes, John Boorman’s Hope and Glory, and Jim Sheridan’s In America. The movie-going experience of Buddy’s family seeing Chitty Bang Bang is probably the silliest part of the film, although the funeral celebration seems oddly edited. The strengths of the film’s opening seem to peter out in the last 30 minutes into Hollywood-style manufactured nostalgia.