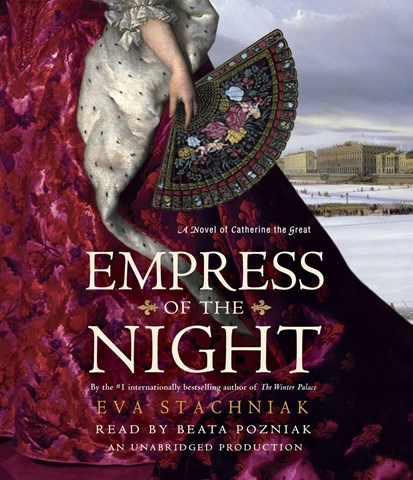 A follow up to Stachniak’s bestselling The Winter Palace: A Novel of Catherine the Great, also narrated by Poźniak, Empress of the Night continues the story of how a shy awkward German princess named Sophie became the powerful Catherine the Great. But whereas The Winter Palace employed the clever narrative device of using Catherine’s faithful servant Varvara to tell her tale, in Empress of the Night Catherine herself takes center stage as she relives her astonishing ascension from unlikely princess to the most powerful and feared woman of her time.

The book opens with Catherine suffering the stroke that will soon kill her. As the suffering monarch lives out her final hours, she recalls her heartbreaks and triumphs in love and politics, flashing back to various vignettes of her tumultuous life. The novel’s complex structure and huge cast of characters called for a narrator with an impressive range, and Pozniak certainly delivered. Her wonderfully expressive voice and authentic Eastern European accent were the perfect complement to the psychologically intense novel. Arthur Insana, who directed Poźniak’s performance, is a multi-award-winning director for Penguin Random House who has worked with many audio book “stars” including Alfred Molina, whose The Chopin Manuscript was a finalist for Audiobook of the Year. Insana praised Poźniak’s performance, saying “one of the greatest pleasures I have in working with narrators who come from an acting background is their ability to fully and harmoniously engage the art of storytelling through the music of their emotions. Beata is one of the most passionate and melodious narrators I’ve ever had the privilege of working with. Her understanding of story and character is remarkable…and her ability to transport the listener into theatre of the mind is mesmerizing. There is a symphony in her soul… and in her voice.”

At a time when more and more A-list actors are becoming interested in doing audio books (http://www.hollywoodreporter.com/news/nicole-kidman-anne-hathaway-kate-winslet-audiobooks-242298 ) it’s exciting that a relatively unknown in the field can achieve such success. Seems that Beata Poźniak is the first non-native English speaking narrator hired by the largest publisher in the world – Random House and AudioFile Magazine calls Poźniak “the master of the many accents heard in the palace, especially Russian and German.” Astonishingly, Poźniak found a voice and accent for all 78 characters, including the commanding German Empress Catherine, the clever Polish servant Varvara, and a host of foreign dignitaries from countries as varied as Russia, England, and Scotland. Moreover, Poźniak’s smoke -and -velvet voice somehow manages to perfectly capture the lushness and richly atmospheric quality of Stachniak’s vivid prose. The nineteen hours of narration become a thrilling journey to an exotic place and time.
Already a bestseller in Europe, Empress of the Night, both in print and audio formats, are now available in the States as well. To listen to an excerpt from the The Winter Palace: A Novel of Catherine the Great and Empress of the Night check out: http://www.booksontape.com/narrator/156649/beata-pozniak/