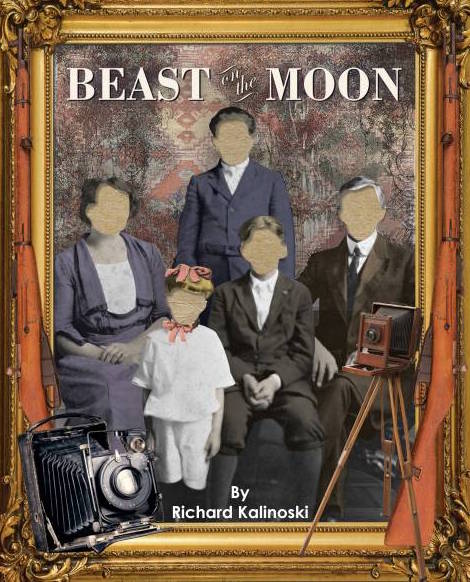 At the International City Theatre in Long Beach, an Armenian mother and her two adult children experience firsthand a drama about the darkest time in their family’s history

Long Beach, CA (The Hollywood Times) 09/04/2019 – It is generally not known in the world that, in the years preceding 1916, there was a concerted effort made to eliminate all the Armenian people, probably one of the greatest tragedies that ever befell any group. And there weren’t any Nuremberg trials.

As an Armenian American, watching this play reminds me that freedom is what makes this country so incredible. It hurts when I see innocent people in other countries today facing the same horrors my father faced during the Armenian Genocide. I am so grateful for the gift of being able to bring up my kids in America. For us, it truly has been the land of opportunity, and I hope it will always be that way moving forward.

When I was asked to review a new production of ‘Beast on the Moon’ at the International City Theatre in Long Beach, at first, I didn’t know what to do. A bittersweet drama about two survivors of the Armenian Genocide, ‘Beast on the Moon’ is the haunting masterpiece of playwright Richard Kalinoski. Written and first produced in the 1990s, the play has become the iconic account of what happens after the horror and the undue weight of trauma often carried by innocent survivors.

As deftly directed by caryn desai, who is not a fan of capital letters, the play should not be missed. Set in 1920s Milwaukee, the play begins with Aram (Travis Leland), an Armenian immigrant working as a photographer. He arrives at his small apartment with Seta (Rachel Weck), his mail-order bride who is still a teenager. Both main characters are deeply scarred survivors of the Armenian Genocide, trying to build a life in a new country. How they choose to build this life, however, is where they separate. Indeed, a stark gulf exists between her desire to forge something new and his determination to recreate a buried past. This conflict lies at the heart of the drama.

‘Beasts of the Moon’ has the distinction of being the winner of the Khorenatsi Medal. As Armenia’s highest cultural award, the medal is presented by the country’s president to the rare artist, writer, or public personage who helps to advance Armenian culture. It is considered a landmark by the people of the country. Given such a pedigree, the play deserves a thoughtful take from any reviewer.

There is no historical 20th-century atrocity, however, that I know less about than the Armenian Genocide. Yes, I can look it up on Wikipedia and learn the facts. I can learn that the Armenian Genocide was the Ottoman Empire’s systematic extermination of 700,000 to 1.5 million Armenians. As Wikipedia explains, “The genocide was carried out during and after World War I and implemented in two phases — the wholesale killing of the able-bodied male population through massacre and subjection of army conscripts to forced labor, followed by the deportation of women, children, the elderly, and the infirm on death marches leading to the Syrian Desert. Driven forward by military escorts, the deportees were deprived of food and water and subjected to periodic robbery, rape, and massacre.”

Given the extremity of such details, how can I relate to the deeper substance of the play? Of course, there is the argument that great art transports you to a place of empathic experience. When it comes to a play about an atrocity of such magnitude, I feel like I have to do something more. Although it may not be my direct experience, I want to access something more tangible. Indeed, I feel as if I need a more visceral response by a person directly affected by these events.

Searching Facebook for references to the Armenian Genocide, I find a few local friends of Armenian descent and begin to contact them. The one person that responds to my message turns out to be perfect. A friend from the Bourgeois Pig coffee shop in Hollywood, Alex Brisbin is grateful for the opportunity. It turns out that his grandfather George Ghazarian was a survivor of the Armenian Genocide. Alex’s mother Lorraine Ghazarian was born and grew up in Brooklyn as the daughter of first-generation immigrants. Since Lorraine now lives in Orange County, Alex asks if she and his sister Debbie Brisbin Penko can come as well.

Knowing it will be a unique experience with the family present, my only stipulation is that I want to have dinner with all of them before the play. It makes sense to get to know Lorraine before the play to create a comfort zone of communication. Meeting up at Gladstone’s Long Beach two hours before the play, we break bread together, and Lorraine talks about what it was like growing up with her father as a survivor.

A kind and loving man, George Ghazarian was all about family. The rituals of being together were paramount. When he got home after work, every family member had to be home as well. He knew how precious was their time spent together. George had grown up in what is now Turkey, and his family lost everything during the Armenian Genocide. He was just a boy when the horrors began.

The soldiers came and took his father. It was the last time George ever saw him. By then, it was known that such forced conscription meant certain death. After his father was taken away, his mother realized they had to leave. Trying to walk out of the country, George later recounted how the Turks denied them food for many days. His baby brother Arman died of starvation as George tried to feed him the last crumbs of stale bread. George could not even bury Arman. If you tried to dig a grave, the Turks would bury you in the hole as well. On the road, he had no choice but to toss the tiny body of his brother aside. Lorraine says it was the hardest moment for him to recall.

Later, when the Turks were murdering every Armenian boy, regardless of their age, George was forced to dress like a girl. Such careful deception allowed him to escape to Syria with his mother and sisters, but it was a shameful experience, particularly at that time and in that culture. However, the deception worked, and the journey eventually led all of them to America. Although they lost so much, they still had each other. Unlike George and the rest of his family, the two survivors in the play have nothing but each other.

Indeed, Aram and Sita have lost everything, and they now only have the other. But they don’t even know each other. From the very start of the play, the gulf between them is evident. As crafted with precision by Travis Leland, Aram is a rigid man who fights off the darkness of the trauma within by making rules and holding tightly to the past. He believes that through force of will he can recreate the past. In their apartment, he institutes the rules of his father and insists on keeping outdated family traditions alive.

Aram keeps a stark blown-up picture of his family with the heads removed as a centerpiece in the living room. The heads of his mother and father are replaced with his picture and a picture he takes of Sita upon her arrival from the Armenian refugee camp. Aram is recreating the buried past at all costs, but he will not be able to transcend their inability to have a child. After bad news from the doctor, she apologizes for starving when she was a child during the Armenian Genocide: It is said that such starvation often leads to infertility. Although he buys a beautiful baby carriage to inspire pregnancy, it remains empty.

In contrast, Sita bubbles with energy above her tragedy and her inability to have a child, desperately wanting to start over in the new world and move beyond the shadows of the past. Impressively developed and portrayed by Rachel Weck, her energy is the heart and soul of this production. Despite setbacks and sadness, she drives the play forward, refusing to allow the trauma of the Armenian Genocide to engulf and devastate the dream of the present day.

This essential conflict is apparent from the moment we enter the theater. With the apartment in the center, the metaphorical ruins of the past lurk overhead. Also, the bones of the dead are abandoned below. There is no question that the past haunts the present in the new country. Sitting next to me, Lorraine is affected by the fine work of set designer JR Norman Luker. As the couple battles each other and their demons, struggling to find a new equilibrium together in America, Lorraine appears to be moved by the story. In the main characters, she sees reflections from her past.

During intermission, she mentions how her father was a bit like both of the main characters. Like Sita, he chose to leave the past in the past, moving beyond the tragedy of what happened to forge a new life in America. If you had met George without knowing his history, you would not have imagined the trauma of his childhood. Like Aram, however, George Ghazarian believed that family was paramount and instituted rules to make sure that his values were respected and followed.

Unlike George in real life, however, Aram has such difficulty moving beyond his trauma. Both Aram and Sita were not only left orphans by the Armenian Genocide: they lost every other member of their respective families. They lost everyone. Unlike George, they both were left entirely alone. Sita survived because her older sister sacrificed herself to protect a little girl. Aram had to find his way out of the horror of his family’s decimation by himself, his father’s stamp collection in hand. Shamefully, Aram recalls only being able to escape and cross the border because he was dressed like a girl.

In the end, fiction and reality come together to illuminate the truth. After the play, when asked about that moment when she heard her father’s story in the lips of a fictional character, Lorraine says she was overcome with emotion. Asked about this moment, Lorraine states, “Hearing the character’s story meant so much to me because I could feel what happened to my father in reality. I had heard that story of my father dressing as a girl so many times while I was growing up, but it was just words and difficult to picture. When I heard it recounted in the play, I really could see it for the first time. I felt like I connected to my family and my father’s struggle in a whole new way.”

Such a connection is what this journey is all about. A play about the Armenian Genocide is seen by a woman whose father survived the actual horror. In the best possible outcome, both perspectives are enrichened by the experience as art nourishes the living and life gives meaning to artistic expression.

Note: I want to thank Lorraine Ghazarian, Alex Brisbin, and Debbie Brisbin Penko for their willingness to take part in this journey. It proved so rewarding — John Lavitt

THE DINAH 2022: A QUEER HUMAN EXPERIENCE LEAVING US ALL FEELING EPIC AND CONNECTED