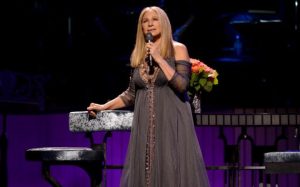 Los Angeles, California (The Hollywood Times) 8/3/16 – What a fantastic and magical concert Barbra Streisand gave to all her faithful fans at the Staples Center last night.  I have never been to a Barbra Streisand concert before and was so thankful for my seatfiller family for giving me the opportunity to see her live for free.  My seat was only 45 feet from the stage, third row off the floor and sat where the entertainment stood before going on stage with Ms. Streisand. 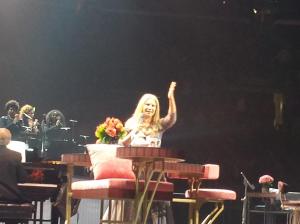 She played for a sold-out crowd and let me tell you, she did not disappoint anyone there.  Her stage was decorated like possibly her sitting room at home with a round gold legged table with a beautiful fresh flower arrangement on top of each table.  The nice size chair with a mauve colored plush seat and wood strip for your back to rest upon with matching pillow and a matching stool. There was a teapot, teacup and saucer on each table for her to enjoy throughout her performance.  She stood mostly front and center and sat on a nice looking padded stool for some of her numbers.  The picture here shows her waving to the crowd and shows the set up. 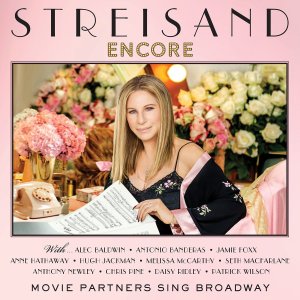 Throughout the show, projected images from her favorite films, album covers, she explained why she chose the pose and outfits used for each album cover and those stories were quite interesting and truly got many laughs.  When the iconic “A Star is Born” cover popped up onscreen, showing the image of Streisand and Kris Kristofferson, she smiled and said “if you’re wondering what I was wearing during that shoot…(laughter)  it was musk”.  At one point, she showed two pictures of “The Way We Were” cover and mocked the photo-shopped version by saying “see my nose there?” pointing at the cover, “it’s not mine.  If I wanted a nose job, I’d go to a doctor not a re-toucher.  We’ve been through a lot together, me and that bump. The record company promised to fix it. I’m still waiting.”  She was on her A game last night.

Videos from the making of her newest duets album Encore which feature tunes with the likes of Foxx, MacFarlane, Chris Pine, Daisy Ridley, Alec Baldwin, Anne Hathaway, and more. And in the behind-the-scenes clip of recording “I Can Do Better” with Melissa McCarthy, the Ghostbusters star asked: “Is it true you have a Starbucks in your house?” Streisand answered, “It is.” McCarthy continued, “And that all the employees have to wear cashmere?” before Streisand burst out laughing as well as the Staples audience.

For those in attendance that did not know as much about her as they thought, were pleased to find out all the great performances she was involved in and some great stories in her distinguished career.

At one point, Streisand brought mentalist Lior Suchard onstage to do some mind game tricks with audience participants, which he selected by throwing out plastic rings, Frisbee style, into the crowd.  It was some really great mind games!

Streisand’s first star to join her onstage was eleven-time-Grammy winner Kenny “Babyface” Edwards to soulfully sing “Evergreen (Love Song from A Star is Born),” off her last duets album, 2014’s Partners.  Ms. Streisand said she was first enamored with him after hearing “Waiting to Exhale,” while Kenny nervously spent most of his time on stage apologizing for being so incredibly star-struck during their first meeting that he didn’t remember a word he said.

Mr. Crooner Seth McFarlane also appeared on stage for perfect harmonies on the Willy Wonka classic “Pure Imagination,” which they did this duet on Streisand’s new Encore album being released August 26th.

Jamie Foxx hit the stage for a duet of The Sound of Music’s “Climb Every Mountain,” which also appears on Streisand’s new album Encore. He addressed the crowd: “Make some noise right now for Barbra!” before offering up a few falsetto bars of “Memories.”  Streisand said of Foxx “Deep. Soulful. Magic.”

“The Way We Were”
“Everything”
“Being at War With Each Other”
“Everything Must Change”
“Stoney End”
“Woman in Love”
“No More Tears (Enough Is Enough)”
“Evergreen” (with Babyface)
“You Don’t Bring Me Flowers”
“Being Alive”
“Papa, Can You Hear Me?”
Act II

“Pure Imagination” (with Seth MacFarlane)
“Who Can I Turn To?” (with Anthony Newley via video stream)
“Losing My Mind ”
“Climb Every Mountain” (with Jamie Foxx)
“Isn’t This Better”
“How Lucky Can You Get”
“With One More Look at You”
“Children Will Listen”
“Don’t Rain on My Parade”
“People”
“Happy Days Are Here Again”

Barbra Streisand, who last year became the only recording artist or group to achieve #1 albums in each of six decades, will bring her legendary live performances to 9 cities in August, it was announced by her longtime manager Marty Erlichman. Streisand will perform her hits from each decade plus songs from her new album, “ENCORE: Movie Partners Sing Broadway,” celebrating a career of unparalleled creative achievement.  Every ticket purchased online includes a CD of Streisand’s new album, which will be released later this year.

Streisand’s tour continues through the end of August before Encore debuts Aug. 26.

The tour is presented by Live Nation Global Touring and S2BN Entertainment.

The tour dates include:

ALL TICKETS ARE ON SALE NOW!

The album has a fairly eclectic list of duet partners including those that have sung before (Patrick Wilson, Hugh Jackman, Chris Pine, Jamie Foxx) and a couple that will come as a surprise (Ridley, Melissa McCarthy).

Who Can I Turn To (When Nobody Needs Me) –  Anthony Newley

The Best Thing That Has Ever Happened – Alec Baldwin

Anything You Can Do – Melissa McCarthy

Take Me To The World – Antonio Banderas