Adding to the silent film era theme, the event will take place in Nathan Barr’s space custom-built to showcase Hollywood’s original 1,500 pipe Wurlitzer organ. The pipe organ dates back to 1928 when it resided on the Fox lot and was used in classic scores including Journey to the Center of the Earth and Patton. Each of the two part event on May 3rd and 4th, will feature the silent film concert with a pre-concert moderated panel discussion. For an additional fee there are exclusive tickets available to attend an after-concert interview and reception featuring a discussion with the composers moderated by record executive Robert Townson.

Additional limited tickets are available to tour Bandrika Studios and the Wurlitzer pipe organ. Original promotional art for Silent Films Live 2 will be auctioned off each evening.

Bandrika Studios, home to Hollywood’s original 1,500 pipe Wurlitzer organ that dates back to 1928 and will be used in each piece. The studio was designed and built around the organ. There will also be a pre-concert discussion with the composers, moderated by record executive Robert Townson (Varèse Sarabande).

Bandrika Studios also functions as a state of the art recording facility for live ensembles and soloists. Able to accommodate up to 50 players, the scoring stage has masterful acoustic
treatment, and has been described by Peter Cobbin (former director of engineering at Abbey Road Studios) as the best sounding room of its size in the world. Shortly after opening the studio’s doors in 2018, Barr recorded his entire orchestral score to The House With A Clock In Its Walls at Bandrika, with many more projects to come.

Proceeds from the event will go towards Education Through Music-Los Angeles, a local nonprofit that brings comprehensive music education to at-risk children and the countless under-served schools across LA County. 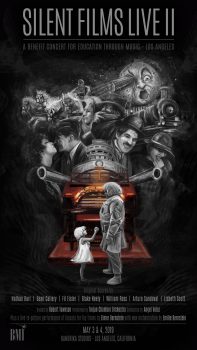 ETM-LA’s In-School Music Education Program provides comprehensive music education to at-risk schools in under-served communities across Los Angeles County. ETM–LA addresses the need for increased resources in arts education through its mission to bring weekly, yearlong, comprehensive music education to every child in disadvantaged, at-risk schools. They work with district administrators, school leaders, and community members to build a culture that embraces music education for every child. In its 13th year, ETM-LA has grown from serving two (2) schools and 800 children to serving 36 schools and 15,000 students across Los Angeles County this 2018-2019 school year. Education Through Music-Los Angeles is based on the ETM model which began in New York City in 1991. ETM-LA continuously evaluates the effectiveness of its programs in Los Angeles to increase its impact and identify ways to better serve schools.