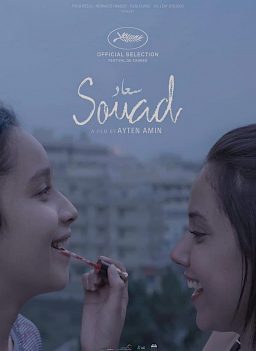 Los Angeles, CA (The Hollywood Times) 12/5/21 – There is definitely an exciting trend in filmmaking from the Middle East and North Africa: It is the emergence of a new generation of female filmmakers. One of those is Ayten Amin, a young Egyptian director, whose film Souad (Egypt, 2021) premiered at the Berlin Film Festival in 2020 and is now Egypt’s official Oscar submission for Best International Feature Film at the 94th Academy Awards. Ayten Amin’s bold second feature is alive to the contradictions of teenage life in conservative Egypt, where the pressures of social media clash with traditional religious strictures, leading to schizophrenic lives of acute unease. The film is remarkable not just for its razor-sharp, nonjudgmental insight, which captures lives as well as environment with a cleareyed neorealist sensibility, but also for the nuanced performances making each character rounded yet ultimately unknowable.  Ayten Amin’s Souad screened at UCLA Melnitz Hall Friday December 3; Ayten Amin was present along with co-writer Mahmoud Ezzat for an insightful Q&A. Amin explained that the actors in the film are all non-professionals from smaller cities in Egypt and talked about how she developed the story with rehearsals over a period of time.

Set within a conservative Muslim community in Egypt, and shot in a verité, handheld style that seems to be reacting to the story rather than making space for it. But there’s a connection between the films in that Souad, too, is about the role of technology in women’s sexuality, from the very specific standpoint of young women coming of age amid the manifold contradictions produced by the injection of smart technologies and social media into traditional societies.

When we meet Souad (played with an elusive sullenness by Bassant Ahmed), she’s telling an old woman on the bus about her fiancé, who’s stationed in Sinai with the army, and his lovely sister; a smash cut later and she’s talking to a younger woman, telling her an entirely different story about her doctor boyfriend and his disapproving sister. Both stories are fabrications. Souad turns out to be living two lives, but not in the sense that she’s actually got boys in different area codes: While in person she appears to be one of the more conservative ones among her friends, she has a long-distance lover, a budding social media star named Ahmed (Hussein Ghanem) – though she might not be his only squeeze, virtual or otherwise.

Souad lives in Zagazig, a nondescript city north of Cairo full of unauthorized constructions which she sees from the balcony of her lower-middle-class family’s apartment. She’s in school yet her life is circumscribed by the expectations of her social class, which means she’s required to spend much of her time in sharing household chores with her mother Nagwa (Mona Elnamoury). She and younger sister Rabab (Basmala Elghaiesh) have a strong yet typically volatile sibling bond, while their father Abdallah (Islam Shalaby) barely interacts with the family. Contact with boys is possible only through her cell phone, which is the most important item connected to her body, far more than her hijab. The phone is her confidante, window and mirror: She sees herself solely through her mobile device, to an even greater degree than her friends, the more provocative Wessam (Hager Mahmoud) and the tradition-oriented Amira (Sarah Shedid).

Souad wears a T-shirt with the slogan “Girls Do Not Dress for Boys,” but while she’d give lip service to that idea, the truth is she longs for the male gaze and yearns to dress in a way that attracts it. She sends streams of suggestive photos and messages to the guy she considers her boyfriend, Ahmed (Hussein Ghanem), a content creator for social media living in Alexandria who’s older and clearly far less invested in the relationship. Then 40 minutes into the film, an unforeseen event upends the storyline (and brilliantly alters traditional narrative expectations), taking Souad physically out of the picture and bringing Rabab to the fore, as she takes a day trip to Alexandria to meet Ahmed.

Amin captures the salient differences between Zagazig and cosmopolitan Alexandria, where the Mediterranean appears to grant a more relaxed atmosphere, yet the dictates of controlling conservatism are still present, making it impossible for Ahmed to find a sufficiently unobservable place to kiss his new girlfriend Yara (Carol Ackad) – a search which, of course, he videos for posting. One of the many strengths of Souad is the way it manages to subtly encapsulate each milieu, building a complex picture of Egypt today that is both loving and critical. A classic example of the former is the playful banter between Nagwa and a woman vegetable seller, making a pleasurable game out of the transaction in one of many scenes that could easily have been lifted from real conversations.

Souad offers insight into the impossible space so many young Egyptian women inhabit, where what’s forbidden by religion is so commonly available virtually, and the hypocrisy of it all creates an untenable tension that crushes the spirit. Amin’s choice of intensely workshopping scenes with unknown actors pays off in spades, ensuring flowing dialogue that feels unscripted and true. Beyond words though, the actors convey knotty inner lives, caught by Maged Nader’s fluid roaming camera that makes the viewer very much a part of this world. Khaled Moeit’s editing is similarly sensitive to the film’s emotional flow.